A conspiracy of ravens fluttered throughout the  Quiet Gallery at the Athens-Clarke County Library on a recent Saturday afternoon. There were also plenty of black cats to be found on the walls and a bevy of beating hearts.

Many of the ravens were made by local fifth graders. All of the works were created by local artists of all ages in response to reading works by Edgar Allen Poe. The Poe-tober exhibit is a celebration of the macabre vision of Poe and is part of the community-wide celebration of his work funded by a NEA “Big Read” grant.

Local poet and UGA professor Misha Cahnmann-Taylor, who secured the grant and organized the events, was beaming at the reception and awards ceremony. “I’m always trying to find the place where teacher education and creative education come together,” she said.

Cahnmann-Taylor introduced the show’s curator, Tatiana Veneruso of TV Gallery, saying “She is a fearless judge.” The stylish Veneruso dressed for the occasion in a purple silk shawl, black lace dress, black fedora and Victorian-like laced up black boots.

In the adult category, third prize went to Samantha Mattox and second prize was awarded to James Greer. Jacob Wenzka, who illustrated a hard bound book for the event and also exhibited some of the individual prints used for it, won first place. 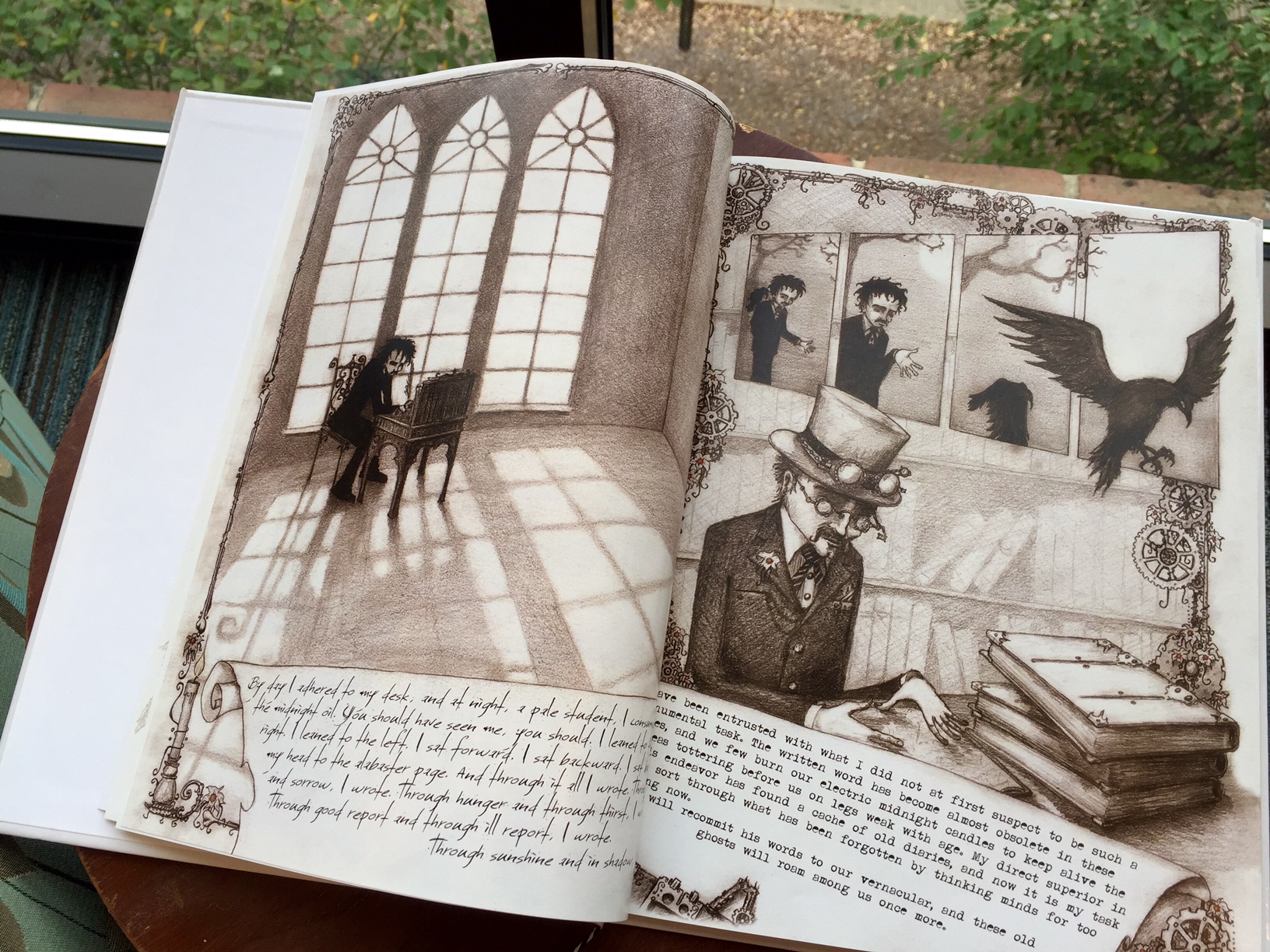 Strangely, no high school students, who are often drawn to the supernatural and darkly romantic aspects of Poe’s writing, are represented in the exhibit.

Works varied from comic interpretations of Poe from Klon Waldrop and Dan Smith to moody and ethereal pieces like Michael Marshall’s “Spirit Woman #9” and Ginger Goekjian’s “The Deaths-Head.”

Geokjian’s photograph of an old oak tree dripping with moss and bathed in reddish-orange light also features a skull hanging from the tree’s branches. The blurry background of the image gives the work a feeling of violent motion and the hanging moss seems to drip from the tree like blood.

While many of the works by fourth and fifth graders featured watercolor, the media varied. Joe Dreher’s “Edgar Allen Jogger 5K,” a stunning portrait of the writer, was created with spray paint, house paint and prints from the soles of joggers running across the paper. 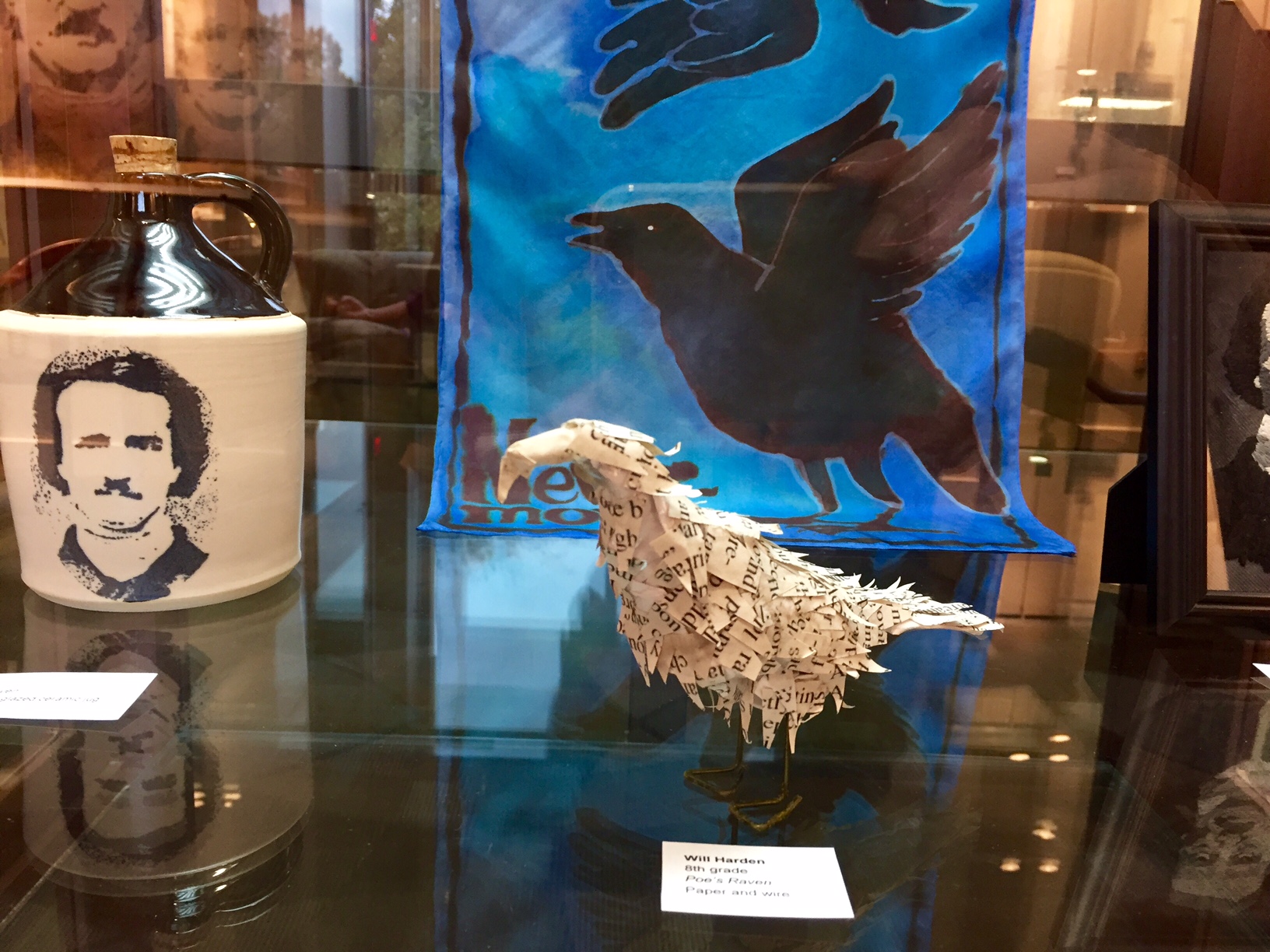 A prize winning “Raven” by eighth grader Will Harden is displayed with work by Thom Fink and Margaret Agner.

Eighth grader Will Harden’s “Raven” is a three-dimensional piece whose delightfully textured feathers are made from printed pages of Poe’s poem. The work is displayed in front of a silk painting by textile artist Margaret Agner inspired by the same poem.

A highlight of the day was a surprise appearance by the author. A Rose of Athens Theatre actor, dressed in a period ruffled shirt and trousers and with a thoughtful and moody expression, swept into the reception, nestled into an armchair and gave a reading of The Raven. 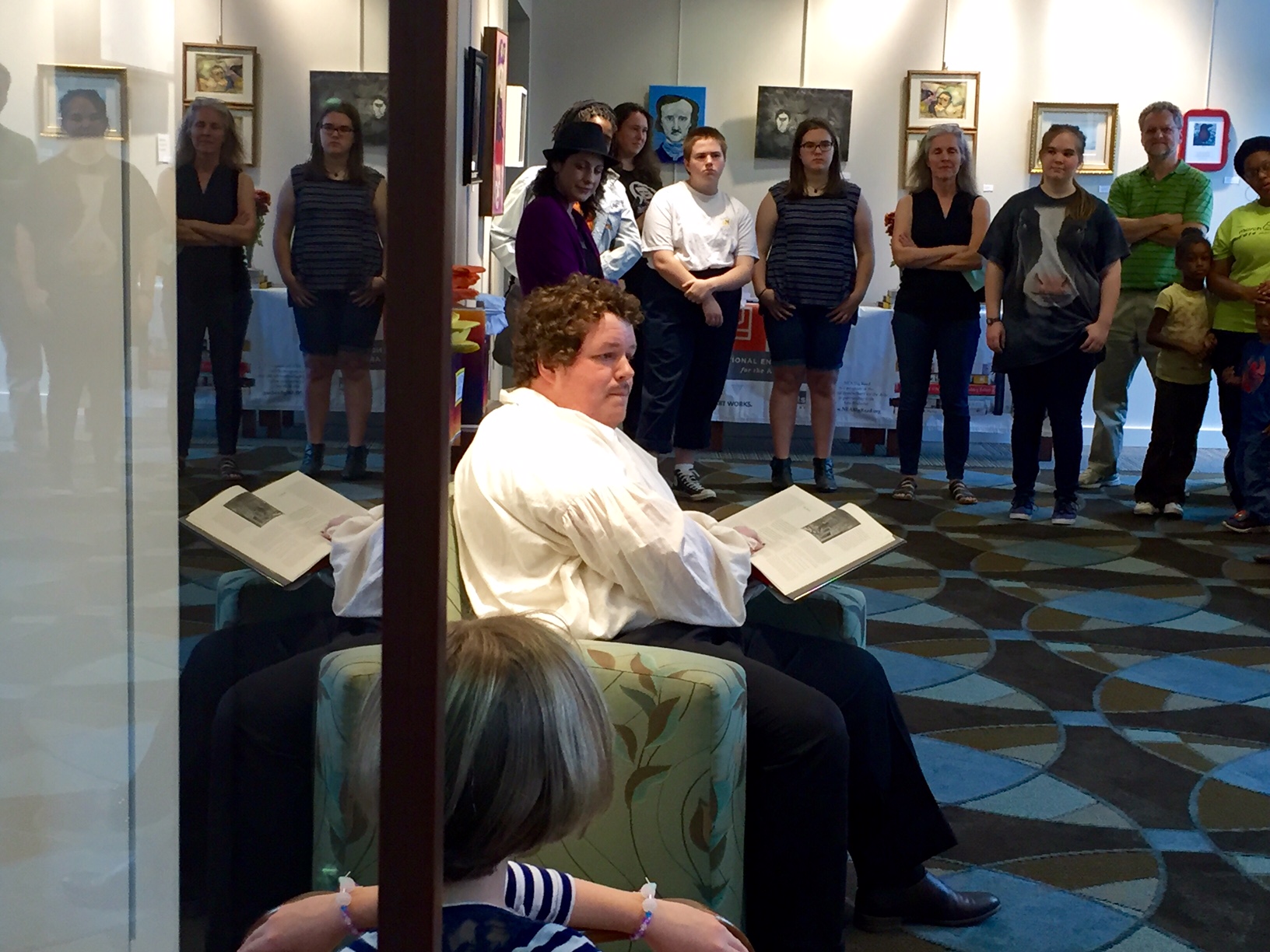 “Poe” gave a reading at the ACC Library.

Books by Edgar Allen Poe were given out to families attending the reception.

The exhibit will be on view at the ACC Library through the end of the month. For more information about the events of Poe-tober, visit coe.uga.edu/poe.

Athens Power Rankings for the Week of Oct. 17

Donna Chang’s and Wok’s Up Are Open, and Other Food News