Susie Burch Shows Her ‘Rocks and Water’ at Heirloom

Susie Burch at the opening for “Rocks and Water” at Heirloom.

“It’s Neverland,” watercolorist and oil painter Susie Burch said emphatically, when asked what drew her to Athens. It is how she and her daughter, Heirloom Café co-owner Jessica Rothacker, describe the magic that seems to keep people creative and fulfilled in this town.

And it did feel magical watching the sunlight stream through the windows of Burch’s Chase Street cottage studio, sparkling and bouncing off of the bright and sincere paintings lining its walls on a recent afternoon. The artist had celebrated the opening of “Rocks and Water” at the restaurant the night before, but was already back at work on a new commission.

Detail from “Inlet Near Schoodic Point” by Susie Burch.

Burch exhibits once a year at Heirloom, which is located just next door to her workspace. Previous shows include a series of succulents, where the artist zoomed in on colors and textures to create modern compositions, and a series of portraits of the farmers that provide the vegetables, fruit and meat served at the farm-to-table establishment.

Burch paints to celebrate the beauty of what she sees and often works out of doors, carefully observing the natural world. Her mountain music series captured the cultural life around the second home she shares with husband Travis Burch in Northeast Georgia (their primary home is an historic loft near downtown Athens). Two paintings from this group of works ended up displayed for several months in the capitol in Atlanta. A photo of Burch with the paintings and Governor Nathan Deal hang on a bulletin board in her studio. 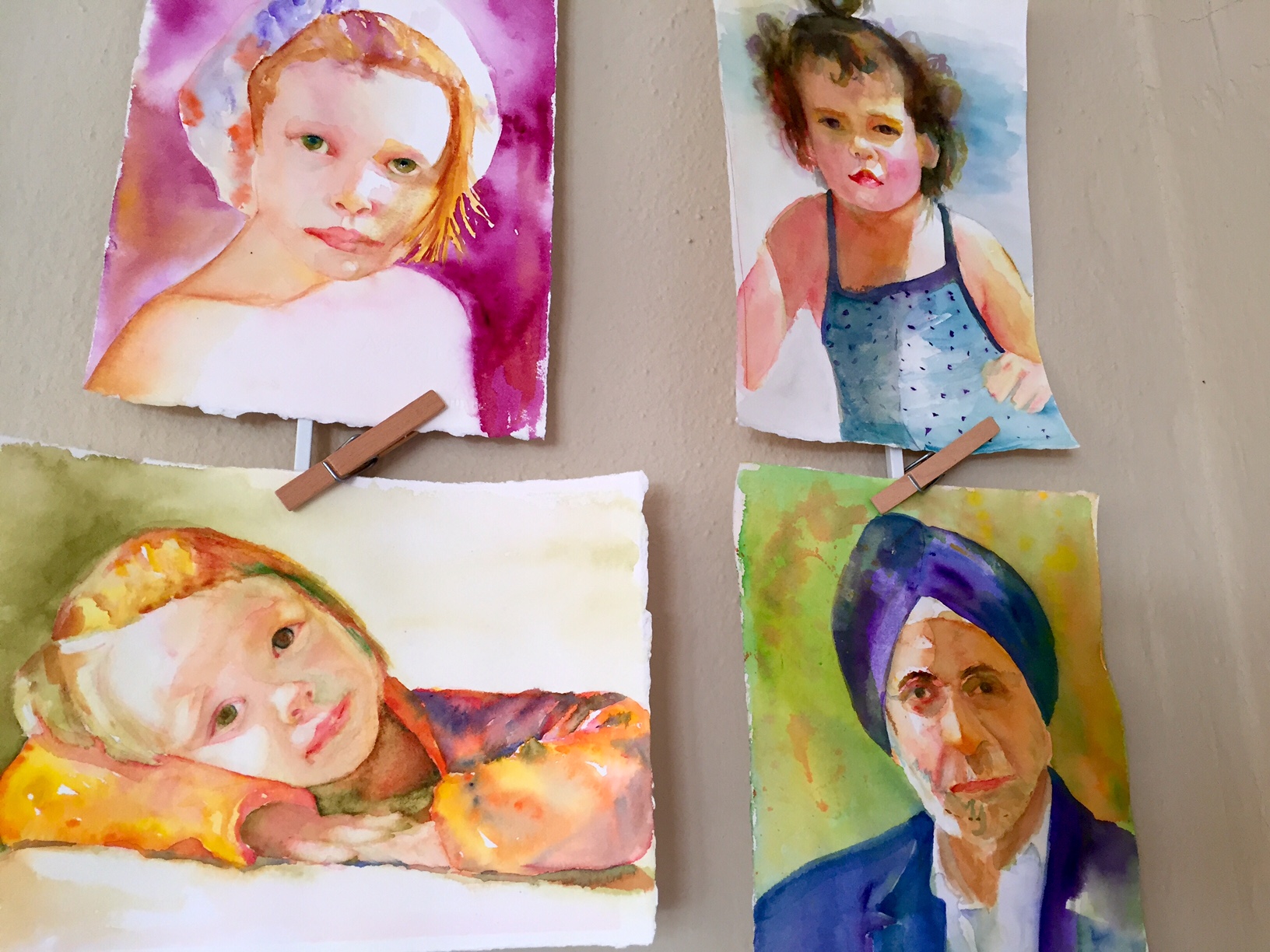 Portrait studies by Susie Burch hang in her studio.

With “Rocks and Water,” Burch delights in exploring natural elements that have fascinated the artist since childhood: large boulders and tiny shards, their cragginess, their smoothness, and wet versus dry surfaces. Burch created most of the series in Maine, while on a retreat at the invitation of Eric Rhoads, editor of PleinAir Magazine. Oil paintings in the group tend to be larger and emphasize abstract compositions created by the juxtaposition of rocks, while watercolors feature a broader view with foliage and land and water masses. The watercolors are waxed, a process Burch now uses to eliminate the need to put the works behind glass.

Burch in her studio; a work from her Georgia Farmers series is in the background.

The subtle, earthy paintings don’t show quite as well in the crowded and festive little restaurant as some exhibits in the past. Get there early for the better light and to beat the crowds if you want to really see and enjoy them—although the people here tend to be friendly and usually don’t seem to mind if you want to lean into their booth for a better view.

“Rocks and Water” will be on view at Heirloom through Monday, Oct. 24. For more information, visit susieburch.com.