One of the first things you notice at the Greater Bethel A.M.E. Church is the deference with which people treat each other. Titles are used and strangers are welcomed.

On a recent Saturday, its congregants opened their doors wide to welcome the larger community as people came from the far reaches of the Athens area to pay their respect to one man: folk artist Harold Rittenberry. Or Mr. Rittenberry, as he is always referred to in the modest but powerful church on Rose Street.

Guests were given a handwritten thank you from the artist before they even entered the sanctuary. 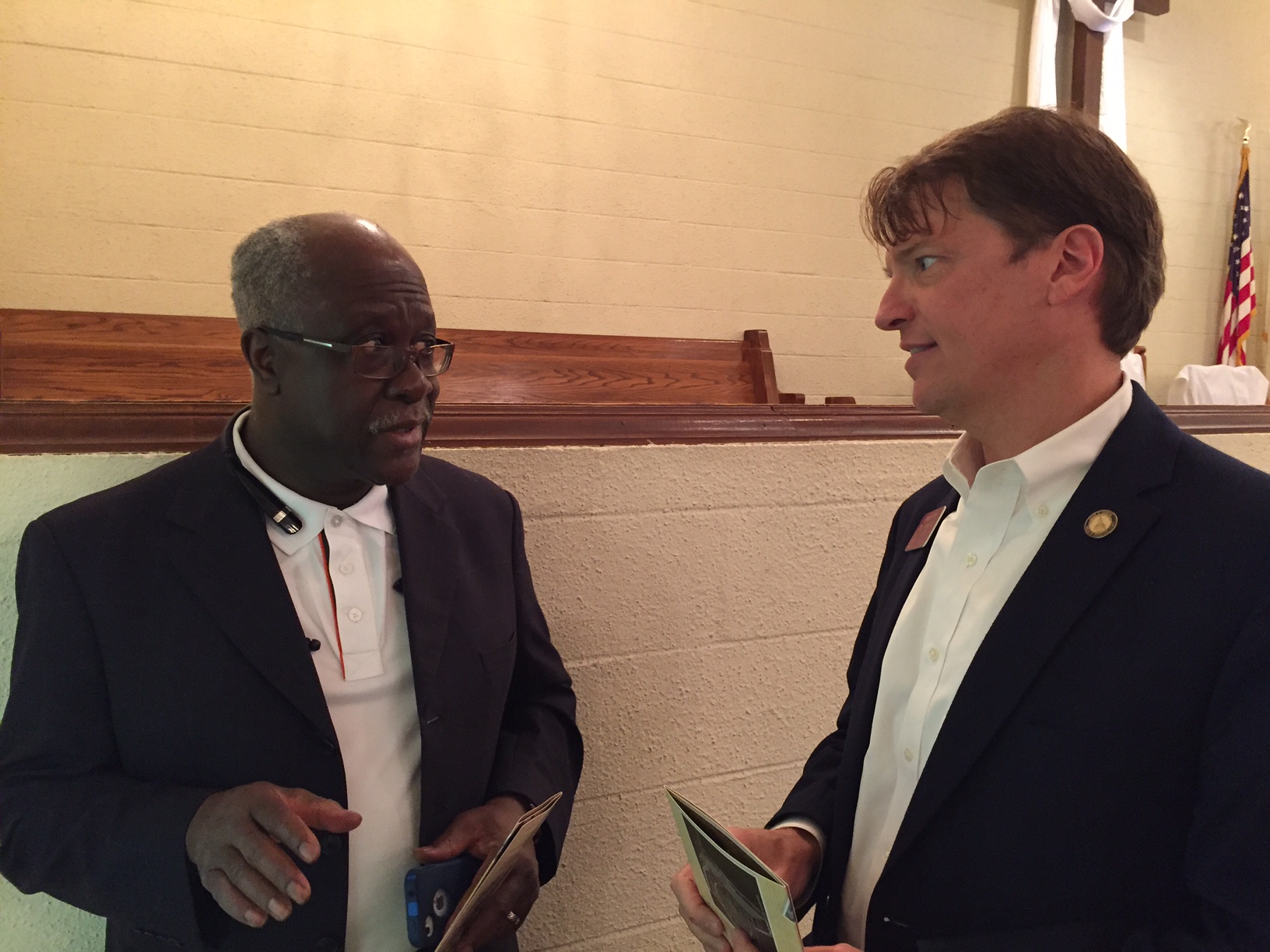 Mrs. Rosa Thurmond, a tiny woman with a big voice, sang “Amazing Grace.” She described the artist as being “humble, loving, caring, giving—all the attributes of a strong African man.” Amens were heard among the attendees.

She went on to say, “When I look at the art and see all the birds in flight… this says something special about Mr. Rittenberry. He’s free, free as a bird.”

Birds are a recurring motif in the folk artist’s work. Rittenberry welds large sculptures out of mostly found and often rusted metal. His yard in a little neighborhood near the library delights many Athenians, who make a point of going by to check out the artist’s “Knight” and to see his latest work. 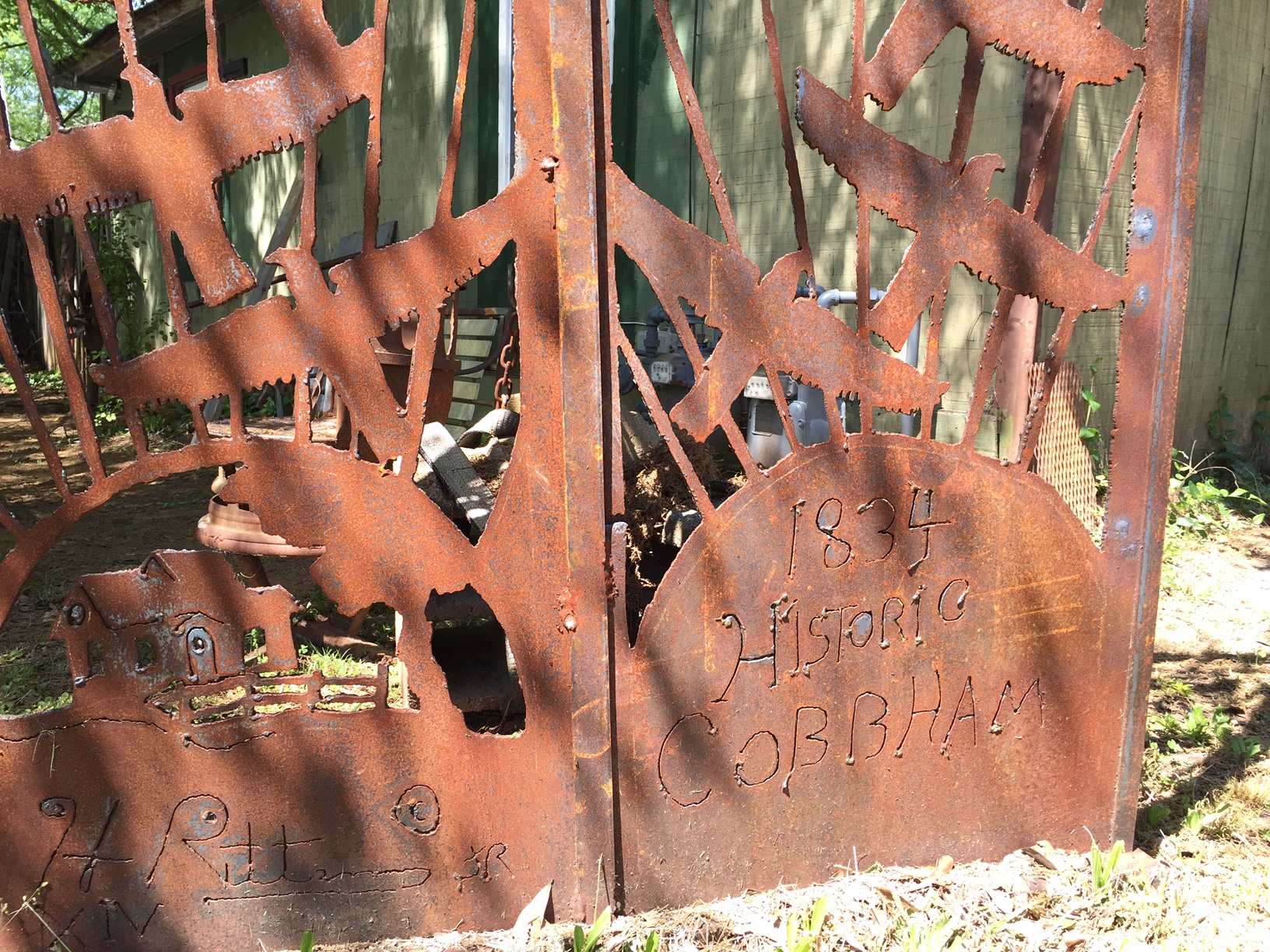 According to Dr. Robert Clements, a retired professor from the Lamar Dodd School of Art, “when Harold would come home from elementary school, he would walk by the home of Dilmus Hall, a wonderful folk artist, and he was in awe of his art.” That may have inspired Rittenberry, but it was not until years later, while taking time off from work to care for his mother who was suffering from Alzheimer’s, that he started making art in earnest.

Clements led a slide presentation as part of the celebration and discussed Rittenberry’s work. About one large-scale sculpture, “Wisdom,” he admiringly said, “He cut it out like you or I spread a butter pat.” 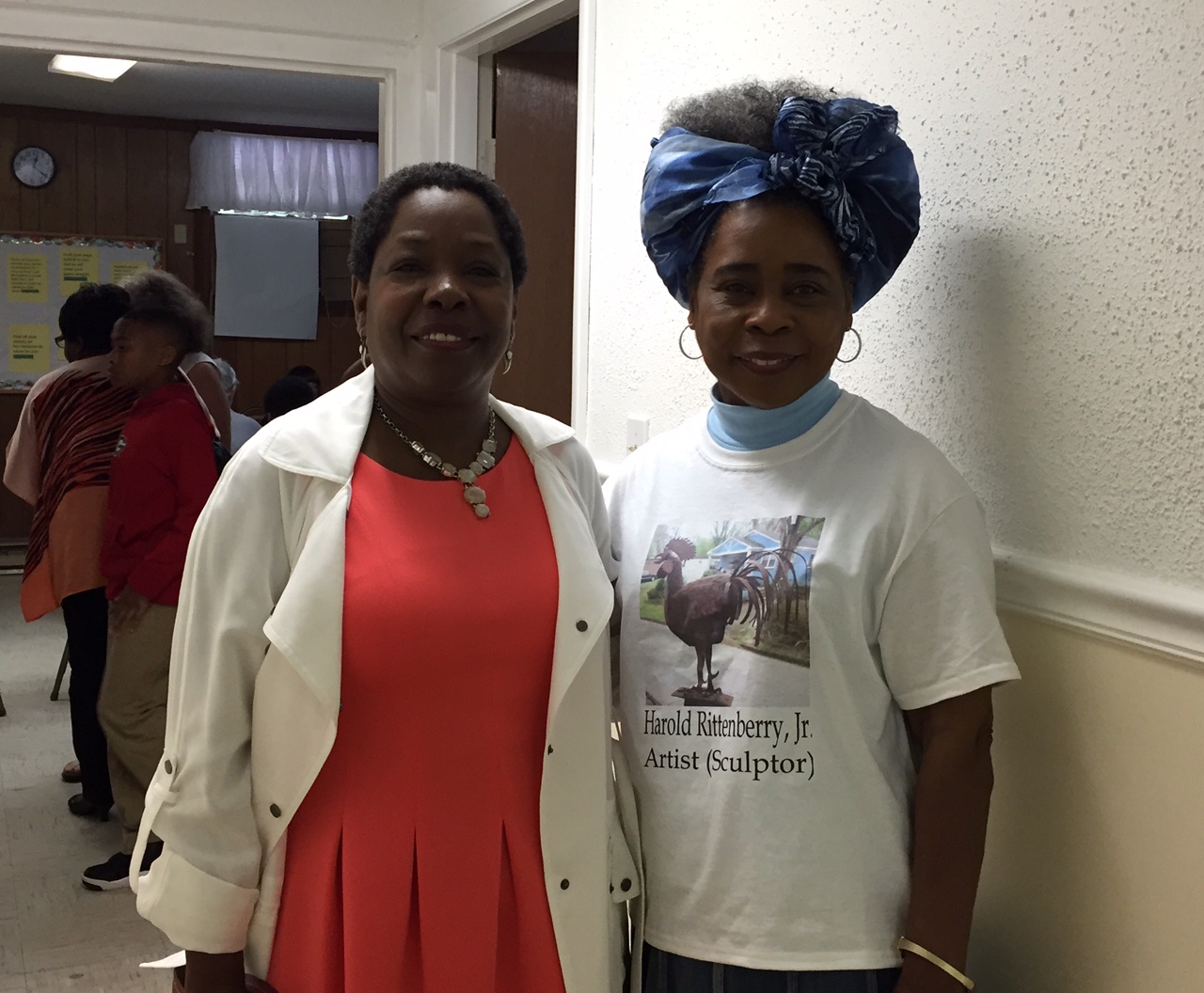 Lee Smith and Tommie Farmer, who helped organize the event.

The friendship between Clements and Rittenberry began 22 years ago with a knock on the artist’s door. Clements had won a contest as part of Atlanta’s efforts to spruce itself up for the ’96 Olympics. His winning vision was to create a folk art park featuring the works of significant Southern artists. Art critics and museum administrators on the committee told him he had to include Rittenberry.

Rittenberry has a number of works in the Folk Art Park. He has also created a large-scale gate for the Atlanta City Court.  In Athens, he has created the Brooklyn Cemetery Gate for an African American cemetery behind Clarke Middle School. In the artist’s yard, a work commissioned for the Cobbham Neighborhood now stands, awaiting installation. His work is featured in the collections of the Georgia Museum of Art and numerous patrons. 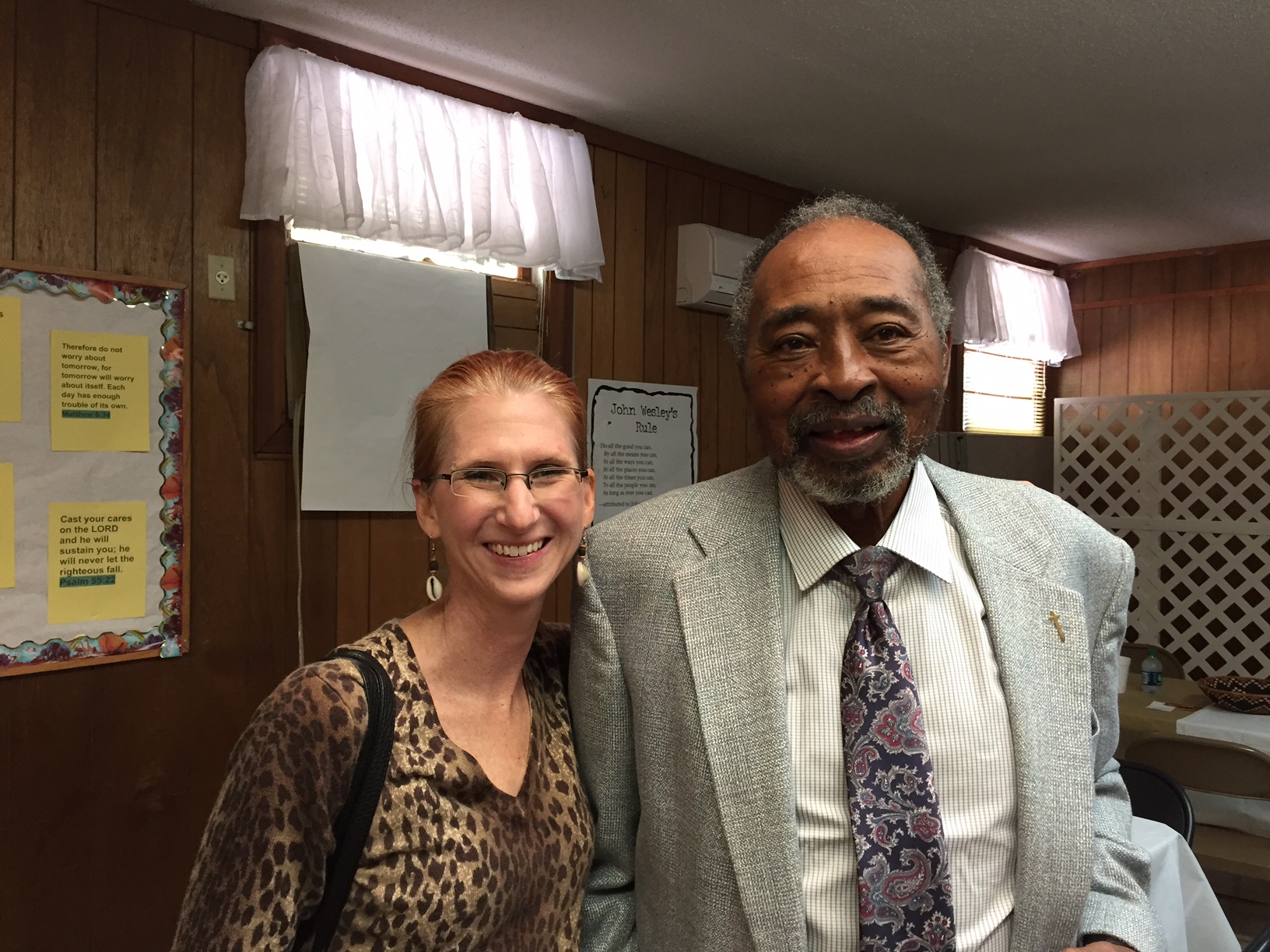 Melissa Link and honoree Harold Rittenberry in the fellowship hall.

Mayor Nancy Denson was on hand at the celebration to honor the artist with a key to the city. Before declaring the second day of April 2016 as Harold B. Rittenberry Jr. Day, she praised him as a “highly recognized folk artist” who “practices good ecology through recycling” and is “a true asset to our community.”

Mr. James Holston presided over the event. He came up with the idea to recognize Rittenberry, a congregant at Greater Bethel A.M.E. who has lived next door to the church his entire life. According to Holston, when he approached Rittenberry about the guest list, the humble artist claimed he was not known and didn’t really know anybody. Before the packed pews, Holston stated “You’re not alone, because you have the city of Athens right here.”

After the celebration, a meal of ham, turkey, salads and homemade cakes was offered. Neighbors, church members, artists, museum administrators, local politicians and Rittenberry’s large extended family shared the meal along with stories and praise. 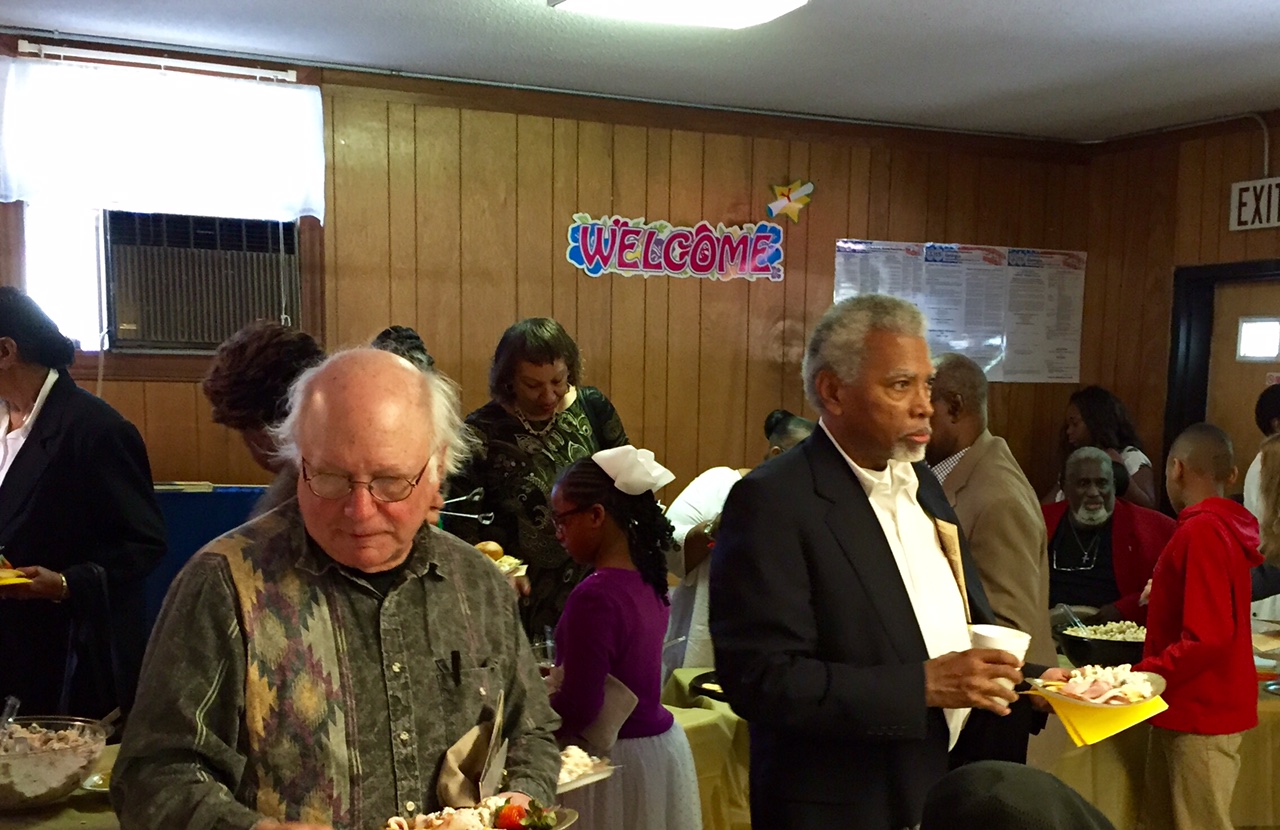 Guests shared a meal after the celebration.

Judy McWillie, professor emeritus of drawing and painting at Lamar Dodd, said “I thought it was just so moving, so lovely to see the importance of art and Mr. Rittenberry in his community.” She went on to say that the event had communicated the idea that “We are here for you—artists need to hear that.”

The Reverend Carlos T. Young addressed Rittenberry directly in his closing remarks that day. “Some are born to greatness, some achieve greatness and some have it thrust upon them. You have achieved greatness.”