Georgia Strange’s “Residue” has the added benefit of an olfactory component. Viewers can experience the work from two feet away with their eyes closed. There is a familiar smell that perhaps you can’t quite put your finger on. The smell of almost used up bars of Dial soap.

From a distance, the work looks like one of those scraps of paper watercolorists create as they mix color samples. The bars of soap, which are nailed in tidy rows to a white board, have a luminous quality and appear to have subtly different values and color saturations.

Unfortunately, I couldn’t track Ms. Strange down to ask her more about her oddly appealing work at this week’s opening reception for “Reciprocal II: OCAF Members at UNG.” But I did get to chat briefly with Ray Lee, the lucky winner of a future solo show that night.

A variety of media is on display. The photographs are particularly appealing. Tommy Warren’s “No Ghosts,” while a haunting image of a wrecked Navy plane, is also a celebration of texture, from dimpled metal and rock strewn earth to cottony, ominous clouds. 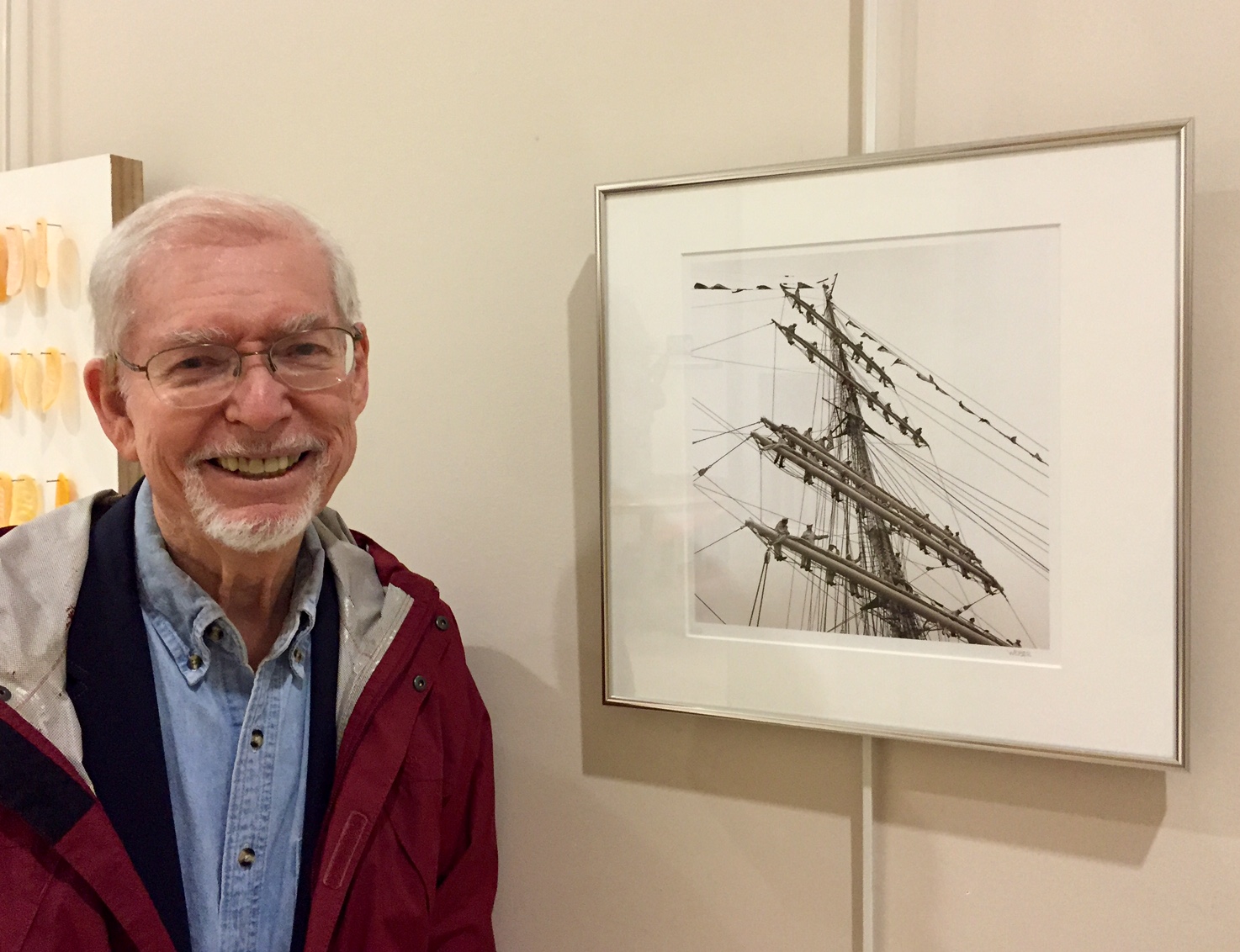 John Weber with his photograph “Aloft”

John Weber’s dynamically composed “Aloft” was taken in 1976 when the tall ships were in Newport. About the cadets perched from a ship’s rigging in the photo, UNG’s Jim Wilson said, “It took me a while when putting up the show to look more carefully and realize they weren’t birds.”

The Reciprocal shows are part of an ongoing exchange between the Oconee Cultural Arts Foundation and the University of North Georgia’s Oconee Campus. For this show, members of OCAF submitted 100 entries from which juror Amanda McClure, Director of the Quinlan Visual Arts Center, selected 19 to include. 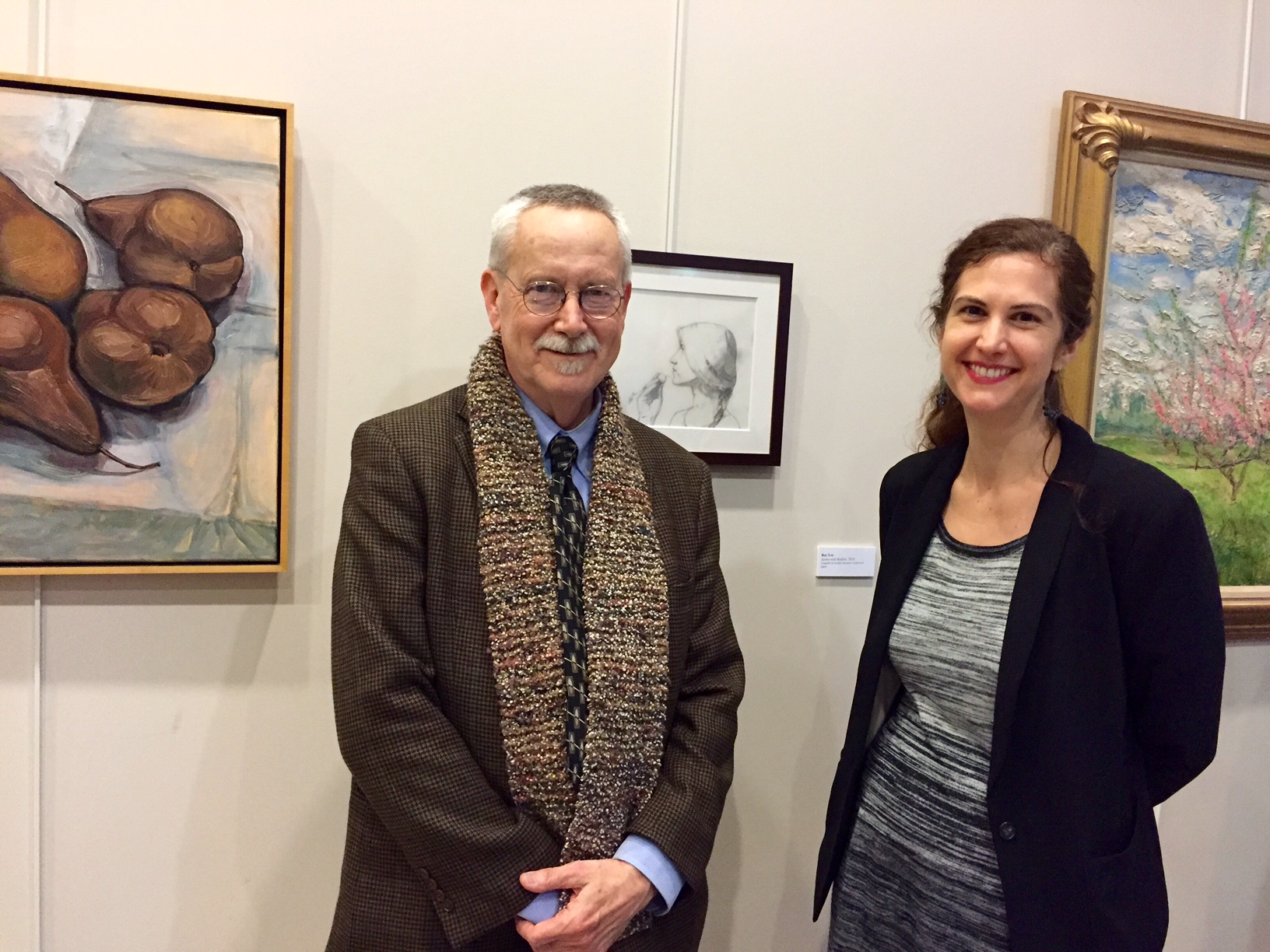 Beth Sale, Director of UNG Art Galleries, said the juror was impressed with the work and described winner Ray Lee’s piece as “astounding.”

It is astounding and yet surprisingly quiet in mood. Lee started off as an undergraduate many years ago in art, but ultimately majored in religion. He has a modesty and poise about him, as does his winning graphite drawing “Jenna with Radish.”

The artist draws and works regularly in watercolor. “Watercolor has helped me to deal with failure on a regular basis. I throw out more than I keep,” he said good-humoredly.

“Jenna’” holds a radish near her face, the root of the vegetable pointing down toward her chin with a graceful flourish. The drawing has a minimal and airy composition, with strong contours and a generous portion of negative space. 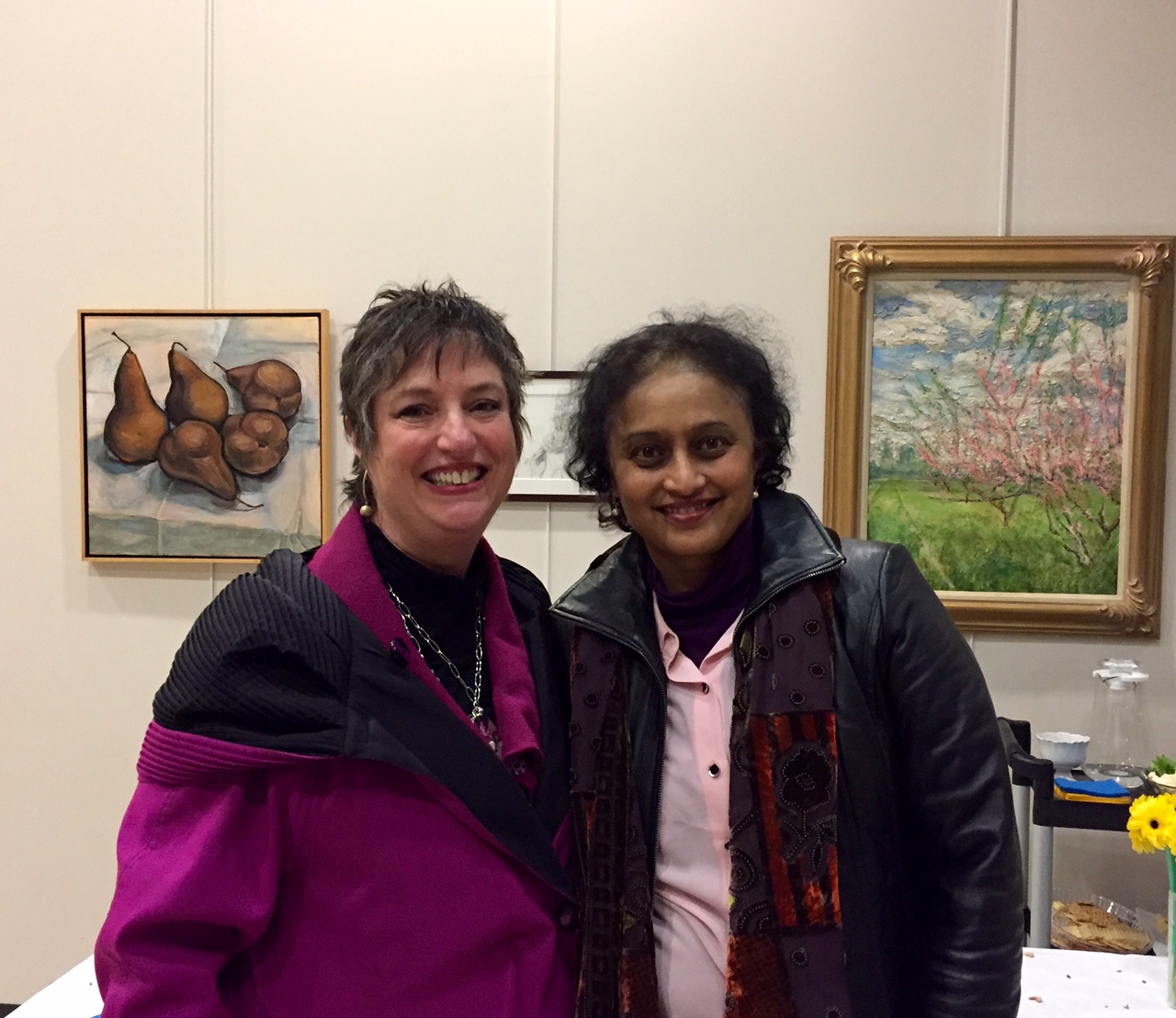 Laura Leiden and Rita Mathew with works by Dianne Penny and Robert Clements in the background.

The drawing was created at one of the weekly open studios held at OCAF, where members draw and paint from a live model. “Bob Clements loves to bring props,” Lee said. The drawing was created on a night when he brought some vegetables and wanted the model to hold the radish. Lee said, “It actually worked out well.”

It worked out very well for Lee, who as the show winner, will have a solo show at the UNG Oconee Campus later this year.

Reciprocal II: OCAF Members at UNG will be on view at UNG’s Oconee Campus through Thursday, Mar. 31. for more information, go to ung.edu/art-galleries.