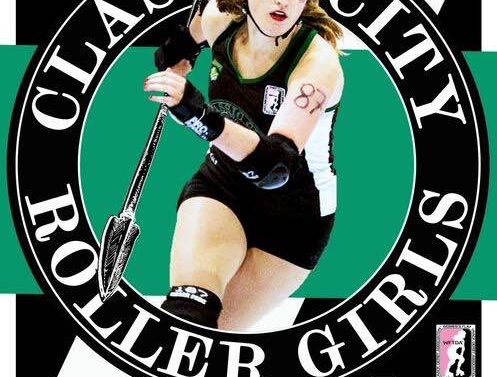 At 6 p.m. on Wednesday, Fun Galaxy, the vintage (antique?) skating rink on Cherokee Road, offered no relief from the heat and humidity outside. The swampy space may have an AC, but from the feel of things inside, the Classic City Rollergirls were not allowed to touch the thermostat.

More than 30 skaters gathered here to endure the elements, gear up and run drills during the final practice before the team’s most important bout of the season. Ms. Pac-Man was unplugged. The snack bar was closed. After 30 minutes, a light sweat sheen became a steady pour, changing the color of this completely inactive reporter’s shirt from blue to dark blue.

Team captain Louis Strongarm barked instructions at her teammates as someone snuck into the DJ booth to broadcast a mostly metal playlist. If you closed your eyes and just breathed in, you were immediately transported to a middle school locker room. That smell? Dedication.

In the third and final hour of practice, the skaters splintered into two groups. While the less experienced newbies wove around neon traffic cones and worked on basic derby fundamentals, the veterans prepared to scrimmage each other. The presence of a handful of knowledgeable officials with whistles gave the simulated game play experience a palpable level of authenticity. With 10 athletes constantly in motion and contact, simultaneously playing offense and defense, feedback from refs during practice is incredibly valuable. If you aren’t practicing within the rules, it stands to reason you will play outside the rules when the games count—and a skater in the penalty box can’t help her team.

Most of the girls hitting each other in last night’s practice will be on the roster Saturday as the 144th-ranked CCRG, fresh off a June 20 victory in Savannah, duels with the 118th-ranked Cape Fear Roller Girls, the highest ranked opponent on this season’s schedule. Attempting to block a nimble monolith like Super Smash Fro, or match the open-space speed of a jammer like Phat Amy only to turn the corner and find a chippy Elizabeth Impaler ready to face-off, is all great preparation that will hopefully pay dividends for CCRG on the track Saturday night at the Classic Center.

The Classic City Rollergirls face off against the Cape Fear Roller Girls Saturday, July 25. The bout follows a match-up between the Atlanta Men’s Roller Derby and the Collision Men’s Derby. Tickets for both bouts are available at the Classic Center box office.

Athens Power Rankings for the Week of July 20