‘The Finders’ Assembled a Unique Show at Hotel Indigo

Didi Dunphy with the UGA students who designed a mobile application that helps viewers engage with the artists and their work.

“My favorite animal is the raven,” Amanda Scheutzow replied to a question about her work Thursday night at the opening for “The Finders” at the Gallery @ Hotel Indigo. To some, “the raven is viewed as a creator.” The young, Paintbox yellow-haired artist was leading a jewelry class, which she assists instructor Sylvia Dawe with at the Lyndon House, through the exhibit. The MFA candidate spoke enthusiastically about the materials and the symbolism within her work. Her pieces feature silhouettes of ravens, roots and branches that are constructed of copper, brass and silver; typically, they surround and nestle found Victorian-era photos.

“Finding” is the common denominator among the six artists featured in the show: Scheutzow, Charlie Asher Key, Garrett Hayes, Lisa Freeman, Chris Novey and Taylor Kuzia. They seek and find, or are sometimes given, many of the objects that they incorporate into their mixed media works. And “finding” is what curator Didi Dunphy did in assembling this unique display; she discovered many of the artists after seeing their work in shows around town.

Amanda Scheutzow with her work “Memories Decay”; about the pins in it, she said, “I’m a very big fan of shadows.”

In addition to the tendency to seek things out, the artists also share the habits of squirreling things away in their studios and sorting them obsessively. Dunphy visited the studios of the artists when putting the show together and was struck by their commonalities. “The practice is very similar,” she said about methods of organization among the group.

Many of the artists are drawn to things from the past. Garrett Hayes utilizes items left to him by his grandfather, a farmer who was something of a hoarder. Scheutzow loves old tin types because “potentially, it could be the last photo taken of that person.” Lisa Freeman’s works are the most like Joseph Cornell, the godfather of assemblage; she fills shadow boxes with nostalgic photos and vintage detritus in “Jesus Pencil” and other dreamlike works. 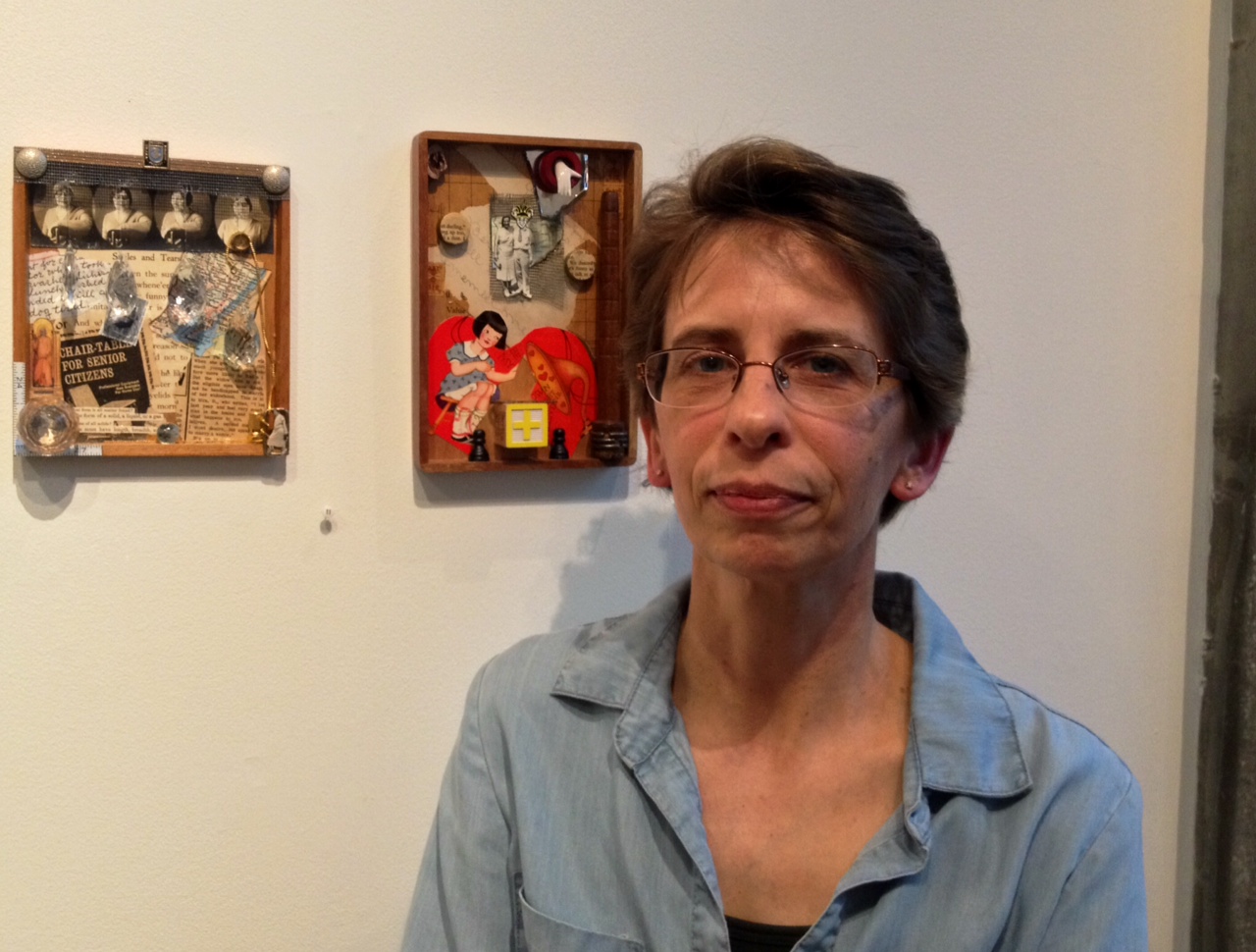 Lisa Freeman with two of her works in “The Finders”

Recent UGA graduate Taylor Kuzia looked no further than her studio floor to find materials for her works in the show, gathering leftover bits from her printmaking to create minimalist collages.

In marked contrast to the nostalgic feel of much of the art was the technological collaboration between Dunphy and four New Media Institute students at UGA. Adriana Bocker, Brad Gerke, Sara Jungles and Ann Stimson designed a mobile application to help viewers engage with “The Finders.” They have archived some previous exhibits as well. The students have also incorporated a fun feature where you can build your own artwork with a selection of images onscreen. 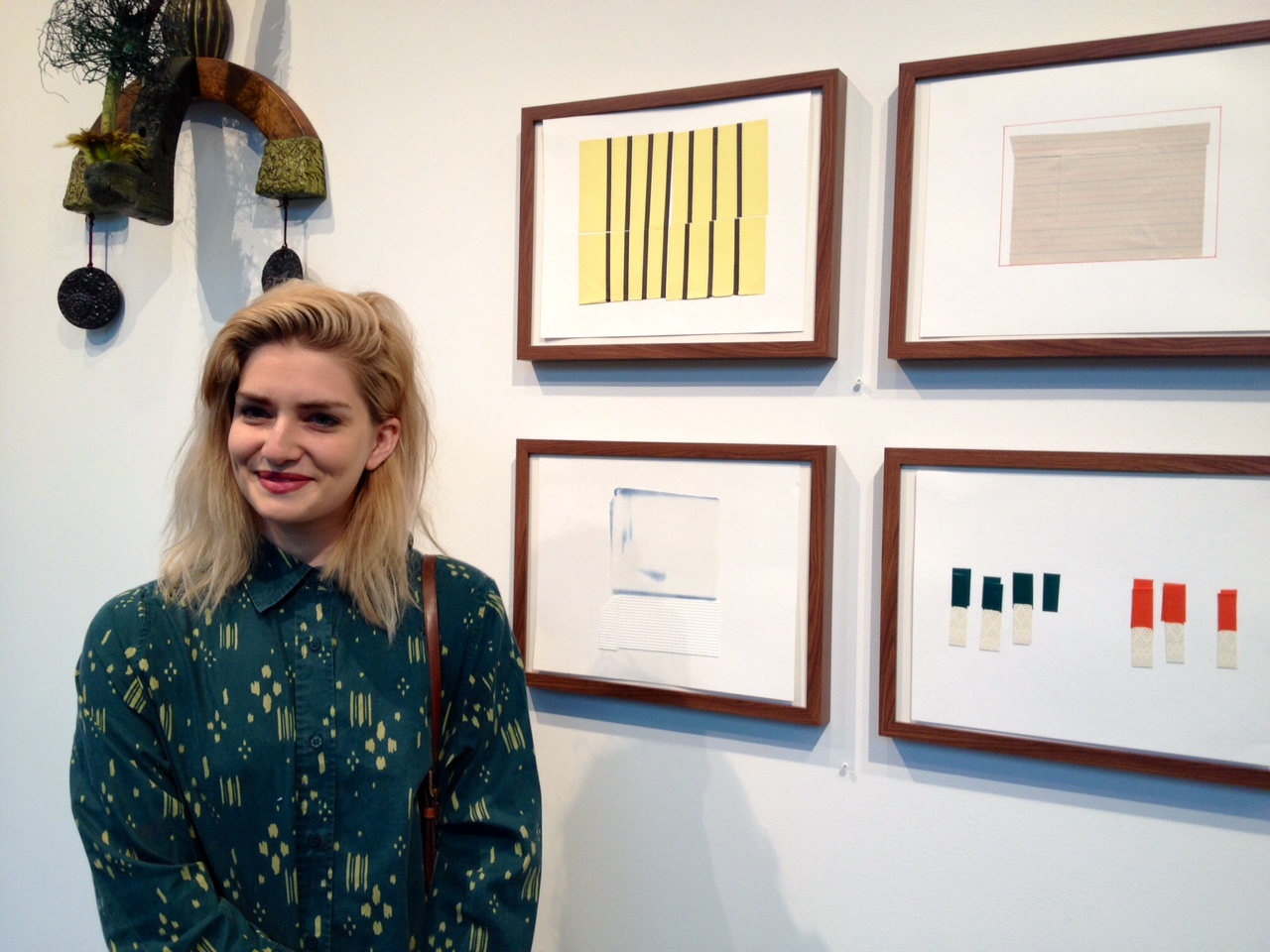 Taylor Kuzia with some of her collages. Work by Garrett Hayes can be seen behind her.

I would still like to see the artist and title by the work, not multiple numbers (one for the paper guide and one for the app). Juggling a piece of paper and a phone and a glass of wine might be too much for some. But I think enhancing the gallery experience by connecting viewers to the artists with a smartphone is a smashing idea, and I am not surprised that Dunphy is exploring this.

“The Finders” will be up at the Gallery@Hotel Indigo through Tuesday, June 30. “Bang,” an installation by Carol John, is also on view outdoors in the Glass Cube. For more information, go to indigoathens.com.

Athens Power Rankings for the Week of Apr. 20