Work By Latino Artists Shines at the Meyers Gallery

The members of Contrapunto create work that is very different from each other while sharing a common goal: to show and promote the talent of Latino artists living and working in Georgia. Their latest project is a group exhibit that opened at the Meyers Gallery at Athens Academy on Sunday. Their diverse talents boldly shine in this extraordinary yet lesser-known gallery space designed by Peter Norris.

Carlos Solis, the founder of the group, was on hand for the opening and eagerly shared their story. After moving from Chicago to Kennesaw, he was surprised and disappointed by the lack of Latino art in the Atlanta area. Searching online, he discovered the work of Stanley Bermúdez on a website for Venezuelans and contacted him. It turned out they were both originally from the same city in Venezuela. After inviting each other to participate in shows they were involved in, Contrapunto was formed. 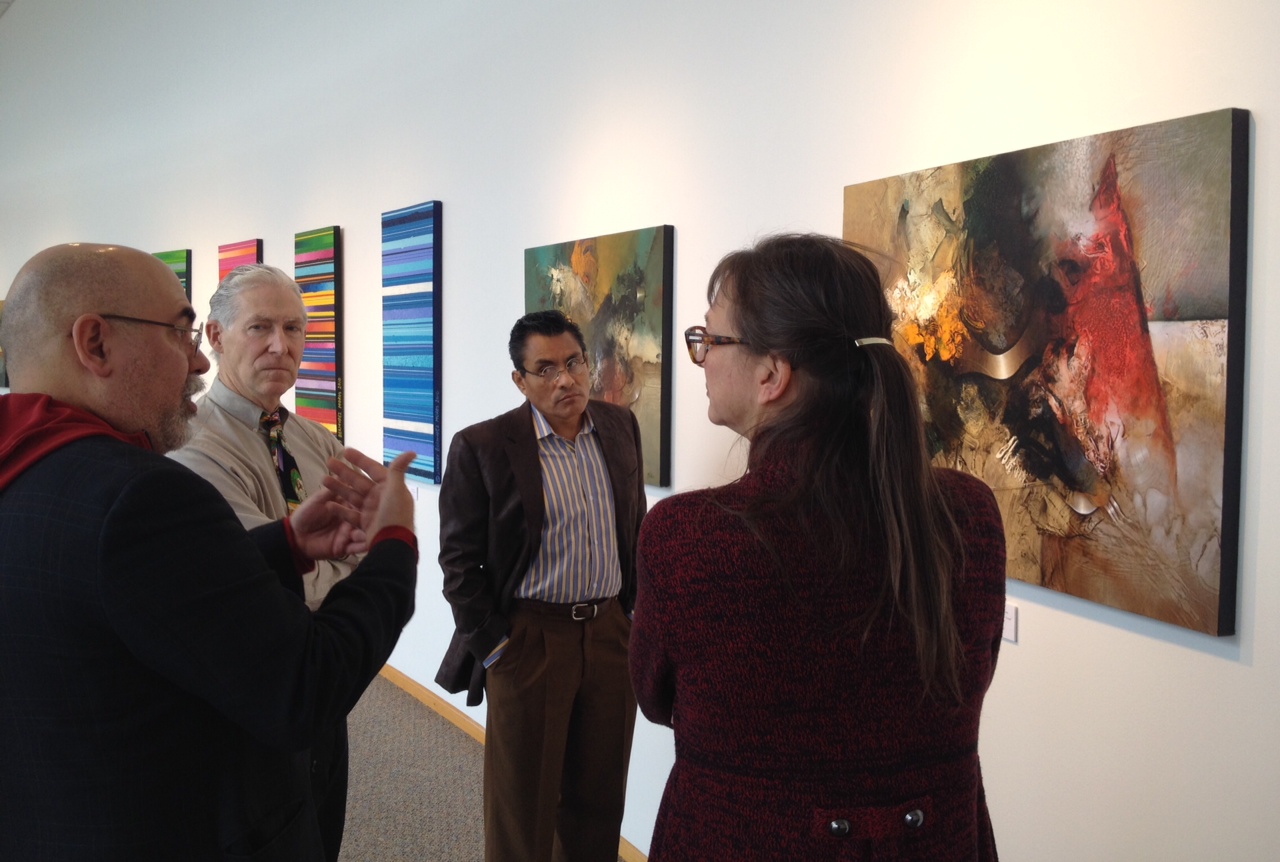 Bermúdez came up with the name for the group, inspired by a band his father listened to when the artist was a child. The vocal group featured male and female vocalists whose voices contrasted but also blended beautifully. It seemed to mimic the nature of the artists as a group. “In musical counterpoint, melodies complement each other but are very different. We are five different artists who work well together,” he says.

A good example of this is the work of artists Pedro Fuertes and Dora Lopez. Fuertes and Lopez, who are husband and wife, both paint abstract compositions. Many of the works by both artists feature a rich, earthy color palette and a sense of dynamic energy. Lopez’s pieces have a feminine and organic quality, however, while Fuertes’ seem more aggressive and masculine and appear to sometimes allude to machinery elements. 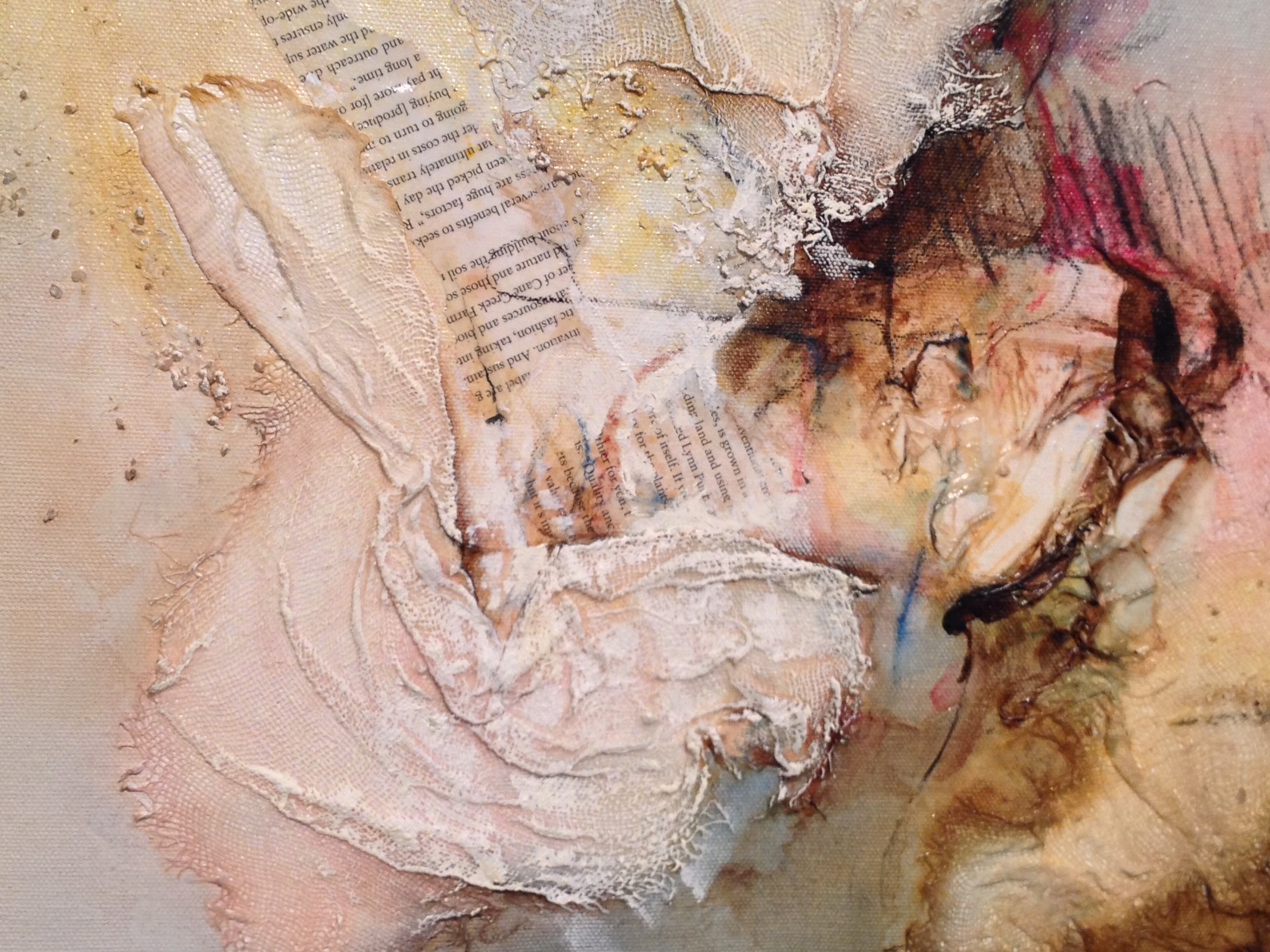 Detail of “Orchid” by Dora Lopez

The paintings of both emphasize texture. But in the work of Fuertes, the texture is implied and the surfaces are actually smooth. Lopez incorporates cheesecloth and paper to build up her canvas. At the opening, Athens Academy instructor Leigh Ellis said she was looking forward to showing her students all of the work, noting that Fuertes’ pieces would be helpful in showing them how to make something appear shiny through the use of contrast.

Solis’ paintings are based on strange dreams he has had since he was a child. “I’m a graphic designer, but my passion is this,” he says, gesturing to his work on the walls. He started taking art classes specifically to develop the skills to portray his dreams and nightmares. “I sleep with a sketch book by my bed.”

In addition to work by Contrapunto members Solis, Bermúdez, Lopez, Fuertes and Jorge Arcos, paintings by guest artists Alexis Mendoza and Claudia Soria are also on display. The show will be up through Friday, Apr. 24. The gallery is open Monday through Friday from 8 a.m. until 4 p.m. For more information, call 706-549-9225. 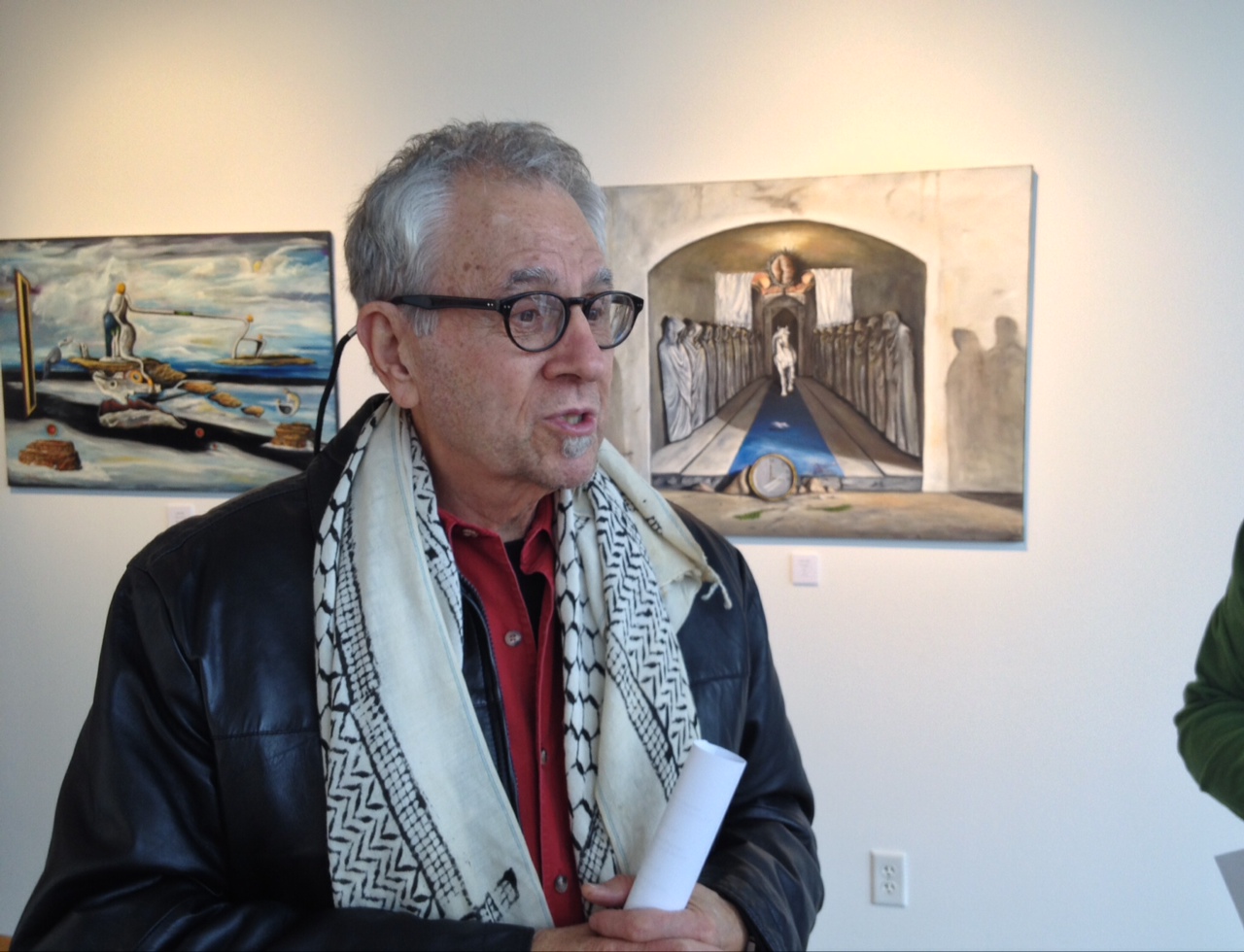 John English at the opening; the work of Carlos Solis is behind him.

Is the Daniells Bridge Road Project About Safety or Development?