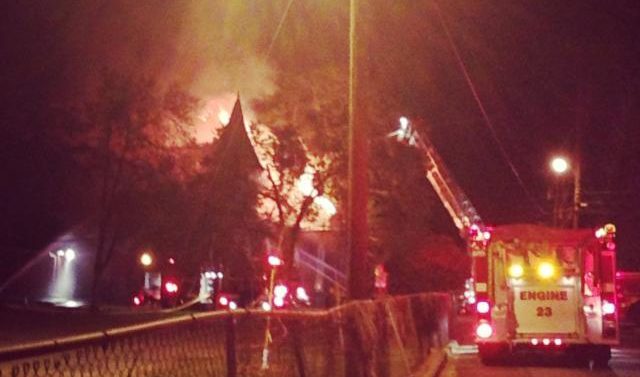 Claire Clements with her work ,”The Empress”

Thankfully, the Knight of Cups landed on the table as Sarah Pattison did a tarot reading for me at the recent opening for “Athens Arcana: A Contemporary Tarot” at ATHICA. The knight and a glass of wine made it a little more palatable when death showed up a couple of cards later. “Oh, that can just mean the end of a life cycle or a relationship,” Pattison cooed reassuringly. She was one of three “mystics” at the event offering divine futures.

The large crowd was exuberant, and the show inspired much conversation. 78 local artists were invited to interpret one card each from a traditional tarot deck in the medium of their choice. The results, though uneven, offer an interesting picture of the styles and approaches to problem solving by these regional artists.

Terry Rowlett’s monochromatic “Death” shows a skeleton in modern combat gear surrounded by dismembered heads and appendages. Tattoo-like roses float in the background, and modern fighter planes hover menacingly. Around the corner, Missy Kulik’s sweetly hued watercolor and ink “Temperance” features a slender antlered girl with a bird perched on her horns. She pours a cup of (presumably green) tea as a bunny and a goose look on. In both, the style of the drawings assuredly reflects the themes of the work. Rowlett’s piece mimics the traditional layout of a tarot card, but utilizes harshly contemporary imagery. Kulik’s card could stand on its own as an illustration.

Artist Claire Clements said she was unfamiliar with the tarot deck and had to research it before beginning work on “The Empress.”  Rather than adhere to a traditional format, her collage is a sensual composition that utilizes transparent layers and graceful imagery that pushes into its borders. A crown of silver Mylar stars and motifs from nature tell us that this is the Empress.

Other artists featured in the exhibit include Manda McKay, John English and Lauren Gregg. James Wenzka’s  “Nine of Swords” was proclaimed “phenomenal” by one viewer.  Dan Smith’s humorous “Two of Swords” could be described as Day of the Dead meets Cartoon Network. Most works are available for purchase. 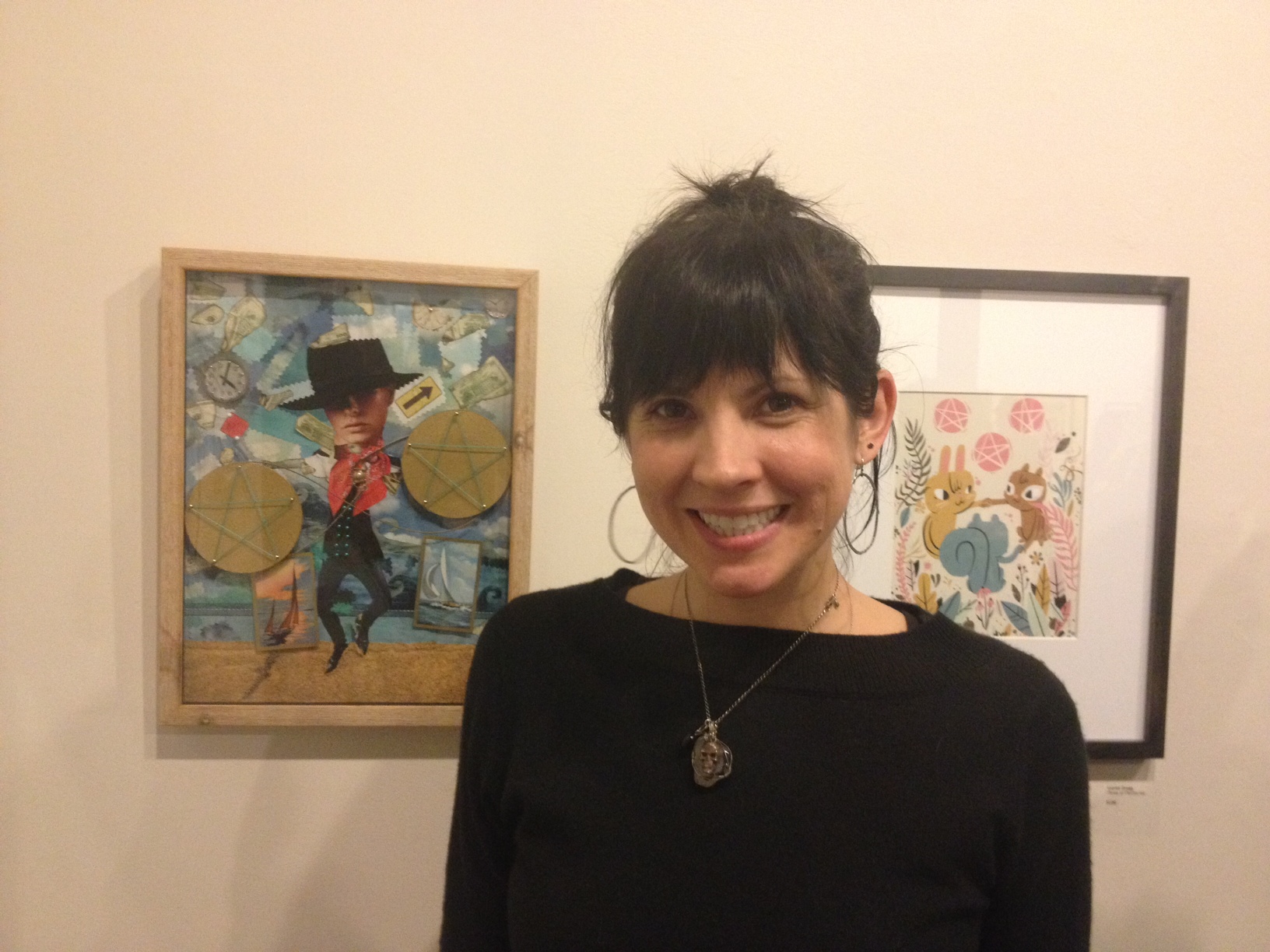 Brittny Teree Smith and her collage “Two of Pentacles”

ATHICA director Tatiana Veneruso came up with the idea of the tarot deck after the success of last year’s ATHICARDS playing card deck and exhibit. “I thought we’d do it again but switch it up a little and do the tarot. With 78 cards, there’s a lot of variety in the interpretations from the very literal to the more conceptual. As a non-profit organization, our annual fundraisers are so important!”

Veneruso was disappointed that the cards hadn’t arrived in time for the opening due to a shipping delay.  The cards will be available for purchase on Thursday, Dec. 18. They can also be ordered at athica.org/shop. The cost is $30 a pack, and all proceeds support the space’s exhibitions and educational programs.

Athens Arcana is only up through Sunday, Dec. 21, so make plans to attend soon. For more information, go to athica.org. 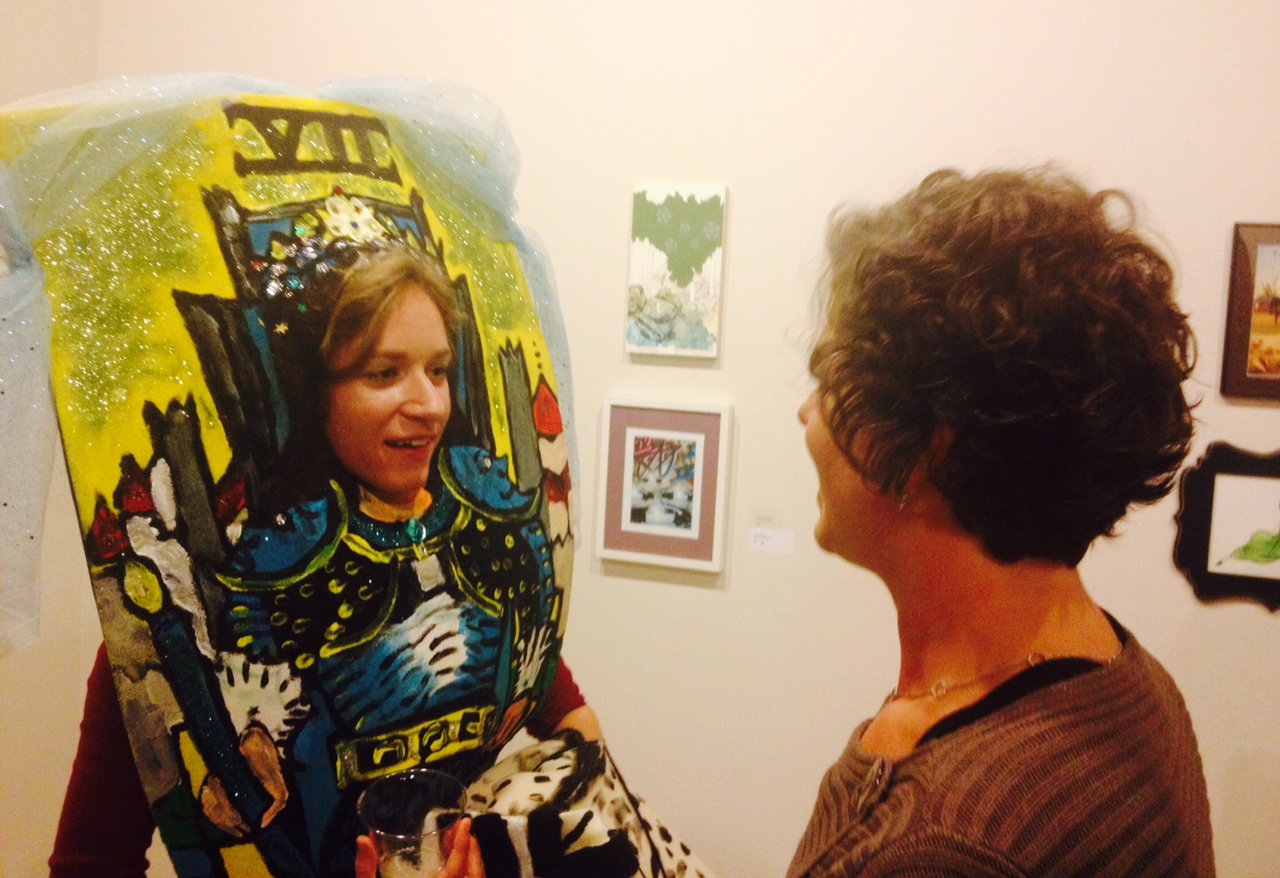