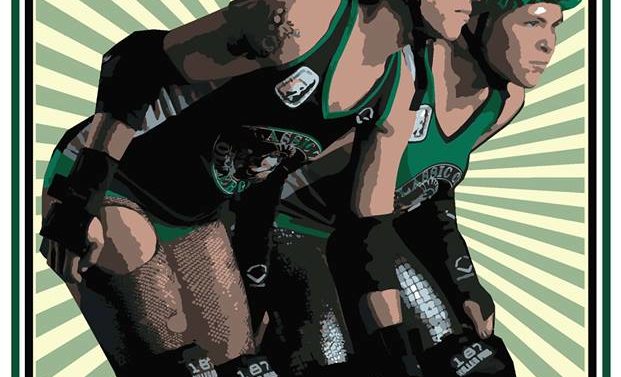 The 2014 season is officially in full swing for our hometown Classic City Rollergirls. Since we last checked in with the ladies in green and black, they’ve played three exciting bouts far away from the friendly confines of the Classic Center.

CCRG’s road trip began May 3 at the Columbia County Exhibition Center just outside of Augusta, where they participated in the six-team Low Down Throw Down tournament. The team had the unenviable task of getting fired up for a 10 a.m. bout against the hostess Soul City Sirens. Maybe they should schedule all their bouts just after breakfast. CCRG, led by the MVP-jamming of Louis Strongarm and an impressive performance from newcomer Phat Amy, dispatched of Augusta 170-116, in an amazing, come-from-behind victory. The team trailed by as many as 38 points early in the bout but refused to quit.

Unfortunately the ladies tasted not only the thrill of victory but also the agony of defeat in Augusta. Birmingham-based Tragic City Rollers, led by stand-out jammer (and maybe total psycho) Mad Villain along with some bulldozing, lane-opening blocking from Eiffel Power, defeated Classic City 96-75 in a grinding, defensive battle. Being the second half of a double-header, fatigue was obviously a factor for both teams.

May 17 found CCRG heading down Highway 316 to face Atlanta’s C-Team, the Jukes of Hazzard, in the hostile Yaarab Shrine Center on East Ponce de Leon Avenue. After taking a nice lead into halftime, the wheels came off for CCRG and the heavily favored Atlanta squad, benefiting from one too many power jams, prevailed 189-134.

This Saturday, May 31, Classic City squares off against the very same Jukes—this time at the Classic Center.

So, will revenge be on the skater’s minds?  “Not revenge, as [much as] domination,” says blocker-jammer-pivot Lolli MaeHamm.

Saturday’s bout will benefit The Tyanna Foundation’s BreastFest, the annual local breast cancer prevention and services fundraiser founded in 1999. The doubleheader begins when our B-team, The Bad News B’s, take on the Savannah-based Hostess City Hellions at 6 p.m., followed by the rematch we’ve all been waiting for: Atlanta’s Jukes of Hazzard versus our Classic City Rollergirls at 8:30 p.m.

Tickets are $12 for a single bout, or $20 for both. Visit ClassicCenter.com to purchase.