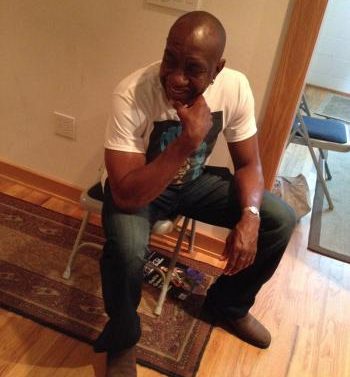 Otis Redding III, guitarist, vocalist and son of Otis Redding (who, you music trivia aficionados might like to know, was technically Otis Redding, Jr.), stopped by Athens last week to lay down a track at Studio 1093. The recording studio is located in the Boulevard neighborhood and is owned by Jim Hawkins, a close friend of Redding and his family. Hawkins performed with Redding’s father some in the 60s and was in the process of opening a studio with him (and Phil Walden, who later founded Capricorn Records) at the time of Otis Redding’s untimely death in a plane crash in 1967.

The track, an original song entitled Leaving Me, features Redding on buttery smooth lead vocals and guitar, as well as local musicians Patrick Reeves on drums, Drew Hart on bass, Kara Waters on backing vocals, Brock Shanks on guitar, and Randall Bramblett on saxophone. The song is being engineered by 1093’s Micah Bennett. Redding will be working off and on at 1093 on a series of recording sessions.

After wrapping up the recording, Redding flew off to Baden-Baden, Germany. He will be making a number of appearances there and in Cornwall, England on television and in concert to promote the life and legacy of Otis Redding.

Redding is dedicated to his work with the Otis Redding Foundation and will be preparing for The Big “O” Singer/Songwriter Camp when he returns to the States. The camp, for 13–17-year-olds with a strong interest in music, takes place annually in Macon in June. The camp helps to promote the mission of the foundation—to empower, enrich and motivate all young people through programs involving music, writing and instrumentation.

Bill Cosby Is Coming to Athens