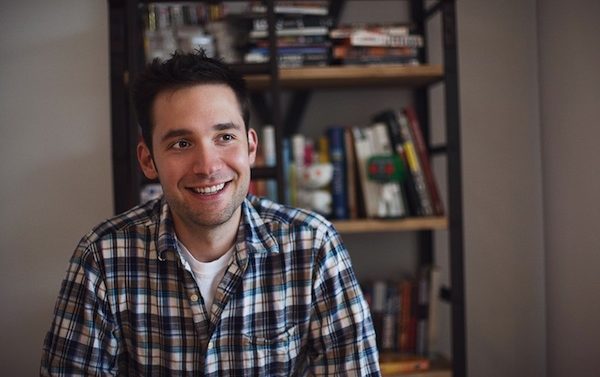 The world isn’t flat, but the Internet is making it more of a possibility.

That’s what Alexis Ohanian taught the 350 students and Athens residents gathered in Tate Grand Hall for his University of Georgia stop on the tour promoting his book, Without Their Permission. Thinc. at UGA teamed up with University Union, the Department of Computer Science and FourAthens to bring Ohanian to campus.

Ohanian’s speech was, as promised, far from a typical book tour and instead centered on entrepreneurship, mascots and memes.

“They merely adopted the Internet. We were born in it,” Ohanian said in his best Bane impression.

His adventure with reddit involved negative karma points, realizing a competitor (digg.com) existed after launching and being laughed at in a meeting with Yahoo. At its founding in June 2005, reddit had two users. It now boasts over two million users, but that doesn’t mean Ohanian has everything together.

“I still don’t know what I’m doing most of the time,” Ohanian said. “Anyone who comes and fronts to you like they know what they’re doing is either lying or delusional.”

Even though he emphasized the importance of coding and being able to build through the Internet, Ohanian brought in other web-based entrepreneurs from Georgia to discuss their projects.

UGA student Antoinette Stevens was called on stage after raising her hand, admitting she was involved in something great. She discussed Tech Talent South, an Atlanta-based program she interns with, teaching kids to code.

“The people who change the world and do something they’re proud of are the ones who put their hand up,” Ohanian said after Stevens left the stage.

Maya Penn, founder of Maya’s Ideas, was also in the audience. She didn’t know Ohanian was going to talk about her, but Ohanian spoke on 13-year-old’s environmentally sustainable clothing business.

“Here she is, this wunderkindt, living in Atlanta who is—she didn’t know she was going to be in the presentation, by the way—and so she’s been living this since she was 8,” Ohanian told Flagpole after his speech. “She’s been living this book [Without Their Permission] since she was 8 years old when she started that first website and store, and she’s just been a force ever since.”

Brandon Stanton, founder of the blog Humans of New York and UGA alumnus, was also Skyped in to talk about his journey from failing classes at UGA to over one million collective followers on Twitter and Facebook.

“I use Brandon as an example in every single one of my talks because it is just such an awesome story,” Ohanian says.

Armed with a new camera and little experience, Stanton built HONY. Stanton claimed knew he could reach over one million followers after finding one true fan of his work.

“When you find something bad and different, you can work with that,” Stanton says. “Because you know it’s going to get better, but it’s always going to be different.”

Even though his first book came out in the October 2013, the blog has already evolved past what is presented in print. His next book will not be a sequel, but an example of the blog’s development. No matter the changes, however, Stanton’s photographic philosophy remains the same.

“If I do have a philosophy, it’s to avoid injecting that sort of philosophy into my work … I just try to take every single person as individually as possible,” Stanton says.

Ohanian brought his speech to a close after disconnecting with Stanton, but reminded everyone to take advantage of opportunities as early as possible. Comparing life to an old-school video game, everyone is on their last life with the game about to reset.

“I know [as a kid], I played a lot harder on that last life,” Ohanian said.