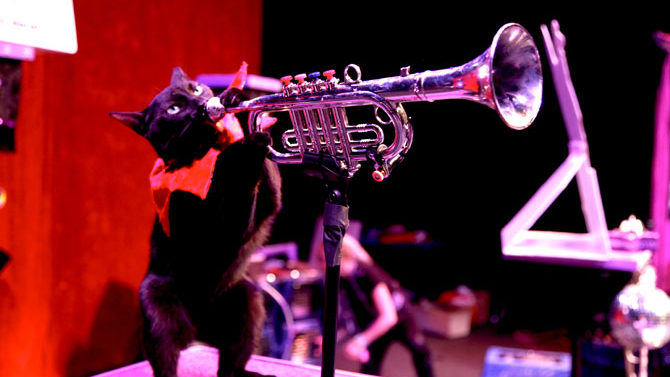 Picture cats jumping through hoops, cats walking on tightropes, cats playing the cowbell—in short, a traveling cat circus. The Amazing Acro-Cats are returning to Athens, where they will be performing at the Morton Theatre on the evenings of Friday, Mar. 13 and Saturday, Mar. 14. The Friday show is at 7 p.m.; Saturday’s shows are at 3 p.m. and 8 p.m. Tickets are $19-$47 in advance, $5 more at the door.

Acro-Cats was started in Chicago in 2006 by Samantha Martin, a longtime animal trainer. Prior to forming this feline festival, Martin ran a circus comprised of rats, suitably titled “The Amazing Acro-Rats.” As it turns out, the rat circus did not sell. Cats, on the other hand… People loved it. First, there was an Animal Planet feature in 2011, then, a New York Times spotlight in the summer of 2015. In the fall of 2015 came the peak of Acro-Cat fame, perhaps, with an appearance on “The Late Show with Stephen Colbert.”

In 2017, Martin relocated the Acro-Cats from Chicago to Griffin, GA, drawn by the state’s burgeoning movie industry (for which she trains animals) and the more cat-friendly climate. However, shortly after her move, Martin was diagnosed with cancer and had to put Acro-Cats on hold for most of 2018. After a bumpy but successful period of treatment, Martin is now cancer-free, and Acro-Cats have been back on tour since 2019.

Entertainment is at the core of Acro-Cats, but Martin puts the show to benevolent purposes. Acro-Cats donates part of its proceeds to local animal shelters, incorporates rescued house cats into the show, and arranges for the adoption of foster cats and kittens. (Since 2009, Acro-Cats has helped foster some 250 cats.) In conjunction with these aims, Acro-Cats also propagates new perspectives on cat behavior, training and sociality. “People should raise their cats more like they raise dogs,” Martin claims. It is a commonplace, Martin says, that “you don’t just put [a dog] in a doghouse in the backyard and then throw food at it a couple times a day,” but when it comes to cats, “people leave out a bowl of food, and they buy a few toys for them, and then they wonder why my cat doesn’t care about me, or, oh, my cat’s destructive, oh, my cat’s breaking things.” Such human-cat miscommunication leads some people to give their cats up. It disincentives others from adopting rescue cats, who may face squalid living conditions or euthanasia.

Thus, Acro-Cats strives to show that cats are trainable, and trainable using only positive reinforcement techniques, like associating the movements of tricks with receiving treats. Just as one might teach a dog to sit, one can teach a cat not to scratch furniture, or to run to their crate during an emergency, or to, erm, ride a skateboard. “Not only can cats be trained, they should be trained,” Martin says. “Who’s going to leave behind a cat that gives you a high-five when you come home from work?”

On a practical level, then, Acro-Cats simultaneously provides a zany form of entertainment and a service to cats and cat owners alike. Like many forms of animal entertainment, though, anthropomorphism underlies Acro-Cats. Acro-Cats shows animals doing what humans do: playing instruments, wearing clothes, skateboarding. When we anthropomorphize, we are liable to level the difference between an animal acting out of pure volition and an animal acting for a treat. The two need not be mutually exclusive: a dog may come to enjoy playing fetch or hunting only after being trained to do so. But, as you are likely to notice from watching an Acro-Cat closely, cats aren’t intrinsically interested in pawing a piano or walking on their hind legs. They would probably rather chase bits of yarn, or scratch their paws against your rug—things they don’t need to be taught. This isn’t a hefty ethical problem, but it may lead us to substitute understanding animals for being entertained by them.

That said, if audiences enjoy the anthropomorphic aspects of Acro-Cats, they will not ignore the specificity of the cats themselves. Martin notes that some of the best Acro-Cats moments are when the performers deviate from the script, when they display their full-fledged cattiness: “Sometimes they come out, they stretch, they groom. And then sometimes they just leave the stage.”