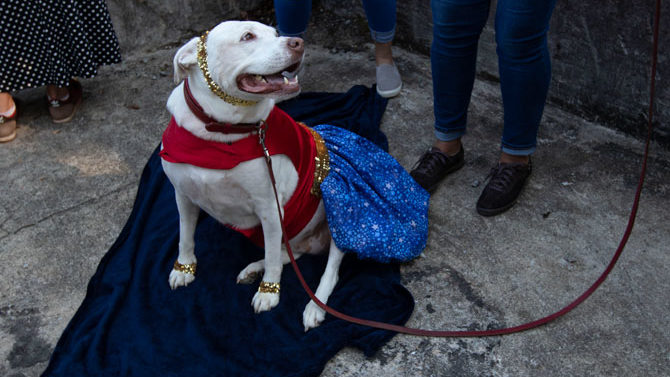 On Sunday, Athenians will get another chance to see dogs in costumes parading around one of our most historic neighborhoods when Boo-le-Bark on the Boulevard returns for a fourth annual edition, kicking off Athens’ Halloween season with a daylong dose of furry fun.

While cute dogs in creative costumes on its own is nothing to bark at, this year’s parade has been amped up with a theme: ”Boo-le-Bark Rocks and Rolls.” As the title suggests, event organizers plan to pay homage to Athens’ music history with themed decorations, local musicians and, hopefully, one or two dogs dressed as Michael Stipe.

Live music will be incorporated into every part of the event, including registration, the parade itself and the carnival, which takes place at the Jittery Joe’s Roaster after the parade is over. Local band New Horizons will play during registration to kick off the day, and the Vinyl Strangers will close it out during the carnival.

Boo-le-Bark is presented by and benefits Athenspets, a local volunteer organization that helps prevent overpopulation in local animal shelters and funds medical procedures for the less fortunate pets. Lisa Milot, chair of the Boo-le-Bark committee and executive director of Athenspets, says Boo-le-Bark is equal parts fundraiser and fun event.

“It’s become an entire neighborhood event, where people will line the streets and porches to watch the dogs,” Milot says. “The parade benefits Athens, which also benefits the neediest pets in our community.”

Though Boo-le-Bark is best known for its parade, it also includes a Canine Costume Contest, as well as a Canine Carnival. The costume contest has five categories: Cutest Costume, Most Creative Costume, Best Themed Costume, Best Handler/Pet Combo and Best Overall. While dogs and handlers are encouraged to dress according to the theme, all costumes are welcomed.

Each winner will receive a gift basket filled with gift cards and prizes from local businesses, and the Best Overall winner will be the grand marshal of the parade. As an added bonus, spectators of the contest can expect to see a local dog play the piano.

“It was a corgi mix dressed up like a loaf of Wonder Bread,” Milot says. “So simple, but so wonderful.”

The parade will end at the Jittery Joe’s Roaster, where there will be food vendors and live music. Parents can expect a family-friendly station where kids can play dog-themed games and participate in interactive events.

The Boo-le-Bark board has worked to make the day special for pet owners, as well as those looking to add a furry friend to their home. Both Athens Clarke-County Animal Control and the Madison Oglethorpe Animal Shelter will bring an assortment of dogs to the event for people to pet and, if they’re so inclined, adopt.

All of Sunday’s events are free to attend, and registration to walk in the parade is $15 in advance and $25 the day of, if space allows. The costume contest is an additional $10. More information can be found on Boo-le-Bark’s website, barkonboulevard.com.

Need some inspiration for your pup’s Boo-le-Bark getup? Here are a few ideas, free of charge.

Choco-latte Lab: Perfect for this high-energy breed, a coffee costume captures the buzz your doggo can never seem to get rid of.

CatDog: Pay homage to a beloved ’90s cartoon with this quick, easy costume. Simply attach a stuffed cat to the back of your pup, and no one will know that you waited until the last minute.

Mail Dog: Perfect for the dog with an unhealthy obsession with the U.S. Postal Service, this costume is an ironic way for her to live out her dream of finally catching up with the mailman.

Frenchie Fries: For all the French bulldogs out there. Cut some cardboard in the shape of a fry container, and attach it to your pup. As an added bonus, order a hamburger costume to match, either for your other dog or yourself.

Dog Marley: If your pet is as laid-back as the legendary musician, take some dreadlocks and glue them to a headband so others know how chill he really is. Multicolored jacket and hat are optional.