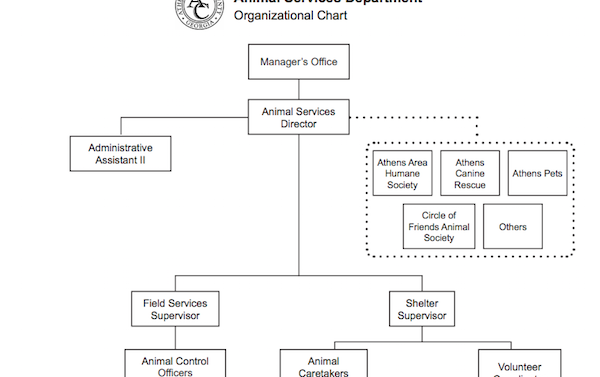 
The organizational chart for the new Animal Services Department.

Selah Gardiner was the volunteer coordinator in what used to be the Animal Control Division. She previously worked at the Humane Society for Greater Savannah, where she assisted with fundraising, shelter operations, staff training, relationship building within the community and the opening of a new spay/neuter clinic, according to an ACC news release.

Gardiner replaces Animal Control Administrator Michelle Carrigg and Central Services Director David Fluck as head of the county’s animal arm. After reports surfaced that shelter staff had mismanaged a parvo outbreak at the dog pound and a suspected panleuk outbreak among cats that turned out to be false, Williams asked for Fluck’s resignation. Carrigg is now the field services supervisor.

The ACC Commission voted to reorganize Animal Control last week, approving a plan to split Animal Control off from Central Services—a catchall department that includes everything from landscaping to maintaining county vehicles—and rename it the Animal Services Department, with the director reporting directly to the manager. Williams and commissioners also combined five part-time positions into three full-time jobs.

Enter the Garden Portal, and More Music News and Gossip

Flagpole Premieres: Je Suis France, ‘Looking for Someone Like Me’ Video