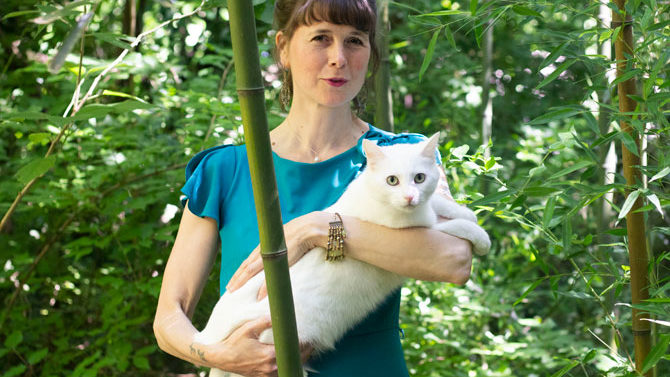 Humans have wondered for centuries what it would be like to be able to know what their pets are thinking. For open-minded Athenians, this wish may become a reality. Local woman Theresa Flemming says that not only can she communicate with animals, but she wants to teach others to do so, as well.

An educator by trade, Flemming calls herself a pet telepath, or someone who can communicate with animals on a nonverbal plane. She says she began to experience such contact with animals when she was a teenager, and what she heard from them was alarming.

“It was very difficult as a 15-year-old to be able to hear from animals in certain situations,” Flemming says. “I love to do this, but the pain is incredible.”

Flemming says the reason for most animals’ pain is largely due to human interference in their lives. She says she constantly receives messages from animals asking for help or attempting to communicate their struggles.

Flemming acknowledges that her unique skill is not something that is wholly accepted in society. Yet she insists that, although telepathy is considered something that is supernatural or otherworldly, it is a practice that anyone can enjoy, once they are taught.

It is for this reason that she has decided to teach others how to communicate with animals in a safe, non-threatening way. She says that to teach someone the way of clairvoyance can take as little as three hours, but to do it safely can take up to a year of practice and teaching.

Done correctly, Flemming says, sending and receiving messages from animals is something everyone can learn. “I’m very passionate about the fact that we are all capable of functioning on that level,” Flemming says.

Flemming is called in when an animal has a problem that couldn’t be solved through traditional means. She picks up information from animals without touching them. Instead, she “sees” the messages that the animal wants to communicate. Often, she says, an animal will tell her of a physical or emotional ailment from which it is suffering.

She says she will often see images or hear certain words from animals, even across long distances. In fact, she recounts one instance in which a horse told her it was having pain in its hooves, and after a trip to the veterinarian, the owners found out that the horse had developed a tumor in its hoof.

Flemming says one effect of a telepathic exchange is that one is able to see from an animal’s perspective. She says that after someone is trained, his or her senses will learn to “tune in” when something is important.

For her, she says, this happens fairly often. Sometimes, the animal’s problem is physical and easily fixed. Other times, it is emotional and may require several visits or sessions to reverse any damage that has been done.

“Often, an animal will mirror its human, meaning that it will pick up on the stress from the humans that live with it,” Flemming says. “When you’re in that healing state, you can sometimes make changes very quickly.”

Flemming says there are around 60 books that have been written on this specific style of animal telepathy, and she has also begun to work on her own. Her goal is for the people of Athens to understand that communicating with animals does not have to be strange or intimidating.

“Not everyone will understand,” Flemming says. “But everyone can benefit.”