Local Company Keymaster Is a Board Game Success Story 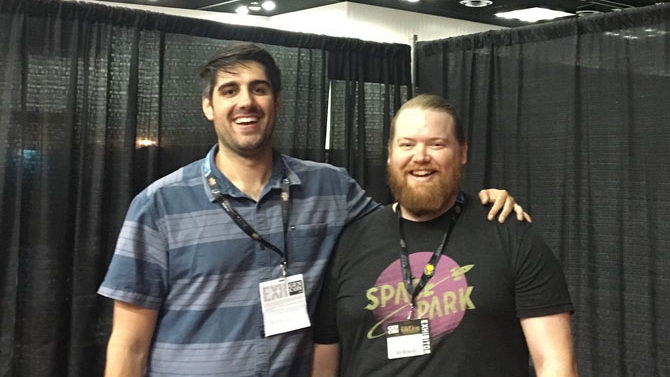 “Making games all started when I found out I needed my third open-heart surgery,” says Kyle Key, one half of Athens-based board-game publishing company Keymaster Games.

Key was born with a heart condition that necessitated three surgeries, all before the age of 30. After doctors told him that parts implanted in his second surgery would need to be replaced, he knew he was facing six long months of planning, worrying and waiting. “I really leaned into the hobby of board games,” he says. “I wanted friends and family around a table, and it was so fun to spend that time with them.”

With loved ones nearby, Key discovered his lifetime fondness for games was turning into something more. “I found myself saying, ‘I hate how this one ends,’ or, ‘Why did they make this decision?’… So, I started making house rules,” he says. From there, it wasn’t much of a leap to conclude he may as well make his own games.

Mattox Shuler, Keymaster’s creative director and game developer, met Key shortly after his most recent surgery. The two quickly connected over their shared love of games. Shuler and his wife had recently relocated to Athens from Seattle, where they, too, had rediscovered the hobby. After setting up regular game nights, Shuler and Key became fast friends and started considering the feasibility of starting a game design and publishing company.

Key had already designed two games that were ready to pitch to publishers, but “the real spark was when Mattox made Control,” he says. “The first time we played [Control] was at a pizza place in Jefferson. Mattox dropped down a deck of cards on the table, and we realized, ‘We could make this game.’”

A quick and easy card game about trapped time-travelers, Control became an overnight success after Keymaster launched it on Kickstarter in January 2016. The duo set a goal of $7,500 and ended with almost 10 times that, with pledges totaling over $73,000.

Key had done his preparation, but never anticipated this level of enthusiasm. “We had spreadsheets printed out for a scenario if we sold 100 copies, then a scenario if we needed to print 500 copies,” he says. Keymaster sold 4,200 copies of Control during the campaign.

Soon, the company was off and running. Their next title, Campy Creatures, a bluffing card game where players take on the role of mad scientists sending out classic movie monsters to capture unsuspecting mortals, hit Kickstarter in February 2017 and was funded in less than 27 hours. Featuring eye-catching artwork from artist Josh Emrich, Campy Creatures, alongside Control, cemented Keymaster Games’ reputation as an exciting new player in the industry.

Living and working in Athens helped Keymaster find its footing in the booming world of board games. Board games “are in a similar place where craft beer was a few years ago,” with more designers and new games hitting the market than ever before, says Shuler. “Athens has such a great creative community, and connecting with that has really helped us” keep up, he explains.

As the company and their families grew, Shuler and Key’s time began to stretch thin. The team expanded to four as Keymaster brought on two staff members to handle finance, operations and marketing. For Keymaster’s next phase, the duo also began working with outside designers. Caper and Space Park, both released in 2018, were the first Keymaster titles created by other designers.

“We are small, so we can work closely and in tandem with the designers,” says Shuler. “We have weekly sessions where we discuss” the games, offer feedback and tweak rules.

Keymaster’s latest title, Parks, is set to hit Kickstarter Jan. 29. Parks is a tile and card game featuring illustrations from Fifty-Nine Parks, a collective of artists and creators formed to celebrate the United States’ national parks. In the game, players take on the role of hikers as they trek trails and visit actual parks. As players hike past mountains, forests and rivers, they collect memories, which they use to access famous parks.

The game “gives you a whole lot of feels,” Shuler gushes. Typical of Keymaster releases, Parks combines elegant design, high-quality components and easy-to-learn gameplay with a depth of strategy that will appeal to casual and serious gamers alike. Five percent of all Parks sales will also be donated to the National Park Service.

Keymaster titles are now a fixture on board-game hobby hot lists, review shows and the convention circuit. As the company’s catalog expands, they hope their presence in Athens grows as well. “We just have an office where we do all of our work in, so we are trying to figure out how to be more present [in town] without a brick and mortar” storefront, says Shuler.

Key and Shuler’s appreciation of board games’ ability to bring people together—whether loved ones gathered around a hospital bed looking for a comfortable distraction or someone new to town looking to make a connection—has blossomed into a thriving business that many locals still don’t know exists.

“Most people are like, ‘What? You make board games? That’s a thing? And you are here [in Athens]?’” says Key. “I get that all the time at the bank. We’d love to get less of that reaction.”