For Athens Creators, Podcasting Is the Next Frontier 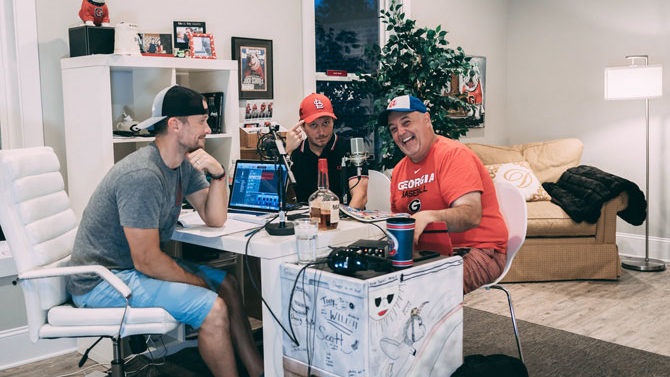 Athens is a city famous for its creators. In recent years, podcasting has given local artists, musicians, chefs and others a new sandbox to play in. Podcasting has evolved from frivolous hobby to big business—and the Athens podcasting business is booming.

“I had been a podcast fan for years, but one of the reasons I wanted to get into it was really thinking about how to be a better listener,” says Athens chef and restaurateur Hugh Acheson, who debuted his first podcast, “Hugh Acheson Stirs the Pot,” in February. Each episode features Acheson interviewing friends and peers about their thoughts on food—“food as nourishment, food as business,” as he explains—or wherever the conversation may lead.

“It’s meant to be exploratory and interesting, but not revelatory,” Acheson says. “Everything is meant to be a fly-on-the-wall perspective of a conversation, and I’m just lucky to have people like [celebrity chef] Tom Colicchio in my contacts.”

For people like Acheson, podcasting offers more than the chance to sit and record a chat with a friend—it has become a thriving industry. There are presently over 600,000 podcasts available across numerous platforms, bringing in over $500 million in ad sales in 2018. The recent announcement of Luminary, a $100 million startup that aims to be the “Netflix of podcasts,” featuring star-fronted shows by Conan O’Brien, Malcolm Gladwell and Lena Dunham, will only thrust the medium further into the mainstream.

The appeal of the format is easy to see. “A podcast happens on your own time—it happens in the background of things. I often put on podcasts while paying bills or running. If I sit down to watch a TV show or a movie, it has my full attention, but I don’t have to [consume] podcasts that way,” says Will Leitch, an Athens-based writer and founding editor of the sports blog Deadspin who co-hosts two podcasts: “Grierson and Leitch” and “Waitin’ Since Last Saturday.” Leitch produces the former, a nationally targeted film review podcast, weekly out of his home.

Listeners also enjoy the ability to craft their own playlist. Scott Duvall, owner of Jawavi Films and co-host of “Waitin’ Since Last Saturday,” explains, “If you listen to the radio, you are at the mercy of what the programmer wants to put out. With podcasting, you are in charge.”

Duvall, Leitch and Tony Waller, associate director for career development for the UGA School of Law, created “ Waitin’ Since Last Saturday” while chatting over beers two years ago, and have watched it grow into a brand with over 205,000 total downloads and a top-15 ranking on the iTunes college-sports podcast chart.

Other podcasts focus on comedy, storytelling or are over-the-air radio programs repackaged and released as podcasts. There is a podcast for every subject, and every listener. “A lot of times, I’m actually getting information,” Leitch says. “Podcasts, more directly than anything else, reflect my quite specific interests. They tend to be specifically focused on things I care about… I want to listen to smart people talking about smart things.”

The seemingly endless list of podcasts is a result of the low barrier to entry and relatively cheap start-up cost. Duvall started his first podcast in 2015 and has seen the technology evolve, making it easier than ever to publish. “It can be hard if you make it hard, but now, it’s so much easier,” he says. “You can literally do everything from your smartphone. Anybody that wants to start a podcast these days can easily go pick up your phone, find a nice room with good acoustics, record their thoughts, upload and have a podcast.”

But, as the saying goes, just because you can doesn’t mean you should. Lurking within those 600,000 podcasts are many with shoddy sound and worse—shoddy content.

Local artist Jeremiah Purinton took that lesson to heart when he started “Fan Footage,” a podcast devoted to all things nerd culture, with friend Justin Vance. “[Podcasting] is hard work,” Purinton says. “It’s something anyone is capable of, but you do have to dedicate the time and effort to make it good and make people care.”

As a podcast reaches more listeners, tight-knit communities of fans tend to form. As the episode list grows, so, too, does the bond between host and listener. The format allows creators to explore endless avenues and hope the audience is willing to come along.

“So much of media is trying to get out to the broadest possible audience,” Leitch explains. “[It’s about trying] to reach as many as you can, so [the wisdom is] ‘Don’t do in-jokes.’ For me, the fun of podcasts is, screw that, man… the whole fun of the web is to find other people that like this weird thing you do and then obsess about it together. Podcasts are the perfect fit for that.” 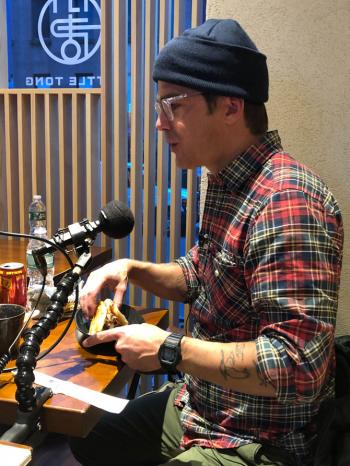 For Caty Braun, co-creator of “Campfire Files,” a locally produced podcast set to enter its second season, there can never be enough weird things to seek out on the internet. Her podcasting journey began with her and her co-host, Savanna Sturkie, enjoying cupcakes at Viva Argentine with a former Grady professor. “We both love spooky things so much, whether it’s true crimes or unsolved mysteries,” Braun says. As they chatted, they decided to create a podcast inspired by stories they would tell over childhood campfires.

Braun and Sturkie have reasonable goals. “It would be cool to at least become Georgia well-known—I won’t say famous,” Braun says. The response they’ve received seems to have them on their way. “We have some really amazing fans that have spread the word,” she says, “which is so great.”

Fan devotion to podcasts is what is ultimately moving the needle on the business end. Acheson’s new show is featured on the Himalaya Media network and is sponsored by advertisers such as Warby Parker. “Companies see podcasts as a small buy that can go a long way, and that’s key,” says Acheson. But for Acheson and most podcasters, monetization was not the catalyst for taking the leap into the medium. Of “Waitin’ Since Last Saturday,” Duvall says, “We really do it for ourselves—we don’t do it to gain notoriety or gain approval from people.”

Done well, however, podcasting is not entirely without reward. Leitch explains, “[Tim] Grierson and I have gotten more work because of our podcast—that is unquestionable… There is a Grierson and Leitch brand now that would not have been there without the show… And the number of people that only know me from [‘Waitin’ Since Last Saturday’] is pretty hilarious—and I like it.”

Duvall has also enjoyed the spoils of his local celebrity. “The craziest thing is when I get recognized by my voice… My kids are like, ‘Are you kidding me?’” Purinton, too, has seen an uptick in recognition for his art and tattoo work. “It’s great when I have clients that come in and say they listen,” he says.

The intimacy of exploring common interests with hosts, whether they are a celebrity or a neighbor, through one’s headphones makes podcasting a unique and powerful medium—one that doesn’t seem to be going anywhere. It’s a listener’s paradise these days, and for those interested in taking the leap and making their own, Acheson says, go for it.

“If you have that glee for something and you want to get to the bottom of it, tell the story of it—do it,” he says. “It’s the new storyteller’s medium.”

Hey, whaddaya know: Flagpole’s in the podcasting game now, too. In “Run It Up: The Flagpole Podcast,” our (mostly) weekly audio series, we take a closer look at stories from the current issue and address other topics of Athenian concern. This week’s ridiculously meta episode is about—what else?—podcasting and features a chat with Tim Kelly, local podcaster and author of this story. Subscribe to “Run It Up” on Apple, Android and Spotify. [Gabe Vodicka]