Arthur Buck Is Peter Buck’s Most Inspired Collab Yet 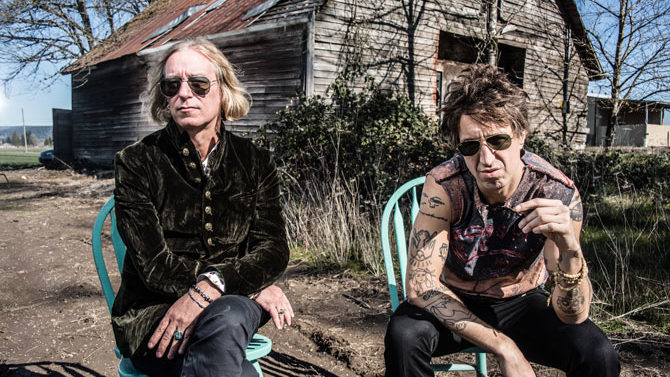 Barely two songs into former R.E.M. guitarist Peter Buck’s latest collaboration—this time with acclaimed musician and artist Joseph Arthur—one senses that this is the sound of two guys having a blast. The music is upbeat, positive, like the pair spent a morning soaking in the Pacific Coast sun and picked up their guitars after lunch just to see what kind of noise they would make. Turns out that’s exactly what happened.

Arthur and Buck’s relationship dates back decades, so one might assume this project was years in the making, but it actually sprang from a chance meeting and a forgotten guitar. Arthur was not looking for a new project, but rather a dobro he left behind after playing the Todos Santos Music Festival in Mexico, a concert Buck co-organized for years. Upon arriving back in the country, he met up with Buck, and they soon spent the days swimming and the evenings doing what they’ve done for years: writing music.

The songs came out quickly. “Once we started collaborating, there was this loose rock and roll energy that [Peter] had that was very good for me,” says Arthur. “It just really worked. It was fun.”

The pair cranked out eight songs over four days, but instead of shelving them for a future date, they went out and played a show in the town square. “It had this vibe of a new, young band,” says Arthur. “I only played guitar on one song. I just sang, and it was fun. It was like, ‘Holy shit! I’m in a rock band all of sudden.’ It was fun as hell. It makes you feel young again.”

Despite the attendance for the unannounced show by the then-unnamed band measuring in the tens, as opposed to tens of thousands, Buck’s response was surprising, says Arthur.

“I was a little nervous, but then Peter comes up to me and says, ‘Man, I hate doing shit like this—it drives me crazy. I’m really nervous.’ And that was incredible to me. We were about to play to 15 people during the day, and this guy played on every major stage in the universe and in front of millions of people.”

After that trial by fire in the Todos Santos town square, the pair seized on another opportunity, this time in Los Angeles, where Arthur invited Buck to play together after one of Arthur’s art shows.

“I went to get Thai food, and when I came back, [Peter] was already in the gallery, playing my guitar. He goes, ‘Here, I got this riff,’ and it was like out of a movie, because [then] we were writing a song. I said ‘I am the moment,’ and he said ‘waiting for you,’ and that one we played that night—it was that quick.”

The song became “I Am the Moment,” the lead track on Arthur Buck’s self-titled album, which is full of jangly acoustic and electric flourishes and great vocal hooks. For fans of Buck’s former band, the album offers some of the catchiest and most instantly accessible tracks he’s produced since R.E.M. called it a day.

There is one word Buck and Arthur bring up repeatedly when asked about writing these songs: “fun.” It’s perhaps surprising: Here are two musicians who are, willingly or not, identified with Gen X and the detached ’90s making a statement that it’s OK to be positive, to have fun—that music can be helpful.

Recalling those years, Arthur says, “We were supposed to not give a fuck, [to] not try,” but this album comes from what he calls a “positive zone that sprung up in the process. I feel like we are both looking after ourselves… taking good care of ourselves over the past couple of years, [and] that came through in the music.”

Arthur credits Buck’s demeanor, work ethic and mere presence as helping to catalyze that positive spin on his lyrics. “I started writing sad lyrics, and I thought, ‘Why are you doing that, man? That’s not really what’s up… There’s something about being in that guy’s company—that guy rubs off on you. He’s guru-ish, in a way, without trying at all. He’d probably punch me in the face if he heard me saying that.”

As they set out on the road in what Arthur calls a “post-music” world, the duo is unapologetic about having a good time. “You forget about the fun part of it sometimes, [but] it’s supposed to be fun,” says Arthur. “If it’s not, that’s dangerous, because it usually sucks—people can hear that.”

If you’ve been missing Athens’ most famous musical export, or if you’re a thirty- or fortysomething who’s grown beyond your “the world sucks, so why try” phase, Arthur Buck may be the therapeutic rock-and-roll cure you didn’t know you needed. And the group will be ready to rock the 40 Watt. By the time they hit Athens, they’ll be five shows into the current tour, and “by that time, we’ll have road legs,” Arthur says.