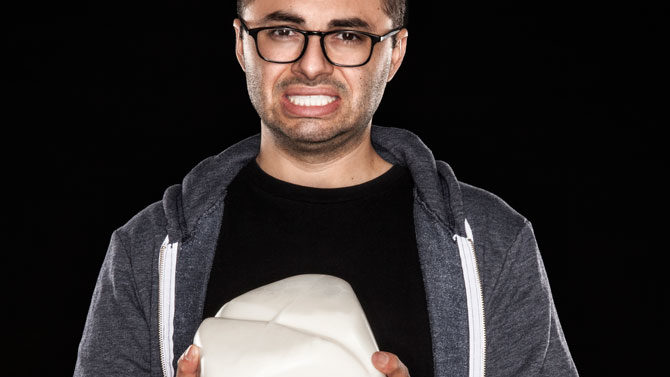 Joe Mande is an accomplished television writer and actor with credits on “The Good Place,” “Parks & Recreation,” “Kroll Show” and “Delocated.” He is perhaps most recognized as Ben, the awkward assistant turned romantic interest on the hit ABC sitcom “Modern Family.”

However, Mande’s most innovative and subversive material comes from his stand-up comedy and his social media persona, both of which have undergone major shifts throughout the past decade. Late last year, Mande quit Twitter in dramatic fashion: In an open letter, he compared reading his Twitter feed to the act of smoking a cigarette that had been dipped in embalming fluid. To Mande, using the service had become a horrifyingly unpleasant experience, yet he couldn’t stop. Mande explained how the app had “fully taken over” his life, while revealing negative aspects of his personality that he didn’t want to embrace.

While lengthy screeds about quitting social media usually elicit groans, Mande’s letter struck a chord with many people who had grown tired of the toxicity of Twitter and many of its users in the Trump era. Mande’s willingness to drop the website for the sake of his mental health felt like a revelatory statement at the time, and it’s a mindset that people have become more willing to embrace ever since.

Before leaving most of social media behind (outside of a mildly active and relatively innocuous Instagram account), Mande had a bit of a reputation for getting into online feuds. Many of his funniest spats—such as an intense feud with former NBA All-Star Gilbert Arenas that ended with the baller deleting his account in embarrassment—have unfortunately been lost to time.

Perhaps Mande’s most notable and forward-thinking conflict, though, was with sparkling water empire LaCroix. Mande had been an outspoken advocate for the brand long before it was trendy, to the point that he declared himself the “unofficial spokesperson” for the company. For a while, LaCroix lightly embraced Mande’s self-assigned role, even sending him the occasional bit of merchandise. However, Mande’s often-controversial online presence led to several boycotts of the water by conservatives who were unhappy with the association. In 2014, LaCroix sent Mande a cease-and-desist letter. In response, Mande now claims that “LaCroix is poison.”

Mande’s stand-up, much like his social media antics, is aimed at subverting people’s expectations and turning institutions on their heads. His first comedy album, Bitchface, was released in the style of a hip-hop mixtape, complete with skits and DJ tag drops. In between jokes about how weird it is to drink cow’s milk and getting unknowingly mugged while high at Domino’s, there are hilarious voicemail messages from The RZA, Fabolous and Amy Poehler.

His latest set, which is available both as an album and a Netflix special, is called Joe Mande’s Award-Winning Comedy Special. It opens in the style of a documentary, explaining Mande’s desire to win the prestigious (and fictional) American Humour Award. After getting advice from some fellow comedians—as well as Blake Griffin—Mande sets forth to put together the most statistically perfect comedy set known to man.

The set itself is amazing. Bits about the NYPD’s infamous cannibal cop, the impressive production value of ISIS’s recruitment videos and a misplaced dick pic rank among Mande’s most offensive and shockingly hilarious observations to date. It all culminates in an epic tale about Mande and a friend getting insanely high and attending a taping of former Arkansas governor and current conservative pundit Mike Huckabee’s horrible late-night talk show.

Throughout the special, Mande makes note of applause breaks and other stats on a piece of paper, as the camera occasionally pans over to a panel of judges who are analyzing his every move. The awards angle, as silly as it ends up being, is a creative way to break outside the sometimes-painful tropes of stand-up comedy specials.

Now, Mande is stepping out on a mini-tour, appropriately titled “We Live in Hell.” Athens is one of only six stops Mande is making, so if you’ve been missing him on Twitter, here’s a prime chance to hear his thoughts on current events live and in person.