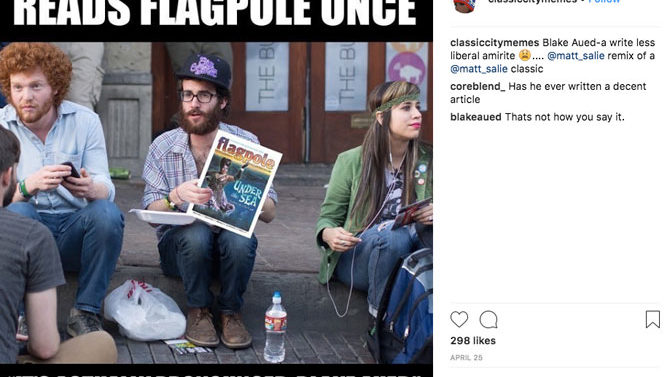 Though attempting to describe internet memes in print is a futile gesture at best, some of CCM’s recent highlights include:

The creator of CCM, who prefers to remain anonymous, says the account began as a way to focus their love of memes in the general sense into a new, highly specific creative outlet. “I didn’t want to be just another random account shouting into the ether, so I went with the local theme,” they say. “It was a good way to build an audience organically while celebrating the town in a new way.” 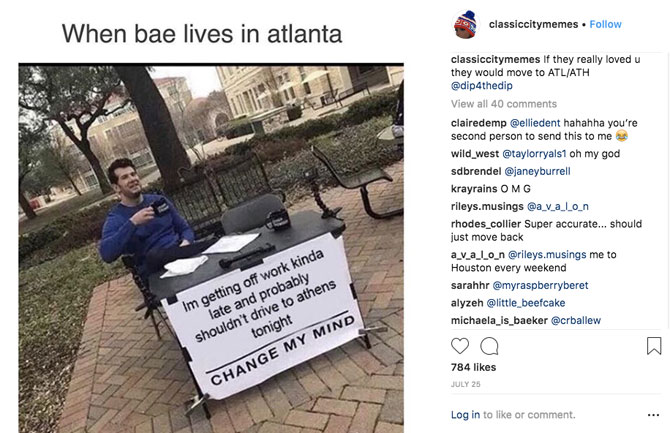 With just over 6,000 followers, CCM isn’t really in competition with more straightforward, somewhat generic Instagram accounts like @my_athens or @downtownathensga, each of which boasts tens of thousands of followers. It’s also separate from student-courting accounts like @barstooluga and @blacksheepuga, which farm or repost their content from anonymous students and run accounts dedicated to every major school in America. Rather, CCM has a certain human appeal that can’t be replicated by companies attempting to build a brand.

Part of that appeal comes from CCM’s ability to tap into elements of Athens’ insular and unusual culture that other accounts don’t attempt to portray.

“Athens is great, which you may have heard,” jokes CCM’s founder. “There’s so much reverence for the town—mostly deserved—but a lot of that reverence is humorless. Like, Athens is great because R.E.M. made music here 30-something years ago? But the town itself actually has a great sense of humor. It’s not as self-serious as Portland, or even Asheville. It’s also an isolated culture literally enclosed by a loop, which breeds inside jokes, and the account has become a weird chronicle of that culture.”

While Athens culture is loosely defined and ever-changing, CCM’s creator finds that certain topics and people attract more attention than others. “Reign is always a very safe bet,” they say. “Reign memes are retired unless he runs for office or something. Anything to do with food culture also tends to have a broad appeal.” (The person also notes that people respond heavily to posts about depression, but adds, “That really isn’t my forte. I’m an embarrassingly happy meme admin.”)

And while CCM is not always family-friendly, jokes about specific people are rarely too harsh. “I’m not going to make a swipe at a person or business that isn’t a public figure,” says the admin. “Even if it would be funny, it’s just a mean thing to do—unless they’re in Oconee County.” 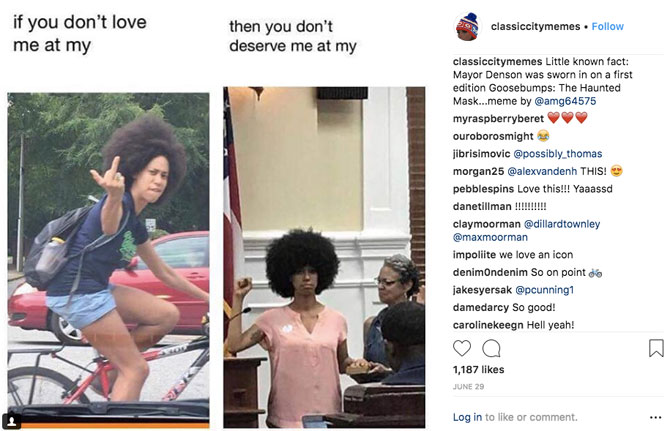 While a few people have reached out to the account after being the subject of a meme, the operator says that communication has been “in good fun and [come] from a place of love.” The only post that has caused minor controversy and outrage was a recent photo of The Tree That Owns Itself with a “For Sale” sign in front of it.

Due to the nature of the artform, the process of creating a meme is rather easy. CCM’s creator, who says they have never used Photoshop in their life, says although the way they put posts together isn’t too complicated, they try to diversify the types of content on their feed.

“There are generally two types of posts. The first is the lazy type, where I come across a meme format—Distracted Boyfriend, Starter Pack, Left Exit 12 Off Ramp—and try to come up with the funniest local spin I can. These are literally memes, I guess,” CCM’s creator says. “But the majority of my posts are just stupid original art pieces crafted on apps like Union and Phonto. I also get great contributions these days from talented local artists.”

When it comes to the future of the account, CCM’s founder has a few ideas, but hints that a Flagpole feature might signal the beginning of the end.

“Having a far-right politician who ran on the size of his truck and lives in the People’s Republic of Athens-Clarke County should provide plenty of content, but I’ve mostly exhausted my source material at this point,” they lament. “This interview could be the death knell of CCM.”