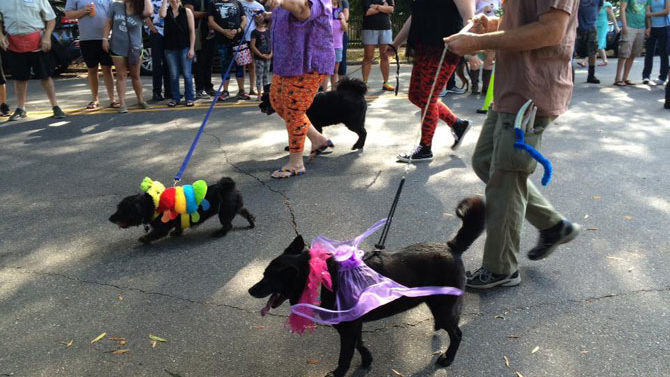 The inaugural Boo-le-Bark on the Boulevard dog parade, in 2016, was a huge hit.

“[People] talk about it like it’s been going on for a while—that’s how successful it was,” says Marilyn Estes, co-chair of the committee in charge of the the event, which began last fall as a fundraiser for local nonprofit Athenspets, an all-volunteer group that helps animals in Athens-Clarke County shelters find permanent homes.

“When we started it, we set out for it to be an annual event,” says Estes. “We never really stopped. We were evaluating everything right afterward.”

This year, the parade and its accompanying Canine Carnival are back and, organizers say, even better than before. In its second year, the committee, made up entirely of volunteers donating time to the cause, didn’t have to formulate a plan to coordinate the parade’s biggest moving part—the dogs—due to the success of last year’s strategy. Instead, the group focused on smaller tweaks to elevate the event as a whole.

“There weren’t any issues [last year]. There weren’t any dog fights. We credit that to responsible dog owners in Athens,” says Estes. “Everybody who knew their dog wouldn’t do well in that situation left them at home.”

This year’s format will be the same as last year, with pre-registration required for each dog (the registration period closed Oct. 2), and dogs placed in smaller groups with people walking in between each group. The parade will again make its way through the historic Boulevard neighborhood and culminate in the Canine Carnival at the Jittery Joe’s Roaster on Barber Street. The event was designed with help from dog behaviorist Tricia Hall of Bone-A-Fide Dog Training, who will return for this year’s parade.

“What we were just trying to do was improve upon little [things],” Estes says of changes to the event. These improvements include an increased food truck presence—Holy Crepe, Mac the Cheese, the Lil’ Ice Cream Dude, King of Pops and Piedmont Provisions will all be present—and a more streamlined approach to Anne Yarbrough’s doggie photo booth, which was a huge hit at the 2016 iteration. (Check out one of Yarbrough’s photos on this week’s Flagpole cover.)

DJs David Osborne and Sound Insight Productions will add music to the event, supplementing rocker Rev. Conner Tribble, who plans to return for a second year. Local vendors have been scheduled for the Canine Carnival, with one in particular, Hughes Subaru, offering free dog-tag engraving services. The kids corner of the parade—a no-dog zone—will feature children’s band Allegro.

“It’s really just trying to do it again and do it as well, and focus on the fact that it’s bringing the community together,” says Lisa Milot, a representative for Athenspets. Committee members say they hope people all around Athens, not just from Boulevard and surrounding neighborhoods, feel welcome to join in the festivities.

Last year, the parade raised $4,500 for Athenspets, with support from 60 Athens businesses and individuals. Milot says that recently, Athenspets “incorporated and became a 501(c)(3) so that we could raise funds and better help the animals at the shelter.” These funds are allocated for necessities like spaying and neutering, as well as specialized food for animals with grain allergies. Though the parade only features dogs, funds raised will assist all animals in the ACC shelter.

The parade will also feature animals in need of good homes. “There will be shelter dogs walking in the parade,” says Milot. “So, if you see a Hawaiian-themed dog, that’s probably one of our shelter dogs.”

Ultimately, Boo-le-Bark aims to bring the community together for a genuinely good time while raising money for a worthy cause. If last year’s event is any indication, Sunday’s puppy-filled afternoon is likely to succeed on both counts.

“People were smiling so much” at last year’s Boo-le-Bark, says Estes. “It was this wonderful escape from everything. When you get together and you start looking at dogs in costume, you just take a break.”