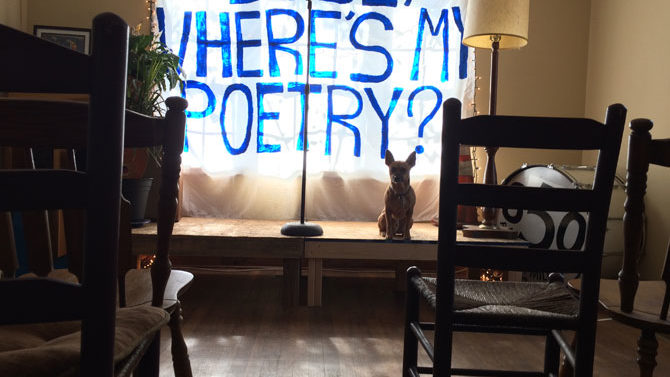 The Athens poetry scene is booming.

Poets and organizers say local live poetry is at one of its strongest points in years—and it’s also growing faster than anyone could have expected. According to Will Stanier, co-founder of the bimonthly Dude, Where’s My Poetry? showcase, this is due to a small but dedicated group of people who work to maintain a strong presence at venues across town. “A group of 20 or 30 people have been reading, writing, performing and, most importantly, organizing together for enough time now to build a significant scene,” says Stanier.

Alex Johns, who runs the well-established Word of Mouth series at The Globe, says the scene’s emphasis on bringing people together is what has kept it afloat for so long. Johns, in particular, holds onto the memory and motto of his mentor and Word of Mouth founder, the late Aralee Strange.

“She was not only an amazing poet, but a real cultivator of talent and of community,” says Johns. “She placed a great emphasis on immediacy and energy in poems, and on art as a communal act. The way she put it was, ‘If you’re going to ask someone to spend time with your work, either on the page or in the room, you owe them something.’”

KyKy Renee Knight, a local poet and the leader of the band Harlot Party, is a strong believer in the power of performance.

“Performing poetry live changes my writing every time I perform,” she says. “When I read live, I am studying something different—the way my words feel, the way my voice feels, my delivery. Sometimes I like to include the audience with participatory lines. Reading live is like letting my poetry live, in a way. Then, after hearing it ‘alive,’ I go back and edit accordingly. I think this is true for performing poetry as well as for music. Performing live is essential to developing a piece in my writing process.”

While showcases at venues like Go Bar, The Globe and Avid Bookshop continue to prop up the scene, another local movement is taking live poetry somewhere more personal. In basements and at house shows all over town, readings are becoming a staple of the Athens social experience.

“There’s another dimension to the scene now,” says Stanier. “People are doing things on their own, collaborating, taking hints from other places. The DIY scene in Athens has been really healthy the last couple years. A lot of the live poetry scene is just part of that DIY activity. Much of what I do with Dude, Where’s My Poetry? just mimics what I see in the larger local music scene. I use what my musician friends do as workable examples.”

When it comes to DIY poetry in Athens, Dude, Where’s My Poetry?, which Stanier co-founded with friend and roommate Kelly Petronis, is at the head of the pack. According to Petronis, the series has thrived off of making slight tweaks and improvements to the kinds of showcases you would see at normal venues.

“First off, the space is in our home, so no one feels obligated to buy beer,” says Petronis. “It’s also not an open mic. We [limit] the number of poets to three. This respects the time of the audience, and gives poets a chance to really flex their craft like they’ve probably never done before. It allows them the time to give a full expression of the body of their work—for it to be validated, and to hopefully transform. We also include one musician to close the show, because music and poetry are really just two sides of the same coin.”

Jay Morris, the founder of Go Bar’s live showcase, Goetry, thinks there are new heights waiting to be discovered within the DIY movement. “When I was a freshman [and] sophomore in college, I didn’t think anyone would stick around for poetry at a house party. But I’ve been seeing it happen lately, and I want that to happen more. I was blown away the first time I went to DWMP. Hosting at venues is great, but I feel like DIY has a lot of untapped potential.”

Ashley Crooks, a newcomer to Athens poetry, likes the range of local showcases but thinks there is still room for growth. “Athens isn’t as lively as I’m used to in NYC, or even Atlanta, but it has a lot of quality,” she says. “There is a diversity of the types of events, and each has its own vibe. I’m still on the lookout for a competitive poetry scene, though. I wish there were more weekly events, and a poetry slam team to compete in the National Poetry Slam.”

One common goal among local poets is bringing more people into the scene. Many hope that Athens’ traditional showcases and the more experimental DIY outlets will come together into something larger and of greater importance to the community.

Goetry co-host Stephen Wack says the Athens poetry community has a collective goal. “We want to help foster the opportunity for those who might have something to say, but otherwise feel too intimidated to speak, to do it. Speak out. Share with us. Afraid of feeling vulnerable? I’ll say it now: Vulnerability and self-expression is not weak, and shouldn’t be shied away from.

“The poetry scene is made up of some of the most supportive, open-minded individuals I’ve had the fortune of meeting,” Wack continues. “It can be extremely cathartic to get up on stage for those few minutes and express yourself passionately about something to those who are willing to listen.”