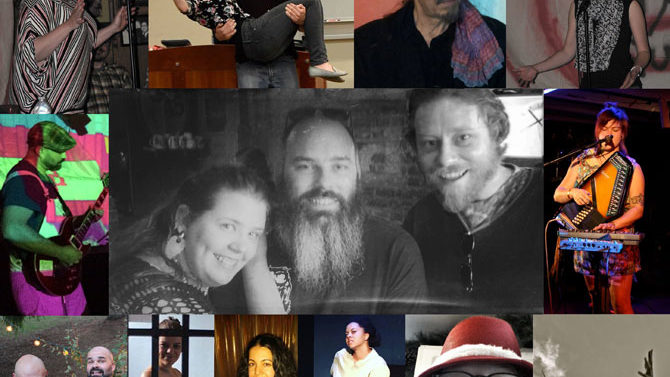 A new festival is hitting the streets of Athens over the weekend of Oct. 22–25. The first annual Classic City Fringe Festival will include a series of live performances spread across several downtown venues. The CCFF will feature a melting pot of alternative artists from Athens, Atlanta and the Carolinas whose work does not fit the typical fine-art bill.

Fringe festivals are an international tradition dating back to the mid-19th Century. Traditionally on the edge of the art world, fringe art is all that does not fit into standard exhibition or performance spaces—from improv street performances to house shows to small production theater.

“Fringes, in general, aim to allow art to thrive. We don’t tell people what to perform or what to think about a performance. It’s just a chance to say, ‘Here, look at this.’ Of course, for the performers, it’s a chance to be free with their artistic ideas,” says volunteer coordinator Megan Dunn.

Directing the event is local artist Mux Blank, director of both the Moonlight Gypsy Market and the newly opened JOKER JOKER Gallery, and the man behind the “TV Head Guy” persona. The festival aims to encourage people, through entertainment and just the right level of shock factor, to embrace alternative forms of creative expression. Blank notes that the goal is ultimately for “more people [to] seek out this sort of entertainment from our community, because there is so much of it happening all the time, with only a limited audience seeing it.”

The Classic City Fringe Festival is in the process of becoming a nonprofit. Directors say their goals include putting on events throughout the year, funding projects in the community and even offering small grants for artists to develop their work.

To enter this weekend’s performances, visitors must purchase tickets via Fringe Bucks box offices, located at various CCFF venues throughout the festival or available online for pre-purchase. One Fringe Buck equates to a $5 ticket. Because seating will be very limited at certain venues, reserved seating will call tickets can be purchased in advance at classiccityfringefestival.com.

PERFORMANCE: There will be a variety of experimental music, theater, storytelling and comic performances. Although there is no official theme, viewers will get a general sense of honesty, transparency and considerations of perception.

“The idea of a ‘fringe’ performer is… something that doesn’t get much attention… especially in the festival format,” says Blank. “I hope that through this festival we can make people aware of these other forms of performance art beside music, and show them that as an art form there is so much that can be done with it.”

MUSIC: The festival’s musical acts are largely electronic and noise-based. While some will function in a traditional format, others will include visual and interactive components. On Sunday, the festival’s Family Day, local musicians Kai Riedl and Roger Stahl will come together as Electrophoria for “Jazz, Baby,” an interactive music-making experience for children. There will be a table staged with instruments and microphones and open for kids to come up to play with creative sounds, which will then be mixed into an ambient track.

Despite the title, no jazz music will actually be played. “The ‘jazz’ in ‘Jazz, Baby’ is a broad term meant to signify free play and improvisation,” Stahl says. “I believe the official category is ‘toddlercore.’ We promise it will be pleasant and un-screechy, if at times strange.”

COMEDY: Along with some independent performances, the mainstay of the festival’s comic component will be the Comic Strip Comedy Club. Five different comedians will give unique performances on each of the festival’s three days, as well as a wrap-up performance Monday evening at The Office Lounge. Director Alia Ghosheh says the performances “will change people’s perspective on comedy as an art form… Like any art form, it takes lots of practice.”

THEATER: Storytelling takes many experimental forms at the CCFF, including “Prison Monologues, Pt. I,” a small-cast play created by UGA alum Daniel Guyton, and “Can’t Tell You Why,” a group performance by Atlanta’s Bad Ass Storytelling Quartet.

One of the more abstract performances of the festival will be the Theatre of Pure Form. Though the name sounds heavy-handed, it will be a clowning performance that is “a playful exercise in being playful,” according to Cal Clements, creator and director. Clements is the owner and manager of Rubber Soul Yoga Studio, where the performance will be held. The Theatre of Pure Form aims to encourage the audience to be present in the moment and to release judgment and inhibitions through humor.

Clements remarks, “They say that the theater doesn’t lie… meaning that what is really going on inside comes out. I want to create the conditions for such a revelation to take place… in a simple, honest and pure way.”