For an Artsy Town, Athens Lags Behind in Public and Street Art 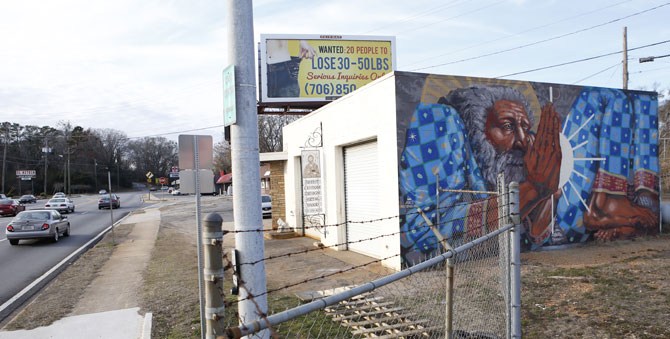 Early this year, police offered up to a $1,000 reward as they searched for a graffiti artist who decided to use the side of a downtown business as his canvas. That’s a lot of money, especially to an artist like Joel Rosenberg, 24, who painted the mural on the side of St. Udio, a design and fabrication company on Oconee Street, last year. Rosenberg thought about an alternative use for the police budget for nabbing an alleged vandal.

“It’s kind of funny, because if that $1,000 was used to commission a mural from that same guy or somebody, then do you know how much good it would do?” he says. “The public fund that’s used to try to catch this guy, what if that was used to get him to do something on a wall somewhere?”

In spite of being home to hundreds, if not thousands, of visual artists, Athens has little in the way of public art or street art—legal or otherwise—compared to some other cities. Efforts are underway to change that. 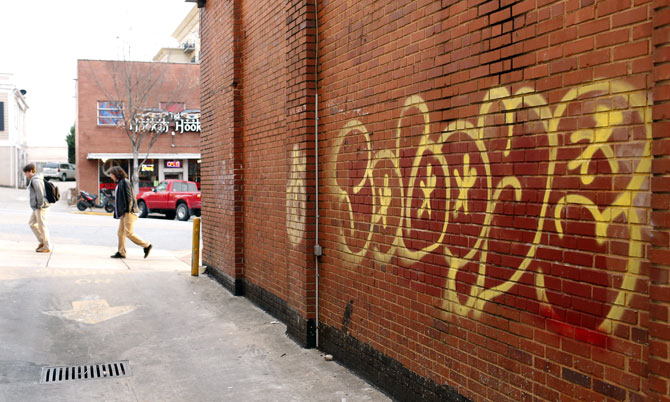 Police offered a $1,000 reward earlier this year for whoever painted this graffiti on a Clayton Street building.

John Posey, a board member of the Athens Area Arts Council, has created sanctioned and unsanctioned art throughout his life and supports street art. “Creativity should always be nurtured, not stifled,” he says. But he realizes graffiti or other unsanctioned art is not always a good medium of expression.

“Not everybody’s an artist, and when people throw up a tag, sometimes it might be offensive, or it might be filled with hate,” he says. “It might be filled with not-good things that aren’t nurturing, but there are a lot of people out there, their programming makes them want to be expressive and find that medium fascinating. Just because a few people ruin it for everyone, those people who are destined to do it may never get to follow through on their dreams.”

Other than the graffiti artist the police went after earlier this year and maybe a few other people, Posey says Athens doesn’t really have a street-art presence. He sees some benefit in graffiti art, in the sense that not all people who want to express themselves artistically have the ability or art background to get commissioned to do a mural or painting somewhere.

“When I think about graffiti stuff, I think about people that don’t necessarily have to come from an art school background, because it’s more of a quick session in the circumstances that it has to be made,” Rosenberg says. “The intention of going through and doing an unsanctioned, illegal painting is a totally different circumstance than having something that you’re allowed to work on as long as you need to in broad daylight under the sun in front of everybody. I think they take really different personality types to do those.”

Rosenberg’s response illustrates some of the differences between various types of street art. There’s public art, which is generally funded by the government or a business. Unsanctioned street art can come in several forms, from temporary installations in public spaces to spray-painted tags on walls or train cars.

Rosenberg says he prefers mural painting, because it’s usually more permanent. “I think the advantage of having something that you’re given the OK to do is that it lasts a lot longer,” he says. “People won’t paint over it. It’ll be protected a little bit. I think if Athens wants to have that kind of scene, whether it’s more public art for public consumption, then all you need is people willing to pay for it—privately, preferably.”

Local artist Lou Kregel started beautifying Athens by painting her chrysanthemums on buildings and structures in 2007. Though sometimes mistaken for it, Kregel’s art is not graffiti. She always gets permission before painting a flower on anything. Some of her mums can be seen in public, but most of them are found on private homes or fences.

Stan Mullins, a local artist, agrees that privately funding art is the way to go. Mullins’ studio on Pulaski Street is adjacent to a place with a good amount of unsanctioned street art—the area under the trestle across from the Leathers Building. About 10 years ago, someone put up a glass mosaic depicting a bird scene, Mullins says. The mosaic remains today, along with all kinds of words and images, including a large “Athens, I love you” in red letters next to a yellow sun. Mullins considers the images and words street art and not the kind of graffiti that comes with a negative connotation. Mullins thinks the bridge, owned by the CSX Railroad, has continued to attract street art without any interference because it’s off the beaten path and not visible from the main road.

Although Mullins doesn’t have a problem with the street art next to his land, he thinks artists should get permission before painting on a wall.

“It’s your responsibility to make sure what you do, especially if it’s for the public, is approved by where and whomever you’re doing it for,” he says. “The minute you go public, you’ve got to have the respect of others in mind.”

Rosenberg, who also prefers commissioned art, graduated from the University of Georgia in 2012 with a degree in drawing. Since then, he’s done commissioned art pieces here and there and recently got a job as a delivery man at Bel-Jean Copy and Print Center. He says the popularity of the St. Udio mural gave him some more work opportunities. “I’ve had a couple of offers to do other murals, but most people don’t want to pay me what I would like them to,” Rosenberg says.

While funding is sometimes an issue when it comes to commissioned art, the process for a project can also be lengthy, taking months or even years to complete.

In 2013, a committee made up of several LEAD Athens members, Athens Cultural Affairs Commission members and local business owners searched for an artist to create a mural on the side of the 40 Watt Club. Murray Weed, a committee member for the project, says the 40 Watt no longer wants the mural on their building, but the project is still moving forward. The committee took submissions from artists and selected a work that Weed describes as a house party scene in primarily blue and green colors. “We’re a mural in search of a wall,” Weed says. The committee is actively seeking walls downtown to be the home of the mural.

And sometimes, murals are not as permanent as Rosenberg likes to believe. Last summer, artistic-minded Athenians mourned when downtown property owner Corky Sams painted over a David Hale mural when the clothing store Philanthropy prepared to open up shop in the building. (Sams said at the time that the mural was deteriorating and didn’t mesh with the historic building.) 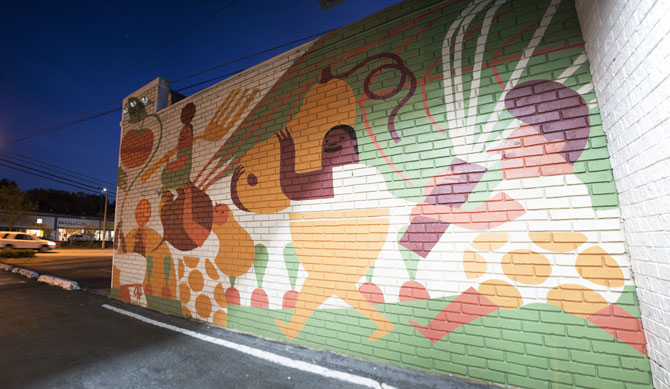 Eleanor Davis, an Athens-based illustrator, completed a mural on the side of home.made on Baxter Street last month. The mural depicts vegetables, utensils and people whom owner and chef Mimi Maumus describes as “joyful beings.” Maumus says she originally hoped to have the name of the restaurant in the mural, but a city ordinance would then consider the mural signage and not art. The same ordinance caused Creature Comforts to paint over the logo they had on the side of their building last year, but after a recent change in the law, downtown businesses are now allowed to have two signs.

Maumus says she cared more about the art and drawing attention to her business, so she omitted the restaurant name. “We wanted to have some brightness and color as people are driving down Baxter,” she says. “We wanted something that felt sort of celebratory.”

Even with the few murals Athens has or will have, the sanctioned street art scene is nothing compared to Atlanta’s Living Walls project, which has added pops of color all throughout the city by commissioning artists from around the world to paint all different styles of murals on Atlanta buildings and structures.

The Atlanta organization actually visited Athens in 2013, when it did a traveling show to various cities in Georgia and selected Little Kings Shuffle Club as a location for a mural. A Living Walls artist painted the geometric, colorful mural, which pedestrians and patrons of the club find makes a great photo backdrop.

While much of the commissioned street art found in Athens is paid for by private entities or found on privately owned buildings, there are not nearly as many publicly commissioned street art projects. There are the decorative bulldog statues visitors love and often pose for pictures near. These statues were originally commissioned in 2002 after the Athens Four Corners Women’s Club wanted to use them to raise money for charities. Some more recent projects from the Athens Cultural Affairs Commission include the painted panels on the Washington Street parking deck, and a statue and mural at the Athens-Clarke County Library. Those projects were funded by a 1 percent set-aside for public art in SPLOST 2011, the 1 percent sales tax local voters approved five years ago.

On Jan. 19, the ACAC put out a request for proposals for a public arts master planner, which may bring more public art projects to Athens.

Inspired by Atlanta artists like Evereman, Catlanta and Sad Stove, a local student and artist wants to see another kind of public art in Athens—free art. That’s why he created @magic8ball_athens, an Instagram account on which he posts pictures of magic 8 balls he’s made in varying media and mounted around town. His followers can then go find the 8 balls and take them for themselves, give them to another person or put them in a new location.

He started the account back in August, when he realized Athens didn’t really have anything like this yet. He tries to post a couple of times a week, especially on Fridays, when he uses the hashtag #fafath, for Free Art Friday Athens. 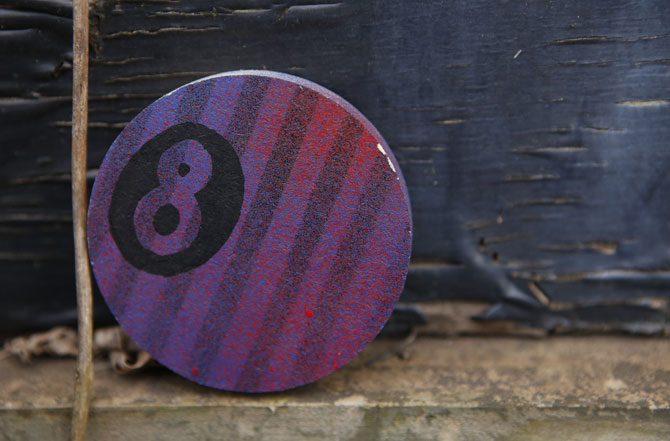 Removable installations like this magic 8 ball blur the line between graffiti and public art, as well as adding a social-media component to the work.

The man behind @magic8ball_athens wants to remain anonymous. “For me, I just feel a lot more comfortable with my name not being associated with this,” he says. “I would feel, like, a weird, distracting pressure. I don’t know, it’s just much more liberating to just be, like, ‘I did this. You probably don’t know who I am, and that’s OK with me.’”

The artist says he likes the community aspect of free art.

“I like that I can make things for strangers who don’t know who I am, and they can hopefully have an appreciation for it,” he says. “I think that in itself is enough for me.”

He’s from midtown Atlanta and appreciates all the art scenes Atlanta has, and would love to see more of that here in Athens, not just free art.

“I was in Ben’s Bikes on Broad Street, and they had these T-shirts,” he says. “One of the shirts said, ‘Athens has art.’ I was like, ‘That’s cool, and I like that,’ but at the same time, it kind of feels like it doesn’t. It kind of feels like a controversial statement, and I’m not trying to just stir things up. And I think public art is really cool and powerful and a rallying thing where everyone can be, like, ‘Oh, that mural is really cool.’ And everybody’s like, ‘Yeah, that is cool. This is a cool place.’ I think you’re missing something if you don’t have that kind of thing, especially in a place like this that prides itself on being creative and eclectic.”