What Is UGA Doing to Prevent Sexual Assaults? 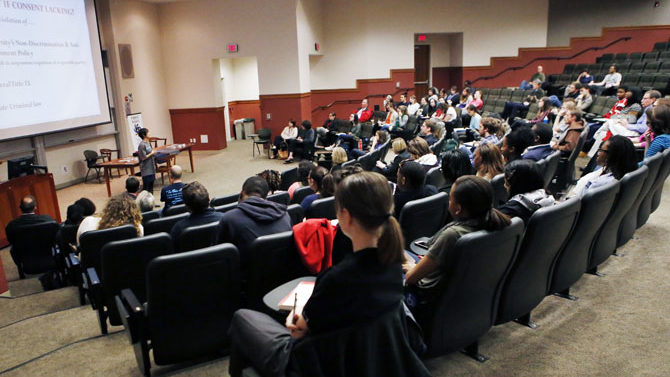 As many as one in four women will leave commencement at the University of Georgia Friday as a survivor of sexual assault.

Last April, Flagpole detailed a rape survivor’s story, relating to the larger issue of sexual assault on college campuses—places where alcohol is endemic, sexual assaults are rarely reported, and those that are reported are never prosecuted.

“Our number one goal has to be to prevent [sexual assault],” says Janyce Dawkins, director of the Equal Opportunity Office and Title IX coordinator. “And we do that by awareness, prevention-training and investigating in a fair and impartial way those when they happen and it’s appropriate to investigate. We impose penalties that reflect the individual facts of that case. Ultimately, all of that will keep our students and our community safe.”

Very few students who are accused of sexual assault face any consequences. Last year alone 83 rapes and sexual batteries were reported to campus police. As of press time, 29 sexual assaults had been reported to UGA police in 2015, according to the police department’s crime log. None of these reports resulted in an arrest.

Many of the reports are not made by the victim, but by a third party such as the EOO, the University Health Center, other UGA employees or The Cottage, the off-campus sexual assault and child advocacy center, and the victim is listed as unknown.

The difficulty gathering enough evidence to arrest or convict an accused person in criminal court, combined with the low number of victims choosing to press charges, draws attention to the student conduct investigations at colleges. In 2012, when the EOO began handling sexual assault investigations, three complaints of sexual assault were investigated, and two were found in violation. Both of these cases resulted in expulsion for the accused, according to documents obtained through an open records request. In 2013, there were six complaints, but no one was found in violation. Nine investigations at the EOO for the year 2014 yielded three violations, with two students suspended and one expelled. (Federal privacy laws protect the indentities of the students involved.).

Unlike criminal cases, where “beyond a reasonable doubt” is the standard, the investigators at EOO operate under a “preponderance of evidence,” meaning it is more likely than not that the act occurred. Dawkins says that just because a case is not found in violation does not mean the incident did not happen, but rather that there was not enough evidence to prove it did.

The Atlanta Journal-Constitution recently published a report of how the biggest universities in Georgia, including UGA, investigate sexual assault and how it ranges from university to university. The investigation found that institutes of higher learning are often trying to pick up the slack for prosecutors—a role that some fear they’re unequipped to handle and that risks unfairly punishing the falsely accused.

While UGA takes a holistic approach to prevention, intervention and investigation when appropriate to combat sexual assault, the high rate of sexual assault and low rate of punishment and accountability emphasize the need for prevention training.

“Instead of standing at the bottom of a cliff with a stretcher, we’ve got to be up at the top of the cliff trying to change what ends up being the reason people are falling off,” says Ray Manlove, co-founder of hu-MAN Up, an organization started in Pennsylvania that aims to end rape culture. University Health Center relationship and sexual violence prevention advocate Michelle Passonno says she agrees with this model. “It’s the public health’s best practices model of primary prevention,” she says.

Manlove and partner Adele Ulrich started hu-MAN Up Local College Coalition (HULCC) as a way to provide awareness and prevention workshops that focus on empathy-building to end rape culture and promote one of consent and respect. They use experiential learning, such as spoken word, art installations, billboard signs and other means to send their message of respect. The couple has mainly worked with colleges and fraternities in Pennsylvania, but they recently moved to Atlanta and plan to reach out to universities, including UGA.

Manlove and Ulrich aim to work with fraternities—even though it’s often difficult to gain access—to engage men in a conversation about rape culture. A 2007 study published in NASPA Journal found that men who join fraternities their first year of college are more likely to commit sexual assault than those who don’t. The study determined that fraternity members who participated in a rape prevention program, particularly one that focused on empathy building, such as The Men’s Program, at the beginning of the year were less likely to commit sexual assault than fraternity men who did not participate in a prevention program.

RSVP and the EOO at UGA host educational events throughout the year and often partner with other on-campus and off-campus resources for special events. A few events this semester included an open dialog on sexual consent on Mar. 2, the annual Take Back The Night event planned by the Women’s Studies Student Organization on Apr. 10 and a screening and discussion of The Hunting Ground, a documentary about the epidemic of sexual assaults on college campuses.

At all of these events, the audiences were largely female.

At Take Back the Night, Sally Sheppard, director of The Cottage, discussed rape culture. She defined it as “situations in which sexual assault, rape and general violence is ignored, trivialized, normalized or made into a joke. It’s dangerous in that it’s counterproductive to eliminating sexual violence from our society.”

She asked for examples of rape culture from the audience. After several hands shot up and attendees provided examples, Sheppard wrapped up her discussion by saying, “I hope that you are more likely to believe in [rape culture’s] existence, and I feel like I’m preaching to the choir a little bit here.”

RSVP employees are available upon request to visit classes, residence halls or student organizations to give training sessions on topics like consent and bystander intervention as well as other classes related to healthy relationships. Not all UGA students will take advantage of those resources, though.

Even with all of the prevention and intervention UGA offers, Lauren Pruitt, a senior women’s studies major, thinks UGA lags behind by not offering a physical space for a women’s center, which would serve as a central location for resources and services specific to women. Pruitt, along with other women’s studies students in her senior seminar class, set up a pop-up women’s center in Tate Plaza in March to emphasize the need for a physical location. Georgia Tech, Emory and Georgia State all have women’s centers.

“We think a women’s center is really the first big step in improving campus climate for women,” Pruitt says. She says a women’s center could help victims of sexual assault have a specific place where resources might be more visible and accessible.

UGA has taken a step in terms of mandatory prevention by starting to require all first-year and transfer students under the age of 23 to complete a course called Haven: Understanding Sexual Assault. It is similar to the AlcoholEdu course students take to learn about risks of alcohol. Haven will address critical issues of sexual assault, such as consent and bystander intervention topics, as well as relationship violence and stalking.

“We do that right when they come in because we want them to have some sort of baseline knowledge about what’s OK, what’s not OK, what are we expecting of UGA students coming in and what the resources are if something happens,” says Deanna Walters, the primary advocate at RSVP.

While one course certainly can’t eradicate rape culture and the risk of sexual assault, it serves as one step in adding as much prevention to the university as possible. Dawkins says resources and sexual assault prevention efforts have to be constantly reviewed. “I’m never satisfied that we’re done,” she says. “We’re constantly looking for ways to improve.”