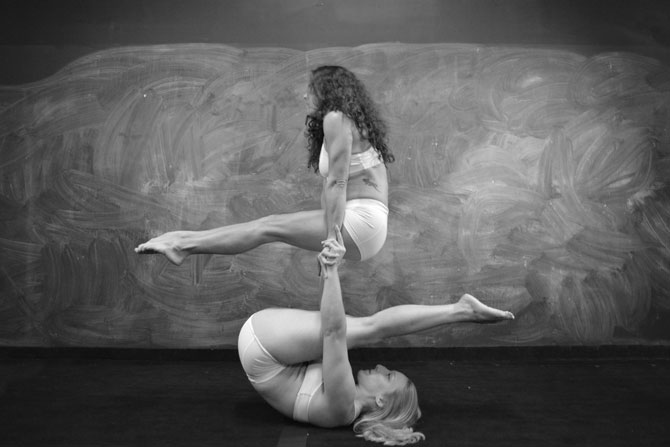 If you’ve ever wanted to learn to do a handstand on someone else’s hands, Acro Athens is where to start training. Acro Athens opened in October of last year as a yoga studio dedicated to bringing ground partner acrobatics—commonly called acro-yoga—to the Athens community.

Juli Bierwirth and Michael Black decided to open the studio after they had both been practicing acro-yoga and taking classes at other yoga studios in Athens. “We both said we kind of had the same goals as far as where we wanted to see the acro practice in Athens go,” Bierwirth says.

Acro-yoga started in Montreal, Bierwirth says, as a way for people to get into acrobatics, since there’s a strong circus presence there. “Acro-yoga starts them out really slowly and gets them to build trust and communication between partners, developing body awareness, flexibility and strength,” she says. “As the practice progresses, it starts to kind of move toward partner acrobatics. As people get better, it tends to become more circus-y.”

It’s not as hard as it looks, Bierwirth says. “For people timid or skeptical, it’s a really low barrier of entry. There’s a place for literally everybody—every body type, every level of strength or flexibility. Everyone has something they’re going to excel at, because it’s a really broad type of practice.”

I think it’s just really fun to see people have that moment where they realize that something that looks really impossible is completely within their grasp.

She recommends coming with a friend for your first class, but it’s not a requirement. She says a person’s first class is more likely to feel silly than scary.

Willow Tracy, 40, one of the volunteer instructors at Acro Athens, says her favorite part is watching people accomplish things they didn’t know they could.

“I think it’s just really fun to see people have that moment where they realize that something that looks really impossible is completely within their grasp,” Tracy says. “I especially love that when it’s people who haven’t historically thought of themselves as athletic or graceful or able to do these things that would involve balance.”

In addition to the benefits of strength, flexibility, balance and body awareness, Bierwirth says acro-yoga is a great form of exercise that allows you to make friends and interact with others in a way you wouldn’t normally.

“It’s also just a kind of play that you don’t really get in much of adulthood,” she says. “You don’t really fall on people or laugh with them like you do in acro-yoga. I think it takes people back to their childhoods and gets them excited about being playful with their friends.”

The studio, located in the Chase Street Warehouses, offers classes as well as open gym times. Classes include acro-yoga, hand balancing, flexibility and conditioning. A calendar and rates are posted at acroathens.com.

All of the money from membership fees goes toward keeping the lights on and buying new equipment for the studio, Bierwirth says. All of the instructors, including Bierwirth, who is pursuing a PhD in food science from the University of Georgia, volunteer their time to teach. Although they haven’t filed officially to be a nonprofit yet, Bierwirth says they run it like one.

Coming up in April, Acro Athens will host the Southeast Acro Yoga Creative Immersion. They’ll bring in other acro-yoga instructors from Montreal, Washington, DC and New Orleans. Slack-lining and handstand training will also be available at the event, which takes place Apr. 24-26.

“It’ll be the first time we’ve had this many instructors in one event,” Bierwirth says. “We’re pretty excited to be able to offer it.”