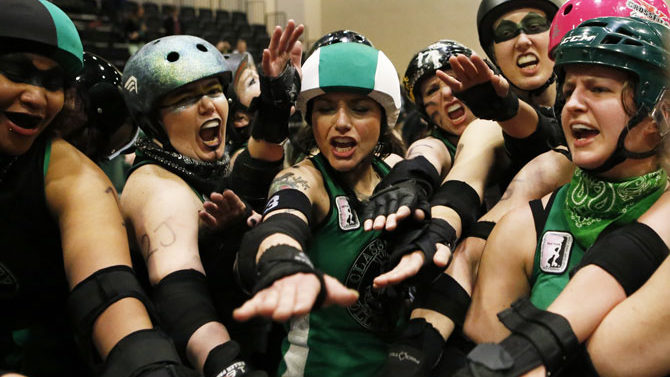 The Classic City Rollergirls open their 10th competitive season of women’s flat track roller derby Saturday, Feb. 14 at the Classic Center, against South Carolina’s Greenville Derby Dames. Those in attendance two weeks ago for the Green vs. Black intrasquad exhibition scrimmage witnessed a thrilling contest that went down to the wire and left fans optimistic about the 2015 season.

There had been concern among followers that, due to key personnel losses, momentum gained after a fruitful 2014 season—during which CCRG climbed several spots on the international WFTDA rankings and scored impressive victories against Atlanta’s Jukes of Hazzard (at home) and Huntsville’s Dixie Derby Girls (on the road)—would vanish.

“We lost some really amazing, talented and passionate skaters. Human Missile Crisis, High Jinxxx and AmyTville are ladies we all loved playing with, and it’s impossible to replace them, but I think we’re confident reloading. We’re familiar with it. There are athletes on this team ready to skate,” says CCRG captain Louis Strongarm.

With strong leadership in place, Classic City isn’t going to panic. There are too many seasoned skaters up and down the roster—particularly on the defensive end, with the steady blocking presence of Tenderize Her and accomplished pivot play of co-captain and multiple season MVP-award winner Elizabeth Impaler—to forecast a letdown.

And there is emerging talent in the cupboard, especially at the scoring position, where the team has plenty of depth and may choose to implement a jammer-by-committee approach with skaters like BadAsh Booher, Lady Voldehurt, Kru$ha and BonEva sharing the workload. Almost every member of the roster can play the position effectively; a clear rotation, like the popular Crisis/Jinxxx/Strongarm triumvirate so frequently used last season, hasn’t been established yet.

The most important play in roller derby is the Power Jam, which occurs when a team has temporarily lost its scorer (the jammer) to penalty. Penalties can play a crucial role in any sport, but when a jammer spends time in the box, the results can be especially devastating for the shorthanded team. If CCRG takes advantage of their Power Jam opportunities and avoids penalties, they can compete with anyone on their schedule.

The skaters have even more ambitious goals. “In the not-so-distant future, we’d like to become a Division II team,” says Strongarm. “We have to win a ton of bouts, but I think that’s why we play derby in the first place.”

The 2015 schedule is peppered with bouts against teams ranked just ahead of Classic City, so it’s safe to assume another winning season will lead to a continued ascent in the rankings. Winning by a significant point spread would mean an even faster climb, due to WFTDA’s complex and evolving rankings algorithm, which rewards teams for margin of victory. (Yes, style points count.)

The team also needs a clear home-track advantage, so remember: Bouts are conveniently located downtown. They start early, at 7 p.m. There are reasonably priced macro- and microbrews available. If you need yet another reason to support these dedicated women, then consider the good work they do off the track.

“I’m so proud to be part of a team that focuses on community outreach,” says veteran player Cirque du Slay. “We normally volunteer somewhere around the community once a month, and 10 percent of our profits from each home bout are donated to a charity.”

Most recently, CCRG participated in the MLK Day of Service. The list of nonprofit organizations that benefit from the team’s philanthropy includes the Athens Community Council on Aging, Children First, Nuçi’s Space and The Cottage.

And if any women reading want to extend their support beyond the limit of fandom, there’s opportunity there, too. “We have a bootcamp coming up on Sunday Feb. 22,” says du Slay. “If you’ve come to a bout and thought what we do looks fun, we want to have you.”