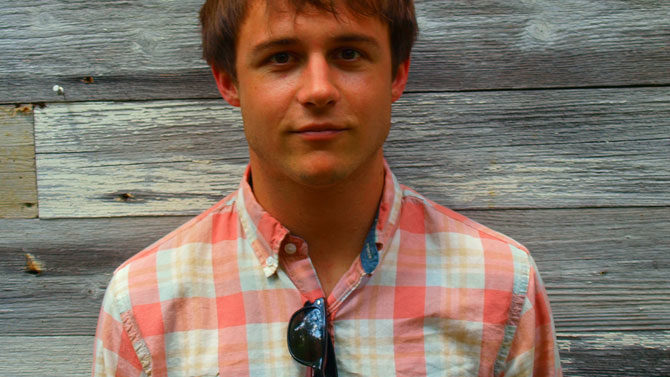 “Call me Ishmael.” It’s the first sentence of Herman Melville’s classic novel Moby Dick, and one of the most famous lines in literature. It’s also the name of a project created for bibliophiles to share how books affect their lives.

Created by Athens native Logan Smalley and three other people, Call Me Ishmael allows readers to call 774-325-0503 and leave a voicemail describing an experience they’ve had from reading a book.

“I’ve been obsessed with the first sentences of books for as long as I can remember,” Smalley says. “I just find it a really fascinating thing to think about. Authors spend so much time pouring their creativity into the pages of a book, and then, inevitably, they’re faced with, ‘What is the first thing that my potential reader will see?’ So I love to see how every book tackles that conundrum.  And of course, ‘Call me Ishmael’ is one of the most famous examples.”

Smalley and some of the other team members take turns listening to the voicemails, transcribing three voicemails per week on a typewriter and producing a video that they post on their website, sharing the caller’s experience with the Internet.

“It’s a really fun project, because it’s sort of this look at technologies gone by, right?” Smalley says. “So the concept of an answering machine, a telephone as opposed to a cell phone, a 150-year-old book and a typewriter. We’re using each of those mediums through more modern mediums like YouTube and social media.”

After launching last summer, the team has added new components to the website, such as a store section with Call Me Ishmael merchandise, including Calling Cards. Calling Cards look like business cards with the Call Me Ishmael logo. On the back of the card is callmeishmael.com/card/_________. In the blank space, the card owner can write words such as “storyteller,” “library,” “bookstore” or “inspire-me” to send the receiver of the card to a unique URL that will tell them about Call Me Ishmael. Card owners can directly give them to someone, or they can hide their cards in books in bookstores or libraries for a more serendipitous way to spread the word.

Smalley considers Call Me Ishmael a passion project and is very happy with the way it’s been received by everyday bibliophiles and even by famous authors. On July 31, about a month after the launch, John Green, the author of the best-selling novel and the movie The Fault in Our Stars, asked his more than 3 million Twitter followers to listen to Call Me Ishmael’s Harry Potter Day playlist in honor of J.K. Rowling and Harry Potter’s birthdays. “We were just like, ‘Holy cow,’” Smalley says. “It was such a pleasure to see booklovers align behind this novel way of telling stories about stories. Since then, we’ve had thousands of calls.”

Call Me Ishmael is not Smalley’s only creative project. While still in college at the University of Georgia, where he majored in education, he and some friends made the documentary Darius Goes West, which celebrated its 10th anniversary last summer. The Darius Goes West organization has raised more than $2.5 million for research on Duchenne Muscular Dystrophy, which Darius Weems, the subject of the documentary, suffers from. On Dec. 1, Netflix picked up Darius Goes West. Smalley said this year’s goal is for the crew to record commentary on the making of Darius Goes West so people can listen to it when they watch the film.

Darius Goes West–related events often bring Smalley back to his hometown of Athens from New York, where he currently works as the director of Ted-Ed, an organization that brings the popular online Ted Talks lectures to college campuses. “In a way, I have the good fortune of visiting Athens so often and it’s such a big part of what I think of as my identity that in some ways, it feels like I never left,” Smalley says. “I do live in New York right now, but it’s cold in the winter, and the first place I go to get away from that is Athens, GA.”