The Great Gatsby If you could party like you’re in a play, The Great Gatsby might be near the top of your list. It’s a show, running Nov. 6–16, loaded with all the expectations of Roaring Twenties glam and infamous characters from F. Scott Fitzgerald’s Great American Novel. University Theatre is promising to deliver all that and more, plus a chance to party like you’re in the show on Nov. 7. Some of the “more” is a risky option for the back half of the audience to receive silent texts and tweets during the show, but never fear: If you hate that idea, you can opt to sit in the front, where it’s all behind you.

Before we get to the party, the basics of the play and the players: the story is Nick Carraway’s memory of time spent socializing above his means, but not above his pedigree, among the rich and lively on Long Island during the Roaring Twenties. Gil Eplan Frankel, who has demonstrated a great combination of intellect and presence onstage, is a great choice for Carraway. His neighbor is the mysterious millionaire Jay Gatsby, host of the best parties in town. Jeofry Wages sacrificed his long, flowing locks for the role and instantly looked the perfect Gatsby—with that hint of vulnerability to augment the character’s charm. Gatsby is pining for Carraway’s aristocratic—and already married—cousin Daisy, played by Emerald Toller, who played a delightful Elizabeth Bennett in the hit Pride and Prejudice last November. She has a look that seems to belong in another time or in a famous portrait in a museum—but she also has the solid acting chops to prove she’s not just another pretty face. Add Brooke Owens’ witty charm as friend Jordan Baker, Amy Levin’s amazing versatility as Meyer Wolfshiem and Sean Smith’s ability to add dimension to the boorish jock, Tom Buchanan, plus new talent Brooke Pulaski as Myrtle Wilson and Marquee Ivory as George Wilson, along with a strong ensemble, and you have a group of characters you can’t wait to meet. 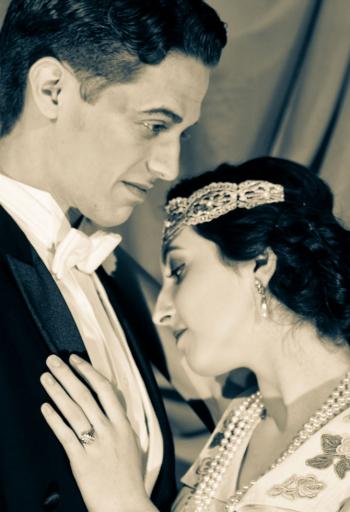 Jeofry Wages as Jay Gatsby and Emerald Toller as Daisy Buchanan in The Great Gatsby.

You might also be excited about the costumes and set, since this show and the space (the big, historic, Fine Arts Theatre) call for over-the-top design. Director/professor T. Anthony Marotta is excited about the stage adaptation by Simon Levy. “It’s a very theatricalized telling of a large novel,” he says, “really adapted to the medium we’re telling it in.” He also has a lot of praise of his design team for rising to the challenge: Michelle Gersten (set), Jordan Jaked (costumes), Sean Saari (lights) and John Kundert-Gibbs (sound). The costumes, which move from misty shades to vivid color as Carraway’s memories become more vibrant, are backed up with meticulous research on the time period. The set includes a grand staircase that lights up; Marotta notes with enthusiasm: “It’s very Follies—the stairs light up individually!” He adds, “This production is as close as you can get to a musical, without it’s being a musical: grand costumes and set, with four big dance scenes.” The cast has had particular fun working on those dance scenes, he says, and, “You see them dance, and you want to get up there and dance with them.”

The audience for the Friday, Nov. 7 performance will have the opportunity to do just that at a free “Party With Gatsby” after the show: You get a live jazz combo and vocal group, dancing (the UGA Ballroom Performance Group will show off a bit on the dance floor) and hors d’oeuvres by Speakeasy. Perno’s Formalwear has a Gatsby tux rental special for the night, since attendees are encouraged to wear formal or cocktail attire.

There’s an unexpected part of the production of The Great Gatsby that brings the audience from the Twenties into the present in a surprising and risky way: The back half of the audience is not just allowed but invited to keep their cell phones on (but silent) during the performance to receive occasional supplemental material via text and tweet. However, those who abhor the very idea are promised a technology-free seating area in the first several rows. At the very least, everyone should check out the at-times hilarious @GatsbyUGA tweets leading up to the show. It will be interesting to learn what the supplemental texts can add to a play so clearly rooted in a particular era.

“It’s part of the glitz,” Marotta says. He expresses hopes that this will not be an annoyance for those who hate phones in theaters, since this will be going on behind them, but he adds, “if we’ve got 10 more people who want to come to the theater more often because it’s more relevant to them, then we want to do that.”

Working on a shoestring budget with an all-UGA student team, they hope to bring these potentially tech-heavy horror tales to the stage through inventive designers. Angel Borden (set), brings her scenic painting skills and is also using reclaimed materials to build the set, which, according to Olhausen, “is great, because part of our concept is the natural overtaking the man-made.” Kayla Edwards is doing makeup, working closely with Arleshea Wright on costumes and Amy Levin, who the directors call their “mistress of gore and sound.” They’re fortunate also to have Will Pieper, the mastermind behind the amazing lighting design of Town and Gown Players’ Rent. Olhausen says, “He’s come up a lot of ways to create depth and illusions with light that also saves money on paint.”

Olhausen and Abbott hope the wider Athens community will come to see more student shows at UGA, since these productions showcase what undergraduates can do on their own.

Abbott says that he and Olhausen hope to take these classic, sometimes campy horror creatures into the present, “to reinvent them and put the fear back in them.” It’s not a scary thriller play, however, Olhausen warns. “It doesn’t cause that kind of pop-up scare. It’s more about the ideas behind these stories and the questions about humanity: What makes a man a monster? What is salvation, who deserves it, can you earn it.” Abbott adds, “It’s more about the monsters we create in our heads.”

The Last Night of Ballyhoo It’s a rare opportunity to hear a reading of a Tony Award-winning play while the playwright is also in attendance as the guest of honor at his own party: UGA Department of Theatre and Film Studies is presenting a staged reading of The Last Night of Ballyhoo, by Tony/Academy/Pulitzer-winning playwright Alfred Uhry at 7 p.m. on Sunday, Nov. 9, in the auditorium of the Richard B. Russell Building Special Collections Libraries during Spotlight on the Arts. Best known for Driving Miss Daisy, Uhry is being inducted into the Georgia Writers Hall of Fame and will participate in a panel discussion after the reading.

The Last Night of Ballyhoo portrays a German Jewish family living in Atlanta “and how they struggle to perform both American Southern identity and Jewish identity” according to director John P. Bray (who teaches dramatic writing at UGA, heads up the Athens Playwrights’ Workshop and Rose of Athens’ No Shame Playreading Series and was just in the director’s chair for Town and Gown’s smash hit Rent).

The play is set on the night before Gone With The Wind opens in 1939. “At this time,” Bray says, “Hitler has invaded Poland, and so he foregrounds questions of how do we create community, how do we keep our cultural heritage while performing a new cultural heritage, so they’re very rich questions.”

The cast includes UGA Theatre and Film Studies professors George Contini and Kristin Kundert-Gibbs, PhD theatre student (and producing artistic director of Circle Ensemble Theatre) Joelle Re’ Arp-Dunham, and UGA theatre majors Amy Levin, Gil Eplan-Frankel, Julianne Whitehead and Sean Smith. Levin, Eplan-Frankel, and Smith are all in The Great Gatsby, and Whitehead is also in the Thalian Blackfriars production Fright Night, so, clearly, they’ve had a challenge finding rehearsal time. Bray noted they are doing much of the character work on their own; no one has to memorize lines or blocking, and some of the actors are meeting and reading scenes together and doing intense study of the script, since they have similar gaps in their schedules.

The fact that the playwright himself will be there is, in Bray’s opinion, both the reason to come see the performance and “the nerve-wracking aspect for me; we’re reading this not just for the public but for Uhry himself.”

The Last Night of Ballyhoo (reading), by Alfred Uhry, Richard B. Russell Building Special Collections Libraries auditorium, Nov. 9 at 7 p.m. Free, but registration is requested at gail.uga.edu/events/libs/gwhof-2014, lnessel@uga.edu or 706-542-3879.