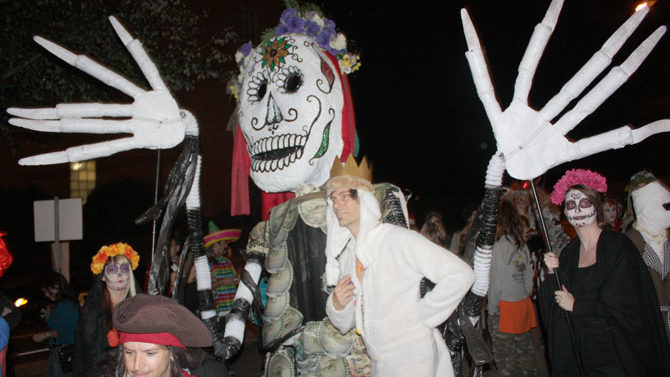 New Orleans has its Mardi Gras. Savannah and Boston their St. Patrick’s Day. And even little Punxatawney, PA’s got its Groundhog Day. Some cities are lucky like that, to have days of revelry so tied in to their heritage and identity and reputation that they’re like hand in glove.

But Athens? Well, there are game days, sure, and music days, but maybe Halloween should be ours. As far as downtown goes, there’s nothing more communal, weirder, more fun and more representative of the Never Never Land of safe anarchy that Athens usually is.

Downtown Athens at Halloween has always been a real delight, with grown folks roaming the streets in costume, pinballing from bar to dance party to cover band to bar. But it’s also been a free-for-all, a shapeless beast that comes in the night and leaves you with a hangover. For the past five years, though, the Wild Rumpus Parade & Spectacle has succeeded, if not in corralling Athens at Halloween, then giving it a centerpiece, a sun (or black hole) around which to orbit.

“Athens has always been crazy fun on Halloween,” says organizer, ringleader and parade chief Timi Conley, “especially over the past decade, so I think nobody thought there was a need for it.” But what started out as a small idea five years ago has exploded into an annual event involving thousands of participants and bystanders.

Conley says he threw around the idea of a parade the first year, created a Facebook invitation that received little feedback, and almost didn’t show up to his own event, because it was a chilly, rainy evening on Halloween 2009. He’s glad he did. Within half an hour of the posted meeting time, 300 people had gathered and a tradition had got its start.

Conley—who says he loved his mother’s homemade Halloween costumes when he was a kid in Tennessee and admits to being something of “a little vandal”—is amazed and delighted by the success of his idea.

A lot of things get started in Athens with the intent of creating a lasting tradition but only make it a handful of years (or less) before fizzling due to the die-off of interest, or of the founders’ energy and more. But the Rumpus shows no sign of slowing down at the half-decade mark. Though Conley has lived in Athens for more than two decades and played music in numerous bands, like Kite to the Moon and the Fuzzy Sprouts, Wild Rumpus is his biggest and most likely lasting contribution to the city’s cultural life.

This year’s parade may be its biggest and wildest yet, as University of Georgia students will be in town—the weekend closest to Halloween usually coincides with the annual Georgia-Florida football game, an out-of-town tradition, but this is a rare year without overlap.

The Rumpus is a growing thing, and it’s become more than just a parade, though it very much is that, with costumed individuals, organized groups, a drum crew leading the whole thing and Conley at the head dressed like the character Max from Where the Wild Things Are (the children’s book from which the Rumpus derives its name), leading Athens’ unruly beasts.

The 7 p.m. gathering point is the parking lot at the southeast corner of Pulaski and Clayton Streets, in front of the Caledonia Lounge and Hot Breath Glass Studio. The throng leaves at 7:30 p.m., heads up the Clayton Street hill towards the heart of downtown, swings left at College Avenue and then left again on Washington Street towards its terminus at Pulaski, in front of the 40 Watt Club, where there will be an outdoor stage with live music from 8–9 p.m.

Earlier in the day, there’s Wild Rumpus Kids-and-Family Monster Mash at the 40 Watt from 2 p.m. to 4 p.m., with face painting, musical and dance performances, mask and noisemaker creation stations and more. Following the parade, the 40 Watt also hosts a show featuring local bands Space Trucks, Timi & Kite to the Moon and Ghost Owl.

The Rumpus operates also as a fundraising engine; last year, $1,000 went to the Athens Area Humane Society, and contributions this year—which can be made at wildrumpus.org—will go to Nuçi’s Space.
The Rumpus also seems to bring out families and folks who might not normally venture downtown on a Saturday night.

“Yeah, I just love that,” says Conley. “Though, of course there’s part of me that wishes the spectators were in costume and getting in the parade, but some people just love to watch! It’s just a huge energy generator. But just put on a costume and show up, design a float, put your energy into that, form a brigade, whatever! I’m thrilled that Athens has embraced it.”

WHAT: Wild Rumpus Halloween Parade V
WHERE: Downtown Athens
WHEN: Saturday, Oct. 26, 7:30 p.m.
HOW MUCH: FREE!