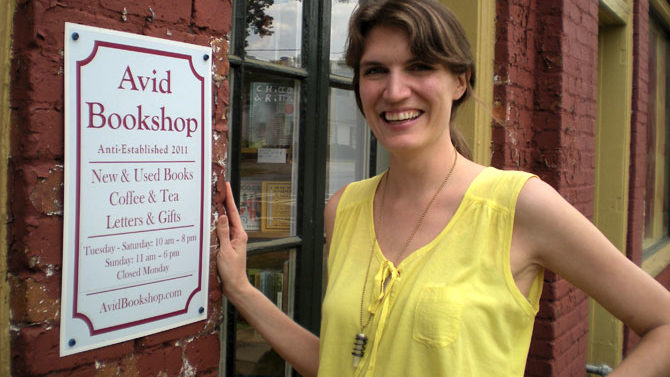 You know those charming little independent bookshops you only see in movies starring Meg Ryan? Where the bookseller knows every book because she put it there? And thereâ€™s a story time for the kids? And you just want to be there even if youâ€™re not going to buy a book because itâ€™s so relaxing? Athens has one of those. Itâ€™s called Avid Bookshop; itâ€™s on that little triangle where Prince Avenue meets Hill Street, and the Meg Ryan character is named Janet Geddis.

At least, thatâ€™s the impression the store gave me. I stopped in one afternoon to ask Geddis for charming stories about her customers to see if my theory held up. Before she could answerâ€”I am not making this upâ€”into the store walked a guy holding a fiddle case, who said he was on his way to the Globe for the Irish music session.

â€œThought Iâ€™d stop for a minute, rest up, and enjoy the ambiance,â€ said Joe Willey, a local musician whoâ€™d ridden over on his bike. â€œI can play you some fiddle, if youâ€™d like.â€

So, he played a few numbers on his great-grandfatherâ€™s fiddle, told us whatâ€™s involved in the care of a fiddle, and encouraged us to come to the Globe, before pedaling away on his bike.

A little later, two young women walked into the storeâ€”one because she wanted a specific book in her hands that evening, and the other because she finds Avid a â€œrelaxing place with a good vibe.â€ Thatâ€™s the reason Geddis opened Avid Bookshop.

â€œI wanted Avid to serve as an informal community hub, a place where someone can stop for directions, or a cup of coffee, or that cool new book he just heard about on NPR,â€ says Geddis.

The neighborhood has embraced her bookshop to the point that customers drop by with cupcakes, cookies, drinks and more.

â€œLaurel Rudolph, a local seamstress with her own company, has been an Avid customer since the days when we only sold online,â€ says Geddis. â€œLast year, we got a kitten named Wally at home, and I documented Wally’s adventures as she tried to audition for the role of bookstore cat. There was Wally at the keyboard in the home office; there she was walking all over the copy machine and making copies of nothing in very high quantities. Laurel followed Wally’s antics but knew that our little kitten wouldnâ€™t be the bookstore cat any time soon. So, she brought a handmade cat for the store named Chessie so I could have a cat in the store to keep me company. Chessie lives on a perch next to the Book Balloon now. It’s extra-touching now because our kitten passed away in December, so itâ€™s comforting to have at least a pretend bookstore cat to say hello to,â€ she adds.

The Book Balloon next to Chessie is a reading nook where younger readers can sit in the â€œbasketâ€ under a fantastic, fabric-mosaic hot-air balloon designed and created by local artist Krysia Haag. Thereâ€™s even a lamp behind the cloth so the balloon is bright and cheerful on cloudy days.

To add to the relaxing atmosphere, the ironing board table and stools on the Prince Avenue sidewalk give customers a place to enjoy beverages and conversation in the fresh air. Avid serves cold drinks, hot teas and raspberry hot chocolate that a customer donated because, according to Geddis, â€œsheâ€™d bought a stockpile of it when her son was drinking it, and then he decided he didnâ€™t want it anymore. So, she shared it with us.â€

The Avid admirers arenâ€™t just customers. â€œWe have a really great relationship with the Daily Co-op and share resources and such pretty frequently,â€ says Geddis. â€œThe other day, one of the managers came over to replace some register tape he’d gotten from us the day before and left some chocolate as a little thank-you treat.â€

Geddis is the first to say she didnâ€™t make the store a success on her own. The Avid team also includes booksellers Tom Eisenbraun and James Wilson, and PR and events coordinator Rachel Watkins. They all chip in with their additional skills and enthusiasm, from writing staff picks to doing computer work to reading to the children at story time.

Local authors also add their own speciality to the store. Avid enjoyed one especially charming impromptu reading when Gretchen Elsner dropped by the store and showed some out-of-towners her pop-up book at Geddisâ€™ request. When the children asked, â€œWill you read it to us?â€ she said, “Of course,” and read the entire story while the boys sat, fascinated.

Geddis didnâ€™t go into the indie book business lightly. She attended bookselling conferences and publishing industry meetings, and traveled to countless bookstores. She also receives support from other independent booksellers, including Jackson Street Books, Georgia’s oldest antiquarian bookshop, which opened in Athens in 1984.

â€œBefore I formally announced my intentions to open a bookshop in town, I reached out to Tony and Jen at Jackson Street Books downtown. They welcomed me graciously into their shop, and we talked about my goals for Avid, how we thought we could work together,â€ says Geddis. â€œWe refer customers to each otherâ€™s shops frequently and I think our approaches to business and very different collections complement each other very well.â€

Of course, the heart of Avid is the books, and Geddisâ€”a self-proclaimed â€œbook nerdâ€ who moved to Athens for grad school in 2004 and earned her M.Ed. with a focus on gifted and creative educationâ€”happily goes the extra mile to put books in the hands of any readers, even if it means sending customers elsewhere.

Like the stressed-out grandmother who needed a book that her visiting granddaughter needed for school. Barnes & Noble had referred her to Avid, and, Geddis, who also didnâ€™t have it in stock, looked it up on the Athens-Clarke County Library website and told her they had two copies she could check out. The grandmother was â€œhappily surprisedâ€ with the booksellerâ€”like the Macyâ€™s customer with Kris Kringle in A Miracle on 34th Street.

â€œI believed that focusing on what I lovedâ€”interacting with people and connecting them with meaningful booksâ€”would lead to business success,â€ says Geddis. â€œIâ€™m happy to say that our customer-centered approach is paying off well and that Avidâ€™s philosophy is resulting in a really great community feel for the bookstore and sales figures to match.â€

In the wake of the store’s six-month anniversary celebration last Saturday, Geddis is planning to add another bookseller and four interns to the Avid family. She also plans to continue to expand their offerings and connections, emphasizing â€œbook-centered aspects of everythingâ€ from executive lunch groups to baby-shower registries.

Avid already acts as an onsite bookseller for events and has partnered with a number of organizations and businesses, including various UGA departments, Fall Line Press, the Georgia Museum of Art, the Classic Center, Clarke County Schools, Reynolds Plantation, Rose of Athens Theatre and La Leche League of Athens.

This Saturday the bookshop will host an Athens Storytelling event (for grownups), with local talent telling true storiesâ€”in seven minutes. An especially promising afternoon of fun follows Sunday when Avid teams with Boulevard Animal Hospital to present a dog-friendly party in honor of the book Things Your Dog Doesn’t Want You to Know, complete with a â€œcanine confections partyâ€ and treats. Publisher Sourcebooks is donating $1 from every book purchased at this event to Athens Canine Rescue. Well-behaved dogs on leashes are welcome to attend with their owners.

At the end of my afternoon in the shop, a young man walked in with a friend from New York. He said Avid was on their Athens tour because â€œshowing people whatâ€™s nice about Athens is totally on the list.â€ Then they took their tea outside to sit at the ironing board and chat. And Avid lived happily ever after.