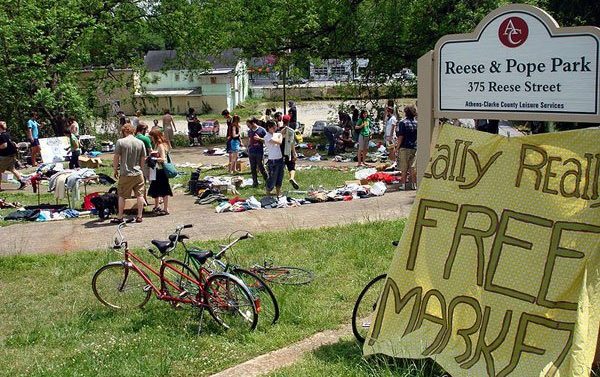 The Internets have been rife with the ambivalent handwringing of liberals over the occupation of Wall Street. The plaint is very nearly the same across all fervent typing hands: Yes, those kids have a point, but why do they have to make it with drum circles? The short answer to all the skeptical skewering of Occupy Wall Street is that participatory democracy is experiencing a strange and messy rebirth. If it doesn’t look like a focus-grouped, pinhole-narrow media blitz, complete with succinct soundbites, that’s just because it isn’t one, and bully for that. It’s a legitimately ground-up phenomenon, and something people who are legitimately on the ground don’t have is money. So, quit complaining that it doesn’t look pretty!

That said, while a solidarity-specific Occupy Athens rally is being planned as we go to press, another perhaps more demonstrative and utilitarian measure is underway: the Really Really Free Market. The idea is at once simple and subtly subversive: bring to market whatever you don’t need and leave with whatever you want. No bartering, no trades, no currency. The wonky randomization of value spits in the face of our economic system with impunity.

“In capitalism, a few people, the big players, are on the top, and their decisions go back to benefiting them,” says co-organizer KT Austin. “And other people have to suffer by things not being available or affordable, and it’s really destructive in that way. So, [with] the Really Really Free Market, you come with stuff that you might not need anymore that other people might need, and it works out for everyone. It’s really great for building a community, especially in small towns like Athens.”

There will be free food provided by Food Not Bombs, bike repair, haircuts and plenty of other goods and services free for the taking, with the assumption that you might bring along anything that might help someone else out—or not. And while the plan is to make these events monthly, the timeliness of this one is not lost on Austin and her cohorts: “The Wall Street protest is about the fucking corporate greed of the financial district, and the Really Really Free market is direct action against that—even if it’s just for a day.”