Interfacing: Exploring the Human Body and its Entanglements 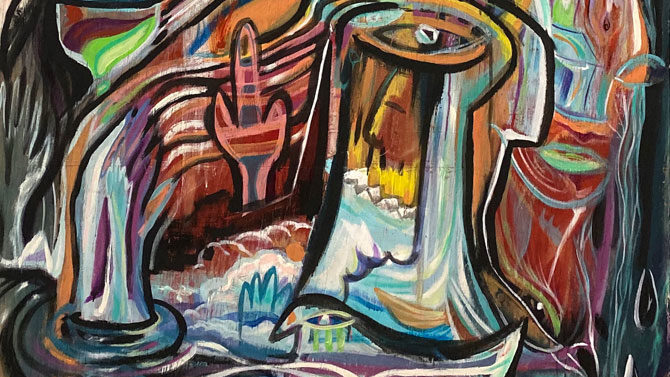 The Lamar Dodd School of Art opened four new exhibitions last week that each touch on narratives of the body and its interface with the earth.

In the Lupin Gallery on the third floor of LDSOA is “The 2020 University of Georgia and Augusta University Student Science and Medical Illustration Juried Exhibition.” Viewers can see the process of the students work through sketches and on-paper works tacked to the left entry wall of the gallery, followed by displays of visceral work that range from practice journal covers to text book inserts to delightful 3D printed objects. As one walks through the gallery, they can see the mastery behind medical curriculums’ illustrations—the visual language that heightens leading knowledge about the human body and its interfacing with medical tools, epidemics, new medical concepts and more. Each piece is titled with the class prompt whence the image came: “Tearing an Orange” by UGA artist Delaney Maxwell bears the description “to depict anatomically accurate hands in action, interacting with an external object.” “Link Between Vascular Disorders and Alzheimer’s Disease” by Keri Jone was created to “to metaphorically depict the relationship of Alzheimer’s and vascular disorders discussed in an article featured in Neurobiology of Aging,” featuring images of veins and capillaries coloristically in dialogue with text-based elements.

Viewers can continue considering the internal working of their bodies if they walk across the third floor hallway to the Suite Gallery, with LDSOA’s current post-MFA photography fellow Amiko Li’s show “The Purpose of Disease.” A collection of photos combined with sculpture items are in dialogue with a video performance piece Playing Sick in which differently-aged persons were asked to act out disease or illness. The photos create a narrative about Li’s travel to the U.S. and the experience of his disease. Some photos are literal: an image of the artist lying on his stomach, his back and arms covered in a pink rash. Other photos are grotesque and uncanny: “A cut on your left hand, A cut on your right hand” features two lab mice with human ear-like extrusions. By exploring the purpose of disease, Li reaches an expanded definition of disease, more than just a virus. Li includes the idea of the immigrant in the U.S., since he hails from Shanghai and has become increasingly aware of linguistic, political and social boundaries that have created distance and isolation as if one is diseased. The sculptural elements include an anatomically correct plastic bust and ear that one might find in a doctor’s office in Shanghai, including Chinese symbols. Mirrors bear vinyl sentences like “there is no pain that is specially prepared for you” or short, poetic snippets that weave dream-like narratives with comments about disease, adaptability and the human body.

The mood shifts as one enters the Bridge Gallery where the work of LDSOA MFA candidate Kelsey Wishik weaves a narrative about non-human and human bodies in the show “Elements of Myth: Kesey Wishik.” In the middle of the gallery, a trunk-like floor-to-ceiling sculpture of gathered wood and sticks, winds up to anchor the show in organic material built at a scale meant to create a confrontation that brings the viewer into “shared intrigue.” Working with the elements of earth, water, fire, air and ether, the show features sculptures that combine steel, wood, paint and grasses to construct myth within a space. Wishik understands myth as a “device used to explain a phenomenal event.” She goes on to say “…I’m considering the five elements as the building blocks for cultural myths across the globe…as our communities are interdependent upon the environment[s] that cultivate us…” One can see fire-welded steel components, bolstering or embedded within organic material, such as Wishik’s piece “Annamaya,” an object that is built on the concept of yogic Koshas, or differently-dimensioned existence. Pieces titled “Original Ancestor” (there are five of them) are cleverly entangled steel emulations of microcosmic cells that make up complex systems. This philosophical and scientific focus within Wishik’s work points to a spiritual acknowledgement of the inner-working of material, culture and earth elements: When the artist creates in communion with the Earth creation, myth opens up to reveal presence and meaning beyond ourselves.

This spirituality through material exploration can also be seen in the show “Golden Hour,” a collaboration between printmaking and book arts graduate candidates Alex McClay, Ciel Rodriguez and Mary Gordon. This show tells a story about shadows and the bodies from which those bodies extend as light rises and falls each day. Pieces like “EarthShine” tell a celestial narrative: two suspended sheets of abaca paper, one whole and golden in hue behind the other, a dark blue sheet created through cyanotype processing. The dark blue sheet has a hole taken from the middle to create a play of light and dark to represent the sun and moon. “Earthshine” is the phenomena of the sun’s light reflecting off of Earth and onto the unlit parts of the moon. This piece is in dialog with her similarly constructed piece “You and Me,” which represents the story of herself and a partner who passed away.

Each piece is built from paper materials that are traditionally flat and considered two-dimensional, with added sculptural elements to bring the work into two and a half dimensions that play on dualities of light/shadow, internal/external. Mary Gordon’s piece “Lunarai” is 365 small leaves or petals made of wire loops and abaca paper. Mimicking the pods of the Lunaria plant, the small structures are interspersed along the far left wall, bringing one into a moment of clustering and spreading out, similar to murmuration in flocks on birds. Many of the leaves have small words embedded in them—short thoughts from each of the artists, creating an internal dialog between secret thoughts and hoped-for things.

Alex McClay’s two-channel video performance Hide and Seek, anchors the work in the back of the gallery. On the left side of the screen, Alex dances in the sun wearing a bodysuit of linked circles made from emergency blanket material. She shimmers and flares as the sun reflects off each circle, transforming her body into a product of earthshine. As she glints and gleams, she emerges and submerges back into the fielded landscape in which she dances. On the right side of the screen, Alex performs a similar dance in the same suit, but inside one of the studio spaces at the Dodd around golden hour, when the sun streams into building and homes. Her body is both consumed by and emerging from the harsh shadows created by the sun, and her body extends through light the shiny material reflects the sun.

These current exhibitions are currently on view through Friday, Mar. 27. Gallery hours for the Lamar Dodd School of Art are Mondays–Fridays, 9 a.m.–5 p.m.