The Athens Institute for Contemporary Art has just finished the second year of its artist in residency program, cleverly titled Artists-in-ATHICA, and has opened up registration for a third year.

Artists-in-ATHICA began with a collaboration between Lauren Fancher and Gunner Tarsa, who had just graduated with a BFA in painting from UGA’s Lamar Dodd School of Art. Tarsa wanted to create an immersive drawing performance within ATHICA that involved an auditory humanities discipline. Kyle Lewis, then an undergraduate at the Hugh Hodgson School of Music, joined the collaboration to organize performances in which Tarsa created drawings in response to Lewis’ musical compositions. This collaboration filled a space in between exhibitions and addressed a need that Lauren had been brainstorming to fill: how ATHICA can stay active as a gallery in a multitude of different types of engagement.

ATHICA’s last resident, from Dec. 15–Jan. 6 of this year, was Claire Molla, a movement and performance artist who has a background in dance and theater. Claire’s performance embraced gender, personal history, the audience’s gaze, sound immersion and healing rituals related to personal loss. Molla’s residency consisted of several performances in which she lay on a couch, facing away from the audience, but melting red wax on her chest. Her partner had rigged a wench system that slowly lowered a mirror in front of the artist, which, throughout a three hour time span, revealed a completed image of her body to the audience. Molla had a heartbeat microphone attached to her chest so that the audience could share in her internal vitality for three hours. At the end of the performance, the lights slowly dimmed. At the very end, her heartbeat microphone stopped and was silent. 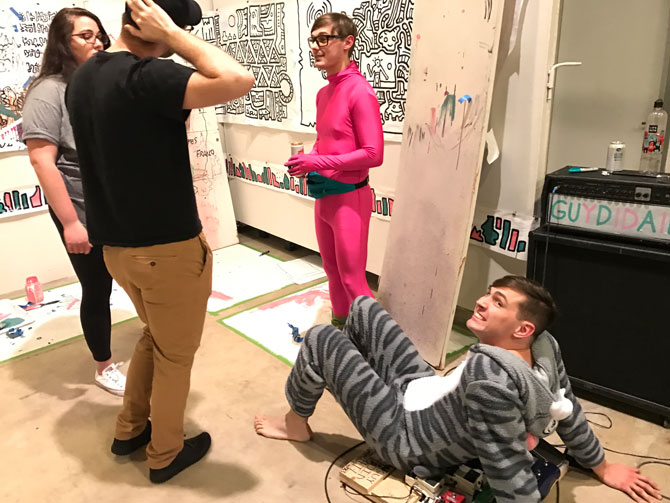 Residents like Molla have found numerous ways to engage both ATHICA’s physical architecture and the surrounding Athens community. In conversation with Fancher about her thoughts on the program two years in, she stated that ATHICA has been fortunate to have had a diversity of artists and ideas come through the gallery with a wide variety of media and disciplines. Fancher sees the residency program as an immersive way of carrying out ATHICA’s mission to be a space of community engagement in support of contemporary art.

Kaitline Shae’s 2019 Artist-in-ATHICA show “Pom Pom” was four weeks long and focused on material, waste, sculpture and weaving. Before the residency, Shae had “harvested” a large amount of UGA game day pom poms, brilliantly red in their hue. Shae began her time at ATHICA by piling the pom poms in the middle of the gallery, creating a plastic form that oscillated between mountainous and creaturely. She then wove the material of the pom poms into a communal tapestry, including other materials such as thread, cloth and mixed media.

Tomie Seo, a Japanese artist, was ATHICA’s second artist in residence, occupying the gallery from Oct.9–22 in 2018.  Seo’s work focuses on the intersection of identity and conflict through the lens of a personalized philosophy that bases itself on attentiveness to political issues (such as race and gender), collective dreams and technology. Within her time at ATHICA, she created a community drawing. Community members were invited to gather at the gallery to draw their dreams and bring nostalgic items or photographs to loan the gallery in order to “showcase the identity and identity of people in Athens through their dreams.”

Outgoing Artist-in-ATHICA Eli Saragoussi is a local artist and lead member of the local band Baby Tony and the Teenies. She used her time at the gallery to create fantastical stage sets that decorated both ATHICA and Caledonia Lounge during the second annual Ad·Verse festival held earlier this month. The sets featured the whimsical plants and creatures of Eli’s imagination, as saturated in color as it is in a playful, visual performance. Overall, Eli’s work aims to “bring a little wonder and magic into everyday life… An immersive meld of saccharine and disturbed in the form of whimsical plants, creatures, clouds and rainbows.” Eli hoped to continue world building in their sets with ATHICA and Caledonia as a way to heighten and broaden the experience of the performers and the audience. ATHICA was planning to host “Precious Moment,” an immersive installation with music by Annie Leeth, as the culmination of Saragoussi’s residency this weekend, but now encourages everyone to explore her work virtually on Instagram at @flimmyflammy instead.

ATHICA’s mission is to be engaged in the Athens community as a source of education, performance and experimentation in multiple forms. Most recently, ATHICA has continued with its usual exhibition schedules, adding an experimental music series featuring several Athens and UGA musicians, led by Kathryn Koopman, a graduating masters student from the Hugh Hodgson School of Music. There have been events collaborating with Ciné like the Monster Drawing Rally last December. Also in the works is the inaugural publication of Local Honey, a zine publication initiated by current ATHICA intern Madison Greer.

ATHICA is now accepting applications for its Artists-in-ATHICA residency program. Also open is a call for applicants for the gallery’s internship program, in which recipients can choose a few months to several months with ATHICA through exhibition building, photography, writing and social media, and education. Links to corporate sponsorship and individual donations as well as information on future events can be found through athica.org.

Alden DiCamillo is a current intern at ATHICA.