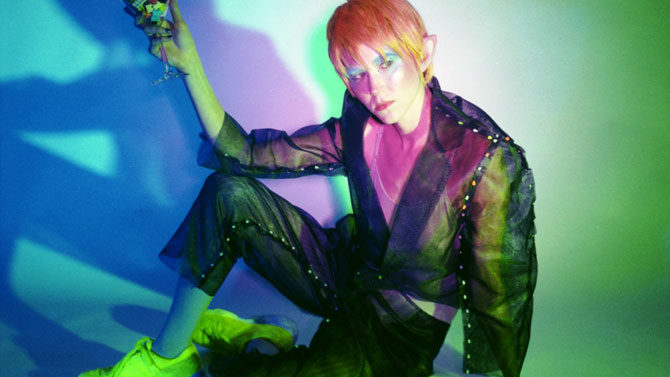 Ad·Verse Fest, created and organized by visual artist and performer AC Carter, brings a second year of fantasy world-building through music performance. Ad·Verse presents differently textured personas, outfits and experiences of predominately queer performers as more than just spectacle; this is how queer folks can exist and find new ways to exist. AC uses they/them pronouns, identifies as non-binary/queer and engages in a gender-fluid aesthetic within their studio practice as a student in the UGA Lamar Dodd School of Art’s sculpture program. “World-building” describes the process of creating an immersive experience through music and visual art that reveals a part of a society, a culture or a region that is hidden by larger systems. Queer communities are often not seen within the US due to the US’s tendency to default to narratives and economic systems that reward straight, cisgendered folks and punish queer, trans and non-binary folks. Within that society, world-building gives queer folks the means to say “We are here.”

Before the first annual showing of Ad·Verse Fest in the spring of 2019, AC had been shifting their studio practice from object making to sound making, wanting to craft experiences that were both playful and political. They began testing the limits of sound combined with fashion and video work to form aesthetics from their own queer experience and that of others. This combination of personas, music production, fashion design and critical art theory helps make Ad·Verse Fest a powerful, whimsical event.

Ad·VerseFest will occur on the evenings of Friday, Mar. 6 and Saturday, Mar. 7, with shows at both the Athens Institute for Contemporary Art and Caledonia Lounge. While mirroring a music festival, Ad·Verse moves into the realm of performance arts. The majority of Ad·Verse’s lineup is made up of queer and minority performers who create multi-sensory experiences that resist embedded heteronormative, cisgendered aesthetics.

One of the headliners for Ad·Verse Fest is Los Angeles-based Dynasty Handbag (Jibz Cameron), a stand-up orator and musician whose work critiques modern fundamentalisms while commenting on queering stage presence through a loud presentation of stereotypical feminism and female-gendered makeup routines that smear and scream throughout their duration. A second performer is Oakland-based Wizard Apprentice (Tieraney Carter), whose work explores gender and identity within a U.S. culture that often urgently genders and heavily racializes most persons. Wizard Apprentice uses experimental, computer-based music to explore a wildly entangled world as a thoughtful introvert.

A lineup that includes performers like Dynasty Handbag and Wizard Apprentice, along with other artists like The Queendom and Bustié, reveals a unique eclecticism that allows Ad·Verse to create colorful, playful resilience within queer communities in the South. Ad·Verse pushes against fad-isms that limit the expressions of queer communities to rainbows and glitter. When everything must be loud or quiet or made with a specific fabric or beaten with a specific mug, Ad-Verse says that all of it should gather together to create richer queer narratives.

The fashion designer aspect of  Lambda Celsius sent a cease and desist letter to the performer aspect of Lambda Celsius regarding inappropriate use of branding during performances. A tragic breakup followed, and AC’s studio practice got the chance to take on three different modes of creating: artistry and networking through AC, performance through Lambda Celcius and clothing design through Klypi. A fourth persona emerged as Vixine Martine, whose Instagram profile reads “PhD Candidate in Art/Music Herstory with a focus on Body and Conceptual Art and Western Pop Circa 1980 to the present.” Martine is the academic who intertwines the other members of AC’s studio personas. This amalgamation reveals a clever and intimate knowledge of interdisciplinary study that’s required of people doing both visual art and performance within the music industries of the Southeast.

AC Carter’s studio at the Lamar Dodd School of Art’s Thomas Street Studios houses a plethora of differently textured performance outfits that are reminiscent of Jessica Stockholder sculptures. Different hues of piercing saturations create various dimensions of visuality. Fabrics of different textures with fasteners that range from normal sewing thread to multi-colored zip ties speak to playful sensuality. Plastic pockets with small trinkets tucked inside create whimsy and discovery. Other elements add fantasy to real life—elf ears, black and white ball pits, saturated cyan blue and scarlet oranges, small Lego earrings. These elements are far from satirical or mere whimsy to escape real life. With AC’s declaration that these elements are what makes up real life experience, this fantasy-making is the world-building that opens the vibrancy of queerness as something that comes up from a saturated, wild, energetic life. We are queer, and so incredibly real.

Ad·Verse Fest will be accompanied by sets designed by artist Eli Saragoussi, whose work also indulges in fantasy world-building to enhance the experience that occurs between the audience and performers. As ATHICA’s current Artist-in-ATHICA resident, Saragoussi is hosting open studio hours for visitors to watch her work in real-time on Wednesday, Mar. 4 and Thursday, Mar. 5 from 10 a.m.–4 p.m.

The lineup for Mar. 6 includes John Kiran Fernandes, Josey, Diatom Deli, Bacon Grease and Wizard Apprentice at ATHICA from 5–9 p.m., then moves over to Caledonia at 9 p.m. for sets by Breathers, Stacian, Bustié, Thank You Please and Micha Lively + Mannequin Lover. On Mar. 7, ATHICA will host Kealin, Secret Friends, Saadia Rias, Ivy Hollivana, Romantic Thriller and LEYA from 5–9 p.m., then Caledonia will feature  Buddy Crime, The Queendom, Home Body, Dynasty Handbag and N/A Dance Party, from 9 p.m. until close. Check out adversefest.space for more details on the artists.