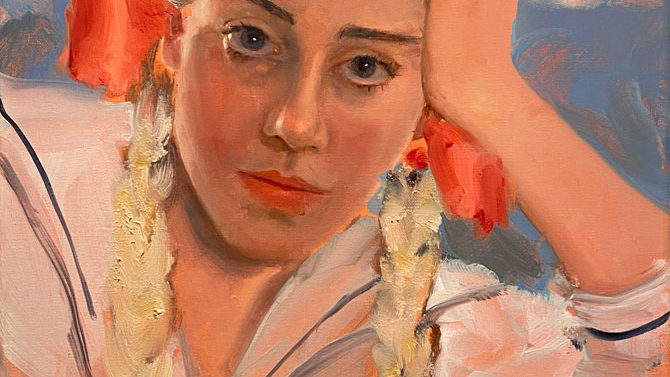 Nestled just above Jittery Joe’s in downtown Athens, art galleries Tif Sigfrids and Howard’s combine residences to create a hub for Los Angeles and New York artists to show work each month. Mingling with the transient student culture and the more resident gallery community surrounding the galleries’ location—just across from Jackson Street where the UGA Main Library resides—Tif Sigfrids and Howard’s create a unique space of Americana with their exhibitions.

Currently, Tif Sigfrids is exhibiting Los Angeles-based artist Becky Kolsrud, and Howard’s is presenting New York-based artist Jenna Gribbon. The conjunction of these two artists presents a plethora of femme and women figures that each press into a different history of figure painting and femme narrative.

Gribbon portrays her girlfriend and other women through paintings done in the style of Western portraiture developed during the early 1900s, similar to the work of Jean-Honoré Fragonard, John Singer Sargent and Mary Cassatt. Each painting is beautifully rendered, but Gribbon lets her brushstrokes show, not blending her paint. When viewers examine the work closely, they can see the layering of paint as they admire the gaze of the women rendered in the painting.

Gribbon’s work conceptually pushes this style of portraiture into a space of contemporary lesbian narrative. Each person portrayed is dressed and styled as a television or literature character of the late 1980s and early ’90s, many of which, while created for the male gaze, became the object of the female gaze before it was popular or common for lesbian femmes to be out publicly.

Gribbon’s portraits start with women intimately familiar to her, shifting the gaze from “male to female” to “women to women.” Their frontal poses, lingering and sensual, skirt the male-constructed nature traditionally embedded within early modern portraiture and stem from an empowered gaze. The femme no longer stares down the male—the femme is looking for another femme. Gribbon’s work creates an engagement that, while open for interpretation, depending on the viewer’s gender and sexuality, flips attraction and visualization of the female persona on its head.

In the back and front of the shared gallery space, Kolsrud’s work also presents femme bodies, but instead of portraiture, they are portrayed full-bodied in different states of severance within earthen landscapes. In one painting, three figures bathe in a pool set into a green paint field. The perspective slants towards the viewer. The figures are without face or anatomical detail. Their arms, looped around each other’s waists, disappear into each other, their bodies painted with the same peachy hues. Overlaid atop the bodies are two sets of eyes, each one as big as their heads. The eyes land in the middle of the heads and just to the side, turning the bodies into sensual, femme cyclopes that shift our perceptions of the body and the space that it occupies. Across the chests of the figures are three large lips with noses underneath—here, the painting becomes whimsical and amusing. The other paintings keep this whimsy but often become alarming with the bodies’ half-constructed nature.

Kolsrud’s use of pattern adds to this disruption of bodily conception and creates a misshapen sense of space. Not only can one question the relationship of the body with the landscape; one can also ask what, in the year 2020, constitutes a landscape. Kolsrud’s formal disruption of background and foreground, combined with her visceral handling of paint and subject matter, presents the viewer with multiple perceptions of a never-stable reality.

Tif Sigfrids and Howard’s shared gallery space reveals part of the local cultural hub. Owners Tif Sigfrids and Ripley Howard harken from different places but met in Los Angeles, where they developed a professional friendship that found commonality over their mutual interest in moving back to Athens. Sigfrids had lived in Athens for a short time during her teenage years in between living in New York and living in Los Angeles. Howard had received a BFA degree in painting from the Lamar Dodd School of Art before moving to New York for a master’s degree and working a few years in exhibition arts. They each wanted to move to a smaller city to create galleries. Through several coincidences, they both ended up in Athens, which they agreed needed a vibrant and contemporary art space. Each gallery aims to network external artists with Athens’ vibrant arts community, which always holds an amalgam of emerging artists blended with established ones.

These galleries are just one piece of Athens’ contemporary art scene. While neither gallery necessarily draws from Southern roots, they demonstrate the ability of the South to house multiple perspectives and multiple infrastructures as regional and multi-regional arts spaces. Gallery spaces in the South, and specifically Athens, ring uniquely. There is a collaboration between the robustness of Southern culture and the unique flavor of visual language brought in by other regional artists. Within the galleries’ space, there are West Coast and Northeastern flavors that showcase an experimentation with portraiture, the materiality of paint and perceptions of space, time and the human body.