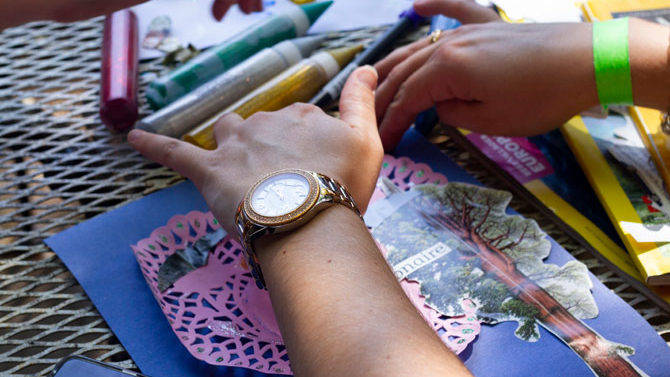 Abe Bocinec, an Athens community artist and recently graduated UGA student, will be conducting the sixth “Quaint” queer art-making event at the Caledonia Lounge this week. “Quaint” is not simply queer folks gathering to create work, as wholesome as that would be—and is, in and of itself. It’s a space created for queer sexual abuse survivors and their allies to form community and healing. It’s a space where creating is centered around queer reconciliation with Southern culture, with the inclusion of trans, queer and non-binary artists first.

“Quaint” partners with The Cottage Sexual Assault Center and Children’s Advocacy Center, one of very few organizations that offer resources to LGBTQIA+ sexual abuse survivors in the Southeast. This collaboration between The Cottage, Bocinec and the Caledonia has blossomed into a daytime, sober event that allows a diverse range of ages to explore their transness, queerness or non-binary status (along with LGBTQIA+ inclusion and advocacy) through artistic, cultural and communal creations.

“Quaint” begins in the early afternoon and goes until the early evening. The interior of the Caledonia is used as a space for artists to show their work, and the outside porch area is used as a communal art-making space. Supplies are provided through donations, the first of which came from Bocinec’s childhood art supply collections. Over the course of a few “Quaint” events, Bocinec developed an open mic portion, opening an opportunity for poetry, song and performance. Each event concludes with a community discussion.

“Quaint” began during Bocinec’s time as a women’s studies major at UGA. He had already been considering starting a trans art collective or commune when he took a service learning class as part of his last year of school. A project prompt asked students to design a community event and write a grant that would support that event. Through a network of opportunities, Bocinec was able to connect with The Cottage in an effort to address abuse and recovery within queer communities alongside his original consideration, eventually making the event to invite allies as well as non-QTNB, LGB individuals. Bocinec, a trans individual whose work has centered around spiritual and community healing, connected with the Caledonia, which, while not an exclusively queer venue, frequently houses queer performances, including the Kourtesans drag shows, Intrusive Thots and Ad•verse Fest, hosted by queer musician and artist AC Carter.

Bocinec and the Caledonia arranged for the lounge to be available during the afternoon so people of all ages could attend without needing to cater to 21-and-up rules that often play into queer gatherings in bars. In this way, “Quaint” became a sober event for queer folks, which, while not unheard of, is still an anomaly within cities, especially university-centered cities. For each “Quaint,” The Cottage provides a social worker so minors who cannot bring their parents for fear of being outed can have a guardian. Parents have shown up to “Quaint,” pushing the event to be a healing space between queer folks and their families.

As Bocinec talked about “Quaint,” he spoke about his hope for reconciliation between Southern culture and queerness. He used the short anecdote of a family dinner table: There might be pain for queer folks in gathering for a family dinner or a large group event, due to the reminder and fear of otherness and lack of acceptance. But when one gathers with other queer persons and allies, there is the chance to heal the act of gathering and to heal the act of kin-making and caring for that kin.

There is a privileged safety in the urban densities and progressive politics that exist in some northern and West Coast cities, and there is often pressure within Southern spaces to emulate those cultures in an effort to enter queerness safely. “Quaint” moves past that need, latching on to a wholesomeness native to the South. In “Quaint,” the South is not treated as backwards—not embedded within the past. Its narrative of the South is one that is fluid and contemporary. “Quaint” is an effort in the midst of that contemporaneity to provide healing and community that emerges from queerness as a point of cultural resilience.

The next “Quaint” will be at the Caledonia Lounge on Saturday, Feb. 8 from 1–5 p.m. There will be an open mic from 3–4 p.m. with a community discussion after. Around the date of the event, there will be a mural for “Quaint” created inside the interior of the Daily Groceries Co-op on Prince Avenue. As the design is being finished, Bocinec is searching for aid in painting and executing the mural. For any questions about “Quaint,” including future events, contact Bocinec at abebocinec@gmail.com.