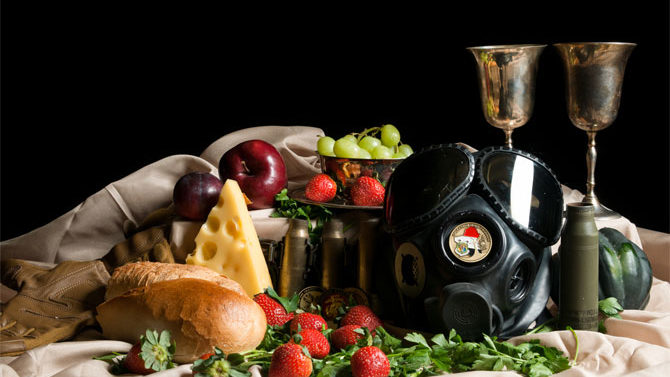 Editor’s note: Alden DiCamillo is an education intern at ATHICA.

The Athens Institute for Contemporary Art’s upcoming exhibition “Losing Control: Guns, Government, and Group-Think” presses into the question, “How can arts-based representations of violence acknowledge grievance while moving forward with resilience?” Through an intersectional group of multimedia artists, the exhibition tells a narrative born out of historic and cultural violence using more than just anger and sorrow. “Losing Control” acknowledges emotions that do not have names.

Deja Nicole Echols’ “Black Voices in White Spaces (vol. II)” is a depiction of a young person of color in a tub with their arms and legs extended to show crucifixion wounds in their hands and feet. Gentle folds in their T-shirt and shorts nest in the vessel they lie in—is it a tub for bathing wounds or a grave from which to resurrect? Also drawing influence from Kerry James Marshall and others like Titus Kaphar, Echols’ work cradles narrative in a middle space between love and violence, terror and hope.

“DLP_WALL” by visiting artist Mark Menjivar recreates David Lee Powell’s 32 years on death row through handwritten notes on differently colored sticky notes, notecards and scraps of paper. This piece, originally part of the contents of Powell’s cell, were first shown as part of “Walls Turned Sideways: Artists Confront the Justice System” at Canada’s Centre for Addiction and Mental Health. The narrative of Powell’s use of a Russian-made AK-47 machine to kill a responding officer during a routine traffic stop is juxtaposed with intimate items like a photo of flowers, a cutout from a newspaper that states “you are perfect,” an image of the murder weapon, and photos of Powell to create a space of complicated empathy.

Jason Reed, an artist from New Braunfels, TX, provides a collection of photos from the U.S. Customs and Border Protection training facility, originally part of the project “The Place Where Flags Wave.” Viewers come face to face with troubling faux violence. In one photo, the barrel of the gun pointing forward is all that can be seen, save for slivers of a human face behind it.

In Corrina Sephora’s “Flourish,” the barrel of a replicated automatic weapon blooms into a twisted, floral bouquet of metal. “Flourish” gives a sense of scale to automatic weapons while questioning how to grow from violent origins. What grows from a nation built from the violence of manifest destiny? Natalie Baxter’s piece “Patty” is an additional gun replica, but contrasts Sephora’s piece with its saturated pink color that subverts traditional U.S. gender normatives in order to unpack political tensions surrounding nostalgic Americana. “Patty” is made from fabric, causing the barrel of the gun to droop wearily, losing its ferocity.

An architecture of violence is brought into the exhibition with Jessica Caldas’ installation of architectures that have been targeted by gun violence—homes, churches and schools—and Paul Wiener’s “Copycat” reinserts human faces into human anatomy targets that climb the wall of the gallery.

Political portraits are created through Ricder Ricardo’s “Caravas V” and Victor Ali’s digital print “We Are (Not) Machines.” Ricardo, whose art speaks often from his narrative as a gay man of Cuban-American descent, portrays the upper portion of his own likeness and torso, but from the chest down, his image is hollow—only drips of paint and some mark-making, as if grief and self cannot be named. “We Are (Not) Machines” demonstrates Ali’s cyberpunk influence and sets up a complicated gaze through an image of a young femme body created out of digital patterns who looks straight at the viewer while bearing a target over their face. Hector Rene Membreno-Canales presents a different type of portraiture in the photo “Nature Morte 2”: a modern vanitas with a gas mask and army-based implements lying in between lush cheese, fruit and bread.

“Losing Control” is not subtle, nor is it simple. Each piece connects to race, gender, sexual orientation and geographic politics. The exhibition laments death and violence, but also presents resilience and hope in the reuse of material to create intersectional groundwork for reparational history. “Losing Control” points to the fact that violence has lost control in its saturation of U.S. society, but also suggests that our emotions might need to lose control to confront that saturation: We might need to be less silent and more willing to loudly portray immense grief and resilience in its many nonverbal forms.

An opening reception will be held at ATHICA on Saturday, Nov. 2 from 6–9 p.m. Curator Arlette Hernandez will offer a talk the following day, Nov. 3 at 4 p.m. Visiting artist Mark Menjivar will lead a panel discussion with faculty from the UGA Latin American and Caribbean Studies Institute to explore the intersection of violence in Central America and American policies on Thursday, Nov. 14 at 6 p.m. The following day at 12:30 p.m., Menjivar will offer a performance and talk related to his work examing the contents of convicted murderer Powell’s cell at the time of his execution. Kathryn Koopman will lead an evening of experimental music on Saturday, Nov. 7 at 7 p.m., and the exhibition will close on Sunday, Dec. 8.