What Makes the Athens Scene so Special? 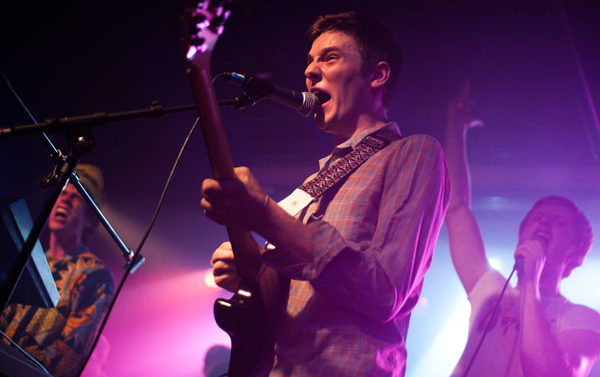 “Nobody cares at all; everybody cares so muchâ€”both. That is what it seems like to me, anyway, since about 1980…” â€“ Bertis Downs, R.E.M. general counsel

There’s a semi-famous black-and-white picture of the Ramones in their CBGB’s-haunting heyday, riding the subway. Johnny Ramone has his guitar in a shopping bag. They look tired.

For most people, that’s the tradeoff one has to make. If you want culture, you need to find a city to live in, and the inherent hazards must be reluctantly endured. Intense traffic, a high cost of living, an arduous lack of mobility or space and, of course, that famously dehumanizing hustle. Coincidentally, these are all qualities that one would be hard-pressed to find in Athens.

Athens’ history in American musical culture is unique and pioneering. It essentially boils down to the somewhat daring idea that the crush of city life does not have an exclusive stranglehold on the fun associated with an exciting, creative and open-minded music community. Bands like Pylon, The B-52s, R.E.M. and legions of others were doing it themselves before â€œD.I.Y.â€ was a television channel: throwing parties that reacted to the shockwaves the Ramones and their punk-rock ilk had sent rippling down the East Coast from New York City. The Athens bands’ brand of music, which emphasized sincerity and energy above all else, in turn seemed to send a message as if via sonar to the surrounding areas: Athens is it. You want to get involved in music? If you’re in the South, this is the place to do it.

When we say â€œinvolved in musicâ€ there are several different ways we can mean it. Let’s oversimplify and put people in three categories: audience, performer and infrastructure. For the concert-going public, Athens is simply an overabundance of spoils. In and around our compressed downtown areaâ€”a mere five blocks squared, plus some outlying neighborhoodsâ€”there are roughly 20 bars, clubs, coffeehouses and so on that have music six nights a week, at least. These venues range in specialty between weirdo indie-rock, jazzy jam fare, truly heavy metal, modern folk music, frothy punk and all aesthetic places in between. You can literally walk from one end of downtown to the other in about 15 minutes, getting an earful in the process (but factor in time to chat, you’ll be running into a lot of people you know on the way).

For performers, it gets better from there. Downtown’s surrounding neighborhoods are a quiet, lush cross-section of tree-shaded drives, with plenty of cheap housing for those requiring the space for, say, a drum set. If you’re the Neil Peart type and your drum set is a bit outsized, there are plenty of practice spaces, including NuÃ§i’s Space, which doubles as a health resource center exclusively for local musicians. As far as infrastructure goesâ€”non-musicians who wish to be involved behind the scenesâ€”the University of Georgia offers a program in music business, and there are many music industry companies where the ambitious young intern-to-be can get a foot in the door. And, everything can be reached by bike.

So, while the music scene offers just about anything you could want out of a city, there’s another element present that is actually anathema to a lot of what the metropolitan music scene represents. It’s difficult to explain, but it basically comes down to something like this: people here like to make art. While local businesses and the fine folks at Downtown Development take commerce very seriously, the easygoing quality of life for musicians here creates an environment where if one can find the resolve and the focus required, one can go very, very far with creative pursuits.

In other words: in Athens, the cost of living doesn’t get in the way of actual living. Here, time can be made to put in the work to become the kind of musician one desires to become. Don’t forget this is the town where Brian Burton pored over vinyl while working at Wuxtry Records, later putting his wide breadth of musical knowledge into vastly inventive work under the name Danger Mouse. Members of the storied Elephant Six collective might not have had the time and resources to make their widescreen analog epics had they lived in a place less thriving with available, collaboration-ready talent. The list goes on, but the point remains that due to these socially combustive conditions, Athens has, 30 years on, continued to be the right place for music and musicians in the South.

And there’s no traffic.

“What makes Athens music scene special is the fact that there is something here for everyone. No matter what type of music you love or how many different genres you enjoyâ€¦ there is an artist, band or venue that plays it.” â€“ Elite Ellison, AKA Elite tha Showstoppa

“When I first arrived in Athens in 1972 there were two stores, Fool Your Friends and Ort’s Oldies, selling records and planting the seeds for what would become this vibrant music scene. Thirty-nine years later there are three stores that continue the tradition: Low Yo Yo Stuff, Schoolkids and Wuxtry Records. They supply the needs of music lovers who now come from around the globe. Add to the mix vintage boutiques like Agora, Minx and Modern Star plus countless thrift shops selling used vinyl, tapes and CDs and you will find that Athens remains one of the best places to shop for music.” â€“ Chris Razz, Low Yo Yo Stuff Records

“I have seen the Athens music scene evolve for years. There are a couple of consistent factors: One is the area where most of this takes place. Downtown Athens is compact and not tremendously spread out like it would be in a larger city. It is walkable. Eventually, if you go out, you will meet most of the players involved. It is a very supportive scene. We go to each other’s shows. Athens has been fortunate to continue to attract young and talented artists. We are also now raising our own. A lot of the younger musicians actually grew up here. If our scene relied only on the great things that have already happened, it would stagnate and die. However, in the process of moving forward, we have not forgotten the past.” â€“ Vanessa Hay, Pylon

“I think a big part about the Athens music community, just like any good town, is the tight-knit and caring community. Everybody knows everybody else! Everybody is very supportive of each other. In terms of Athens music history, you GOTTA watch Athens, GA: Inside/Out. I watched that my freshman year at UGA through the radio station, WUOG, and it really gave me a huge appreciation for the historic music scene pluussss the bands/people in the movie are soooooo radical, carefree andâ€¦ I dunnoâ€¦ Athens! It really gives musicians a benchmark for creative weirdness that we Athenians pride ourselves on.” â€“ William Kennedy, Reptar