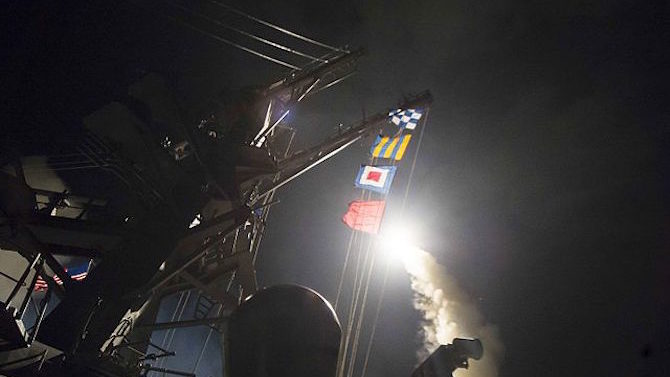 Donald Trump has spent a lot of time in the courts, so he must be familiar with the legal concept of “cui bono”—“who benefits?” When a crime is committed, the likeliest culprit is the person who benefited from the deed. But he certainly did not apply that principle when deciding to attack a Syrian government airbase with 59 cruise missiles early Friday morning.

The attack against Shayrat airbase, the first US military action against Bashar al-Assad’s regime in six years of civil war, was allegedly a retaliation for a poison gas attack on the rebel-held town of Khan Sheikhoun three days before that President Trump blamed on the Syrian regime. But who stood to benefit from the chemical attack in the first place?

There was absolutely no direct military advantage to be derived from killing 80 civilians with poison gas in Khan Sheikhoun. The town, located in al-Qaeda-controlled territory in Idlib province, is not near any front line and is of no military significance. The one useful thing that the gas attack might produce, with an impulsive new president in the White House, was an American attack on the Syrian regime.

Who would benefit from that? Well, the rebels obviously would. They have been on the ropes since the Assad regime reconquered Aleppo in December, and if the warming relationship between Washington and Moscow resulted in an imposed peace settlement in Syria, they would lose everything. (Only a few days ago, U.S. Secretary of State Rex Tillerson said that removing Assad from power was no longer Washington’s priority.)

Al-Qaeda—and probably several other rebel groups—have access to chemical weapons. The country was awash with them before the war, because the ability to make a mass chemical-weapons attack on Israel was Syria’s only deterrent against an Israeli nuclear attack. (Assad, and his father before him, understood clearly that Syria would never be allowed to have nuclear weapons of its own.)

Chemical weapons were stored in military facilities all over Syria, and at one point half the country was under rebel control. So of course the rebels have had some for years, and are known to have used them on occasion in their own internecine wars. Would al-Qaeda have hesitated to use them on innocent civilians order to trigger an American attack on the Syrian regime? Of course not.

The results have already been spectacular. The developing Russian-American alliance in Syria is broken, the prospect of an imposed peace that sidelines the rebels—indeed, of any peace at all—has retreated below the horizon, and Rex Tillerson has just declared that “steps are underway” to form an international coalition to force Bashar al-Assad from power. Not a bad return on a small investment.

But we should also consider the possibility that Bashar al-Assad actually did order the attack. Why would he do that? For exactly the same reason: to trigger an American attack on the Syrian regime. From a policy perspective, that could make perfectly good sense.

The American attack didn’t really hurt much, after all, and it has already smashed a developing Russian-American relationship in Syria that could have ended up imposing unwelcome conditions on Assad. Indeed, Moscow and Washington might ultimately have decided that ejecting Assad (though not the entire regime) from power was an essential part of the peace settlement.

Assad doesn’t want foreigners deciding his fate, and he doesn’t want a “premature” peace settlement either. He wants the war to go on long enough for him to reconquer and reunite the whole country (with Russian help, of course). So use a little poison gas, and Donald Trump will obligingly over-react. That should end the threat of US-Russian collaboration in Syria.

Either of these possibilities—a false-flag attack by al-Qaeda or a deliberate provocation by the regime itself—is quite plausible. What is not remotely believable is the notion that the stupid and evil Syrian regime just decided that a random poison gas attack on an unimportant town would be a bit of fun.

But if Trump was taken in by the Syrians, he certainly exploited his attack to send a very serious message to China and North Korea. He is a player too, after all, and it can hardly be an accident that he timed the attack for the day of his meeting with China’s President Xi Jinping.

Wheels within wheels. It is going to be a wild ride.

Even More Beer News (and Baseball!)