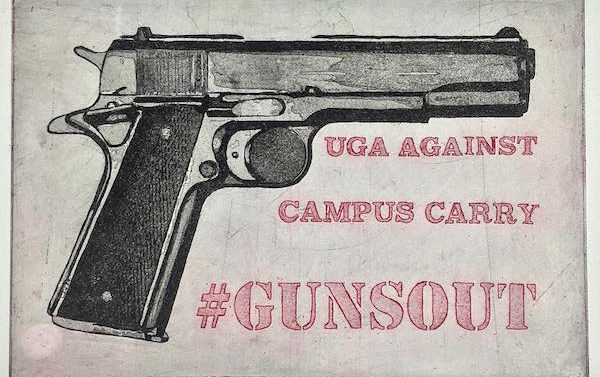 As they did last year, the Poetry Action Network—a group of Athens writers led by Magdalena Zurawaski, Laura Solomon and Jenny Gropp—is taking to Twitter to oppose “campus carry” legislation passed by the Georgia legislature.

The Poetry Action Network is asking campus carry critics to download a sign here, print it out, take a picture of themselves holding the sign, and tweet the photo to @vetocampuscarry or @poetryaction, or email it to poetryactionnetwork@gmail.com. The photos will be tweeted at Gov. Nathan Deal all day in an effort to convince him to veto House Bill 280.

In Augusta, a group called Everytown for Gun Safety ran an ad in the local paper opposingHB280 during the Masters—which is attended by pretty much every legislator—and a similar ad will run in the AJC later this week.

Those concessions lost some votes in the legislature, although the measure still passed both chambers easily.

Three Athens legislators—Sen. Bill Cowsert (R-Athens) and Reps. Regina Quick (R-Athens) and Chuck Williams (R-Watkinsville) said at a recent Chamber of Commerce event that they voted against HB 280 because they felt it carved out too many exceptions.

Rep. Spencer Frye (D-Athens) said he voted against the bill because individual colleges and universities should be able to decide whether to allow guns on campus. University System of Georgia Chancellor Steve Wrigley, the presidents of every public college and university in the state and campus law enforcement agencies all opposed the bill.

Sen. Frank Ginn (R-Danielsville) said he supported the bill because students taking night classes should be able to protect themselves, according to the Athens Banner-Herald.