Trump Is Right to Want Better Relations With Russia 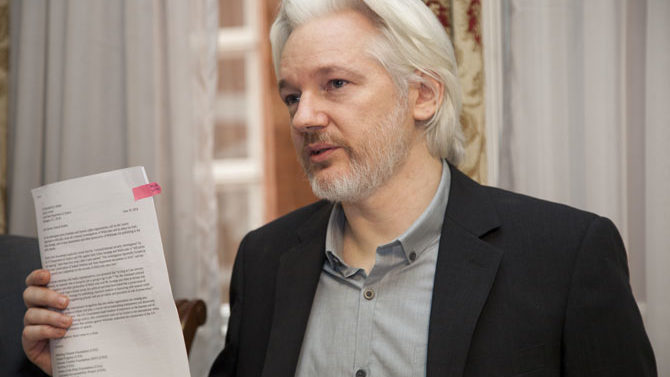 When a Fox News reporter asked Donald Trump about WikiLeaks founder Julian Assange back in 2010, just after Assange had released a huge cache of secret U.S. diplomatic cables, the reality TV star had no doubts: “I think it’s disgraceful. I think there should be, like, the death penalty or something.”

Circumstances change, however, and smart people with big brains know when it’s time to switch sides. It was WikilLeaks, once again, that revealed the hacked emails from the Democratic National Committee that did such damage to Hillary Clinton’s campaign last summer. But Trump now readily accepts Assange’s word that he didn’t get those emails from the Russians.

Trump has been having a problem with the main U.S. intelligence agencies, which unanimously insist that the Russians did indeed hack the DNC’s emails, and that they passed them to WikiLeaks (through an intermediary) in order to damage Clinton’s presidential campaign. “Putin and the Russian government developed a clear preference for President-elect Trump,” as the joint intelligence report put it.

So Trump was very happy to be able to reply (in a tweet, of course) that “Assange… said Russians did not give him the info!” After all, what motive could Assange have for lying about it?

Well, there is the fact that Assange has been living in one room in the Ecuadorian Embassy in London for the past four years in order to avoid being extradited to the United States on espionage charges that could get him up to 45 years in prison. Donald Trump is the one person who could make all that trouble go away, once he becomes the president, so doing him a favor now might be a wise move on Assange’s part.

Moreover, as Trump points out, the Central Intelligence Agency, the National Security Agency and the Federal Bureau of Investigation are the same organizations that cooked up the evidence for Saddam Hussein’s “weapons of mass destruction” so that President George W. Bush could invade Iraq.

Nevertheless, the U.S. intelligence agencies are probably right to blame their Russian counterparts for the hacks that caused the Clinton campaign such problems. President Vladimir Putin has been quite open about preferring Trump to Clinton, and the leaks definitely gave a boost to Trump’s campaign in late July and August.

On the other hand, that happened so long before the actual vote in November that it’s impossible to say if it had any effect on the outcome.

It’s all might-have-beens, and the only reason it has become controversial is Trump’s extremely thin skin. He is questioning the intelligence services’ conclusions about Russian interference because he believes (wrongly) that they undermine the validity of his election victory. But his strong sympathy for the Russian position, though driven by perceived personal interests, is a refreshing break from the usual Washington paranoia.

He said it himself (in another tweet): “Having a good relationship with Russia is a good thing, not a bad thing. Only stupid people or fools would think that it is bad. We have enough problems around the world without yet another one.”

This is a perfectly reasonable statement. Trump’s views on China give cause for alarm, but his desire for a reconciliation with Russia makes more sense than the reflex hostility that both Hillary Clinton and the U.S. intelligence services bring to the relationship. Vladimir Putin is a player, and sometimes he plays rough, but his recent meddling in the American election is far less than the massive U.S. interference in Russian elections in the 1990s.

In seeking a rapprochement with Moscow, Trump should not make the mistake of accepting Russia’s illegal annexation of Crimea. Changing borders by force (even if most of the local population approves of it) has been banned by international law for more than half a century, and we should not start making exceptions to that rule now.

But while the United States never accepted the old Soviet Union’s illegal annexation of the Baltic states in 1940, it did not let that stand in the way of improving the U.S.-Soviet relationship as the Cold War drew to an end.

There is much that the United States and Russia could usefully cooperate on now, starting with putting an end to the war in Syria. On this issue, at least, Trump is right and Obama, Clinton and the spooks are wrong.