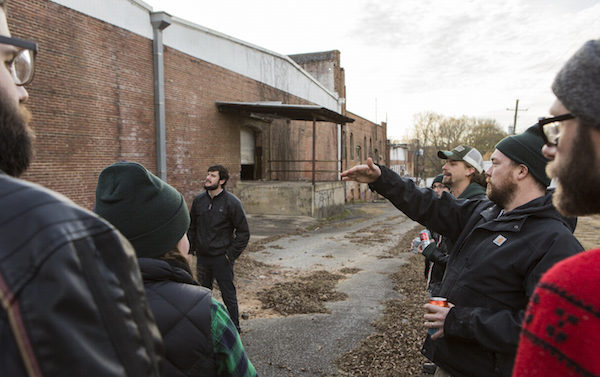 Creature Comforts will renovate part of an old mill off Chase Street just north of Boulevard into an $8 million new brewery slated to open this fall, the  Athens company announced today.

The Athens-Clarke County Commission unanimously approved a $475,000 taxpayer contribution to the project at a specially called meeting tonight. The county Industrial Development Authority will use the money to buy brewing equipment that it will lease to Creature Comforts for a nominal fee for five years, after which Creature Comforts will own the equipment.

“This is an Athens company, and we want to keep those expansions here,” ACC Manager Blaine Williams said.

In return, the company agreed to make the capital investment to renovate part of the vacant Southern Mill, a Bryan Street denim factory that closed in the 1990s. Other parts of the property are slated to become a residential development with commercial space and art studios, although the project has made little apparent progress since winning ACC approval more than a year ago.

Commissioner Melissa Link said she hopes Creature Comforts coming in will jump-start the rest of the project and others like it in the industrial area between Boulevard and the Loop.

“This is a corridor that has a lot of potential for small-business growth,” she said.

Creature Comforts will hire 25 full-time employees earning an average annual wage of $34,000 and 11 part-time employees to staff the new brewery. The deal with ACC includes a clawback provision.

It will take seven years’ worth of tax revenue to earn back the $475,000 ACC is spending, Williams said. In the meantime, though, the school district will be reaping a windfall, and the county as a whole will benefit from the investment in the mill and the jobs created, Williams said.

Creature Comforts has experience in historic preservation, winning an Athens-Clarke Heritage Foundation award in 2014 for renovating the old Snow Tire building on Hancock Avenue downtown. That brewery will remain open.

“We love these old buildings and chose this one specifically for its history and presence,” CEO Chris Herron said in a news release.  “We will make every effort to preserve the structure and materials on the site, and just as we did at Snow Tire, we will honor the history of the site.”

Creature Comforts recently increased its capacity on Hancock, but is running out of room to expand there.

Tours will continue at the Snow Tire building and will be offered at Southern Mill as well, although company spokesman Johnathan McGinty said it may take a while for production to get ramped up.