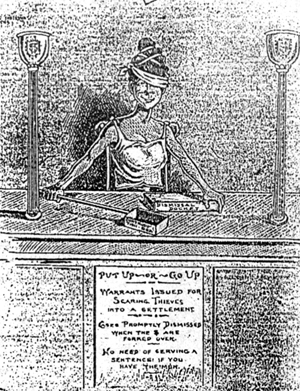 On Dec. 20, 1897, Orth Stein, editor of The Looking Glass, was beaten by Atlanta City Court Solicitor James F. O’Neill in the lobby of the Kimball House hotel. Stein was arrested for carrying a concealed weapon. On the following Monday he and O’Neill appeared in police court before City Recorder Andrew Calhoun, O’Neill accused of assault and battery. The prosecution presented the case against O’Neill, then his counsel, Harvey Johnson, recently returned U.S. Consul at Antwerp, rose for the defense:

“I know in point of law that my client is guilty of a breach of peace, but I wish to ask the court if a convict, a liar, a scoundrel and a murderer at heart can besmirch the character of an honorable man and go unpunished? I ask if this creature, whose picture is in the rogue’s gallery at Maddox-Rucker banking house, if a forger, a liar and a dirty brute who holds no one sacred: who assails the young girl going to the altar, who slanders the solicitor doing his duty: this hyena who goes even to forgotten graves to attack the dead of Atlanta’s best citizens—can he do this and no man be permitted to slap his face?”

Stein turned pale and called out to Judge Calhoun, “You honor, your honor, must I submit to this? Will the court not protect me?”

Johnson stood three feet from Stein; a detective rushed between them as the attorney taunted the editor:

“I’m personally responsible for everything I say. I am here now. I will be in the streets in a few moments and I shall be in Atlanta for years to come. You can see me at any time.”

The courtroom erupted in confusion, and Stein’s friends rushed him away from his tormentor as Judge Calhoun pronounced Solicitor O’Neill guilty of assault and battery and fined him $10.75.

Stein soon got support from an unlikely quarter. The People’s Party Paper, statewide organ of the Populists, printed a front page double-column editorial praising Stein and denouncing O’Neill as unfit for public office. Stein had never missed an opportunity to lampoon and denounce the Populists, but he graciously thanked his enemies for their show of solidarity.

Stein’s troubles had just begun. The next grand jury indicted him on the concealed weapon charge. He posted $300 bond and his trial was scheduled for Jan. 19, 1898, but he was too sick to appear and his case was continued. The grand jury sought no indictment for O’Neill for assault and battery. (His police court appearance did not extinguish the possibility of state charges for the same offense.) This infuriated Stein’s supporters and they approached the grand jury with their complaint. The grand jury found a true bill against O’Neill and his case was scheduled for the same day as Stein’s, Jan. 28.

The trials were short and without incident. Judge John Candler fined O’Neill $50 for assault and battery and gave him a little lecture about how an officer of the court should know better than to take the law into his own hands. He told Stein that his charge, carrying a concealed pistol, was far more serious and that he never fined a white man less than $100 for that offense, which amount he promptly imposed.

Stein did not miss a beat in his many duties at The Looking Glass. It had been several months since he had flayed his special demon, Judge John Berry, but the judge once more provided a broad and beckoning target.

After attending the theater on the night of March 3, James W. English, police commissioner, former mayor and political enemy of Judge Berry, dropped into Atlanta’s exclusive Capital City Club for a drink. He saw Judge Berry playing cards and approached him with a question: Was it true that Berry had revived the old rumor that he, English, was the secret financial backer behind The Looking Glass? Berry replied in a lawyerly fashion that while he had indeed repeated that rumor, he had taken care to present it as only a rumor, not as fact. This nicety would not suffice for Captain English and he laid rough hands on the Judge until separated by fellow club members.

But the judge’s evening was not over. Captain English quit the field, but within minutes his son, James English Jr., had entered the card room and confronted Judge Berry about some completely different controversy, apparently more personal in nature. The son was swifter, and probably drunker, than the father: He pulled out a pistol and battered Judge Berry’s face with the butt of it before the gentlemen of the club could intervene again.

The Looking Glass covered the incident gleefully. Stein’s article began: “That Captain J.W. English did perfectly right in punching the head of ‘Judge’ John Berry at the ‘Scrapital’ City club last week is the opinion of nearly everybody in Atlanta whose opinion is worth having.” The piece returned to Stein’s old theme of Berry as a coward by mentioning that young English had recently flung a glass of wine in the judge’s face at the club, and that Berry had once again done nothing to resent it.

Orth Stein had been goading the judge for a year and a half. He had repeatedly denounced Berry as an ungentlemanly coward and now the time had come for him to learn the truth of his accusations in the most concrete and unpleasant way.