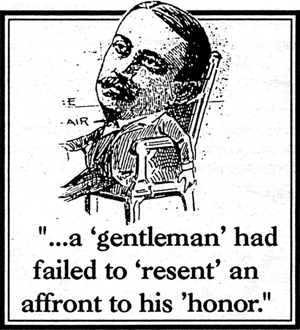 Orth Stein had written, drawn, womanized, forged checks and killed his way across the continent. He survived a brutal murder attempt in Denver, twice cheated the gallows in Missouri, and slaved for years as a convict laborer in the Florida phosphate mines. Editor Stein feared nothing from exposing the weaknesses of a mustachioed young fop from the Capital City Club, even should the fop be Judge John D. Berry of the City Criminal Court of Atlanta.

When Governor W.Y. Atkinson appointed Berry to the bench, Stein had made public the political debts that Atkinson owed Berry’s powerful father and uncle and, more damningly, detailed the near unanimous initial objections of Atlanta’s lawyers to young Berry’s appointment and their retraction of those objections under intense pressure from old Judge Berry and Judge Bigby.

Berry had not been on the bench two weeks when Stein tore into him for his lenient treatment of the Reverend Mr. Henry Lights, a Methodist minister who had seduced a 13-year-old girl at a revival meeting, gotten her pregnant, then refused to pay support to her and her child. Berry fined Lights $100 and let him go without paying a dime to the disgraced child and the child he had fathered on her. Stein spared no vitriol in noting that $100 was also the exact fine Berry had levied on a woman convicted of selling beer on Sunday without a license.

Stein laid off Berry for seven months, but on Aug. 1, 1896, he again trained the rays of The Looking Glass upon the judge. Fulton County legislators were moving to establish a third City Criminal Court judgeship; as recently as one year before two judges had been sufficient to handle the caseload, but Atlanta lawyers complained that the docket was now backlogged with between 2,000 and 2,500 cases. Stein laid out the facts: Judge Berry’s predecessor had held court seven hours a day, often six days a week. Berry convened court for only five hours a day and never worked on Saturday. Even more damaging was Stein’s revelation of the number of days on which Berry had held no court at all: 157 out of 270.

Stein’s arithmetic was a bit unfair, counting Sundays and holidays in the total, but even so, Berry’s neglect of his duties was manifest. Stein noted that the judge was even then out of the city for a week, whereabouts unknown. The article went on to detail tentative attempts to impeach Berry which had come to naught, since incompetence and neglect were not sufficient grounds.

Finally Stein told of Berry’s ambition for a Superior Court judgeship and how he had cut a deal with Fulton Colville, a potential rival, promising Colville his own City Court seat if he would bow out of the Superior Court contest. Colville agreed, but Berry began his campaign without either resigning his post or lobbying for Colville. When Colville confronted Berry, the latter denied they had ever had a deal. Colville publicly called him a liar and, Stein reported, Berry had not contradicted the charge.

This was Stein’s hardest blow: publishing a claim that a “gentleman” had failed to “resent” an affront to his “honor.” The brutal and heathenish code of honor which had sent untold hundreds of Southern men to their graves was still afoot in turn-of-the-century Atlanta. If a man did not respond with violence or demand a retraction when accused of lying, he was branded as a self-admitted liar and coward. To charge someone with failure to respond to such an accusation was tantamount to making the accusation oneself. For the time being, Berry chose not to respond to Stein’s provocation.

In December, six prominent Savannah citizens in Atlanta for the legislative session were enjoying a friendly game of penny-ante poker in a hotel, among them W.W. Osborne, Chatham County prosecutor, ex-legislator, and former part-owner of Stein’s short-lived Savannah Telegram. Into the room came a detachment of Atlanta detectives who arrested the distinguished gentlemen and took them to jail. Fulton County Solicitor James F. O’Neill soon brought charges against them for gambling and Judge Berry gave them the maximum fine.

Under the headline “An Outrageous Prostitution of the Law,” Stein weighed into Berry and O’Neill in the next Looking Glass, noting that under the city’s fee system O’Neill would pocket most of the fine money. He further claimed that one of the arrested card players had said that he and others had seen Berry and O’Neill themselves playing poker at Savannah’s Oglethorpe Hotel and would have the Chatham County grand jury investigate the matter with an eye to bringing indictments against them.

This issue of The Looking Glass appeared on the morning of Dec. 18. When O’Neill saw it, he left his office and headed to the Kimball House, where Stein rented an apartment. O’Neill later said that he told no one of his intention to go to the Kimball, but, just by coincidence, three of his friends, including State Representative T.D. Oliver, were in the lobby and had just sent word for Stein to come down.

Stein’s and O’Neill’s accounts of the incident would differ: O’Neill claimed that he approached Stein, accused him of printing lies and slapped him hard in the face. He said that Stein “failed to resent the blow” for a full minute, then moved as if to pull a gun, whereupon one of his friends held Stein while O’Neill punched him in the head. Stein mentioned no slap, saying only that O’Neill’s friends held him by the coat and wrist while the prosecutor slugged him without warning. The four men flung Stein to the stairs, pinned him down, and summoned a policeman who arrested the editor, searched him, found his pistol and marched him off to the police station in the rain.