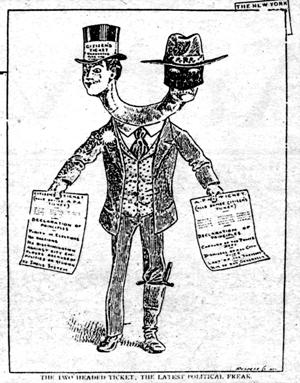 By late 1896 Orth Stein had made himself a power to be reckoned with in Atlanta and throughout the state. The Looking Glass sold over 12,000 papers weekly, with some issues selling twice that amount. Stein had unearthed a scandal which led to the censure of a south Georgia Superior Court judge; he had exposed nepotism and corruption in Atlanta’s city government and had, for the first time, revealed to the people of the state the disgusting annual revels of their elected representatives during the closing hours of the General Assembly session.

The Looking Glass had moved its headquarters to a Whitehall Street building with a large electric sign; Stein’s office was “The Black Room,” painted entirely black with deep red carpet and furniture, the ceiling covered with silver stars representing the constellations. Stein, following a lifelong habit, lived in a hotel; his rooms at the Kimball House placed him at the nerve center of Georgia’s business and political life. Without family or social appearances to maintain, he could devote himself entirely to his newspaper and to ceaseless wandering through At-lanta’s twilight world of brothels, theaters, police stations, saloons, poolrooms and all-night restaurants.

Either from principle or through secret subsidy The Looking Glass served the interests of the English-Venable faction in Atlanta politics. There was no great ideological difference between this group of capitalists and the rival Brotherton group; both bitterly opposed the growing militancy of the city’s white working class, and both scrambled for lucrative municipal utility and construction contracts. The English-Venable group did take a more worldly view of drinking, gambling and prostitution; this alone may have kept the hedonist Stein in their camp.

Stein denounced “the Brotherton ring” and all their works. He ceaselessly explored and ridiculed the uneasy alliance between the Brotherton faction, the city’s growing prohibitionist movement and the American Protective Association. The APA, invariably known as “the A.P. Apes” to readers of The Looking Glass, was a nationwide secret society based in the Midwest with close but unacknowledged ties to the Republican party. The APA was fiercely anti-immigrant and rabidly anti-Catholic. Similar in impulse to the antebellum Know-Nothings (in which Stein’s father had been active in Indiana), the APA sought to build a political base among the lower middle class and skilled workingmen menaced by the severe depression of the 1890s. The APA grew rapidly in Atlanta, heavily infiltrating the police department and several of the older, more conservative labor unions. In the 1896 municipal campaign Stein lambasted Brotherton’s “Citizens Ticket” and the APA. The Journal, which opposed the Brotherton group, reprinted Stein’s tirades in full on the two days before the election. When the APA-backed ticket was defeated Stein was not modest about taking credit.

Stein editorialized for extending saloon closing hours from 10 p.m. till midnight, blasted Joel Hurt for doubling streetcar fares during the Atlanta Exposition, and took a special joy in dredging up the moral shortcomings of the city’s clergy. He denounced militarism and lynching, but was savage in his ridicule of blacks and rural whites, especially those who attempted to make themselves heard in politics. The Atlanta dailies appreciated having Stein as a lightning rod and probably fed him stories too hot for their own pages, but he was regularly and roundly denounced in the state’s rural and religious press. He gave back as good as he got. Typical is a blast at the Macon News:

…it may be just as well to say a word or two concerning the journalistic monstrosity in question and the large mouse-colored jackass who edits it… It would be just as impossible for it to print a fair and honest criticism as it would be for Johanna the gorilla to warble an aria from Faust… The Looking Glass is not informed as to who does the principal braying on the News, but it would advise that individual, whoever he may be, to invest in a bottle of bromo-seltzer and an English grammar…

Stein had dished out such and worse for several years with his circulation unhurt and his ribcage unventilated. He felt completely confident in November 1895 when he began his campaign against Atlanta Criminal Court Judge John D. Berry. Berry was barely 30, a heavy drinker and a prominent figure in the “fast set” of the upper reaches of Atlanta society. His father and uncle were influential judges who had worked hard for the election of Governor William Y. Atkinson. Atkinson promptly backed young Berry for a vacant judgeship despite the protests of the majority of the Atlanta bar and State Senate President W.H. Venable. Berry had hardly been confirmed before Stein was detailing the political deal and castigating him as incompetent to sit upon the bench.

Orth Stein had flung his harpoon into the innermost citadel of power and had, as the saying is, caught a tartar.