Judge John D. Berry had been a target for editor Orth Stein’s wit and outrage in the pages of The Looking Glass for a year and a half. Stein attacked Berry as incompetent and negligent, denounced his verdicts and labeled him a coward who failed to respond to verbal and physical attacks from his aristocratic peers at the Capital City Club, On March 3, 1998, Berry had been beaten at the club by the two James W. Englishes, father and son. On March 12, Stein defended Mr. English Sr.’s attack in The Looking Glass. 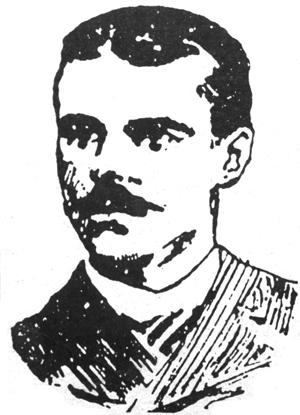 At 7 in the evening on March 14, Stein had finished supper in the dining room of the Kimball House, the Atlanta hotel where he lived. He was at a table with the aisle on his right. Facing him across the table was Paul Severance, an 8-year-old boy to whom he was reading a newspaper article. As Stein read, Paul Severance saw a man get up from another table and approach Stein quickly from behind. The man picked up a full ketchup bottle and shattered it against the right side of Stein’s head. The man was Judge John Berry of the Atlanta Criminal Court.

Stein fell stunned to the floor. Berry leapt on his chest. The two men struggled for a pistol which each later claimed to belong to the other. Berry grasped the pistol; Stein managed to open the cylinder and let the bullets falls out. Berry then smashed Stein in the face with the gun, got up and left the dining room. Stein was helped to his room where doctors made several stitches; his condition was considered serious. He made a brief statement saying that he had no idea that Berry was in the restaurant and did not know his attacker’s identity until after the attack.

Berry said that someone had told him that Stein had “looked jeeringly” at him. He said he had tapped Stein on the shoulder and called his name before smashing him in the head, admitting that he had not given Stein time to respond or even look around. He made a whining defense of his assault, saying that Stein had been “endeavoring to make the community despise and hate me.” Around the state and region, dozens of newspapers denounced Berry as an unworthy coward. The Gainesville Eagle noted

It was Governor Atkinson who discovered that Berry was a good piece of timber for the city judgeship. No one had ever thought of it before. He had been living in Atlanta for some time and was known as a pretty fair accordion player—but no one had ever imagined him fit for city judge.

Stein’s staff continued to get The Looking Glass out. The paper lashed Berry as “a rich and dissolute young clubman, who, like many of his ilk, pretended to be a lawyer. He had no practice and no experience… He drank continually to excess, his habits became one of the scandals of the city.”

On March 28, the Englishes, Berry and Stein were indicted, the Englishes and Berry for assault, and Stein, again, for carrying a concealed weapon. The cases were postponed until June. The Englishes pled guilty and were fined. Judge Berry pled innocent but was found guilty and fined. Stein’s case was carried over because of the illness of his attorney, W.C. Glenn. Glenn died a week later and Stein published a tribute to him in the Journal. John Berry continued as judge for eight months, then quit very suddenly and returned to his parents’ home in Newnan where he died two weeks later from chronic heart disease.

He told a Journal reporter that he was going to start an insurance trade paper which would let him devote more time to writing short stories. The new editor of The Looking Glass was T.C. De Leon, a prolific and (at the time) well-known Mobile newspaperman, novelist and dramatist. De Leon made it plain that The Looking Glass would avoid politics and would tread more lightly than had been Stein’s habit. The policy was a disaster; the paper folded within weeks of Stein’s departure. Stein soon announced that he had had a falling-out with his new partners and now would publish a rival insurance paper of his own. It never happened.

Did Stein really quit The Looking Glass, or was he forced out by the paper’s other stockholders? His increasing virulence and criminal record and the undoubtedly fierce pressure of his enemies may have forced his partners to replace him.

Stein may have made the decision himself. He had apparently published many short stories in national magazines, characteristically under assumed names, and wanted to devote his energies to fiction. Stein had cheated death many times and was very sensitive to life’s lack of guarantees: A few months earlier he had met his idol and kindred spirit, W.C. Brann, for the first and last time. Brann edited the Waco, Tex., Iconoclast, an outrageous weekly with a national circulation of 100,000 which skewered anything and anyone in its path, most particularly the Southern Baptist Convention. Shortly after meeting Stein, Brann was gunned down in a duel with a Baptist zealot on the streets of Waco. One of Stein’s last pieces for The Looking Glass was a heartfelt, gloomy tribute to the martyred editor. The possibility of sharing Brann’s fate was clearly not far from his thoughts.

There was one more thing. Stein might dodge bottles and bullets but he could not escape the bacilli that wasted his emaciated body and filled his lungs with blood; since before he had come to Atlanta, Orth Stein had been dying of tuberculosis.

In the summer of 1898 he left Atlanta for good to finish his life in the city that was his true home, New Orleans.