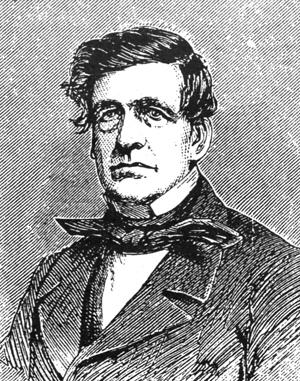 Sol Smith’s traveling theatrical troupe, consisting of himself, his wife Martha, his younger brother Lemuel and several others, arrived in Milledgeville during the last week of October 1832. Their Georgia tour had not been lucrative, but they had every hope of a big profit playing to the monied crowds who descended on the capital for the annual session of the General Assembly.

The Smith company had been accompanied across Georgia in the summer and fall of 1832 by Mirabeau B. Lamar of Columbus who was canvassing the state as an independent candidate for Congress (Georgia’s congressmen were then elected at-large). Lamar, a member of one of Georgia’s most prominent families, was the founder of the Columbus Enquirer and would soon leave for Texas, where he would play a major role in the revolt against Mexico and serve as president of the Republic of Texas. Somewhere in the course of their travels, Sol’s brother Lemuel, then 27, also made the acquaintance of a less savory representative of Putnam county’s Huguenot plantation gentry, William Flournoy of Eatonton.

Flournoy was descended from a Virginia family that came to Georgia and prospered greatly after the Revolution. During the first century in Georgia the Flournoys produced a number of Methodist ministers, legislators, newspaper editors, lunatics, murderers and murder victims. Who William Flournoy’s parents were and exactly what his relation was to Athens’ eccentric philosopher John Jacobus Flournoy and others of the remarkable family, I have not yet determined. In 1832 he was a fairly young and very wealthy man who owned plantations in Putnam, Greene and Muscogee counties. Flournoy seems to have conformed to the general pattern of young Southern planters in the generation before the Civil War; he drank heavily, cultivated a hair-trigger sensitivity to real and imagined insults, and went about with a pistol of sufficient caliber to lend earnest weight to his tender feelings.

William Flournoy had come from Eatonton to nearby Milledgeville in the late autumn of 1832 for the sitting of the General Assembly. This was a gala time for Georgia’s landed elite, far outstripping even commencement week in Athens as an opportunity for pleasure, socializing and business and political skullduggery. In addition to balls, banquets, concerts and the theater, Milledgeville offered the pleasures of establishments such as that of Mrs. Phoebe Brown of West Franklin Street, located a few blocks from the governor’s mansion and convenient to the Statehouse.

In 1832 Phoebe Brown had been managing her house of discreet assignation for at least 20 years. Hers was the only brothel in Milledgeville with a liquor license, the steep bond for that privilege having been posted in her behalf in 1813 by Farish Carter, the wealthiest citizen of the state. Business was good on the night of Dec. 12, 1832. (Smith gives the month as November in one version and December in another—the later date seems more likely.) The clientele at the bar that evening included at least one member of the General Assembly; young Lemuel Smith, fresh off the stage of the Milledgeville Theater where he had just finished playing Glenalvon in the tragedy of Douglas, or The Noble Shepherd; and the tipsy and touchy William Flournoy.

Exactly what took place that evening and what had previously transpired between Lem Smith and William Flournoy will never be known. Sol Smith says only that “words passed between them on some trifling subject.” A friendly legislator took Lem Smith aside and warned him that Flournoy was not to be trifled with. Lem replied, according to his brother’s account, “that if Flournoy wanted anything of him he might come on” and pointed to the pistol handle poking from his pocket.

Flournoy heard or was told of this exchange and approached Lem Smith in a seemingly friendly way, saying “Come, let us settle this matter,” motioning towards the bar, and asking Lem Smith what he was drinking. Smith said beer and Flournoy ordered him a glass, as well as a brandy for himself. They drank amicably, put their glasses down on the bar, and then Flournoy pointed to Smith and said, “This is the damned rascal who insulted me at Eatonton.” Pulling out his pistol, he cried, “Clear the way, gentlemen!” The crowd parted, two shots went off, and Lemuel Smith fell to the floor, shot through the chest. His pistol, loaded only with powder, had gone off in his pocket.

He had never been to Eatonton in his life.