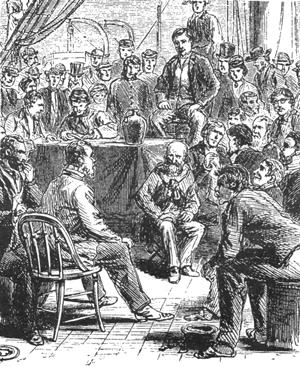 Sol Smith, traveling actor and theater manager, was awakened in his Milledgeville, Georgia, hotel room shortly after midnight, December 13, 1832, with the news that his younger brother and star performer Lemuel lay shot through the chest on the barroom floor of Phoebe Brown’s whorehouse, less than a mile away. Smith found his brother fully conscious and in great agony in a puddle of blood. He and some friends put Lemuel in a buggy and carried him to the hotel, where doctors gave him only a few hours to live. Lemuel identified William Flournoy as his killer but would not speak of the causes of the shooting. He died after three hours, and his body was buried in Milledgeville.

William Flournoy had fled Phoebe Brown’s establishment after shooting Lemuel Smith. A coroner’s jury brought a verdict of willful murder against him, and the governor offered a reward for his capture. Flournoy remained in hiding for six months, turning himself in in the summer of 1833. Although a fugitive charged with the most serious of crimes, William Flournoy was allowed bond of $20,000, which he easily made. He retained the entire bar of Baldwin county as his counsel and resumed the life of a wealthy pleasure-seeker.

Sol Smith was devastated by his brother’s death, but managed to continue with his theatrical obligations. He finished his Milledgeville engagement on December 23 and went on to play Macon, Columbus and Montgomery. At the end of February, 1833, Smith and his wife went to Cincinnati, where they had many relatives. Here Smith threw himself into the study of the law so that he could be admitted to the Georgia bar and assist in Flournoy’s prosecution when he should eventually come to trial.

The Smith troupe was back in Georgia in the fall of 1833. Flournoy had by now turned himself in, made bond, and gotten his trial postponed until February. Sol Smith found himself in a dilemma. As a celebrity he was known on sight by hundreds, if not thousands, of people whom he did not know. Men were constantly shaking his hand, and he was often in groups where general backslapping and handshaking were expected. He had never seen Flournoy nor did he have a clear notion of his appearance. In horror of unwittingly grasping the hand that took his brother’s life, he refused physical contact with anyone not personally known to him for the rest of his stay in Georgia.

The Smith troupe were in Milledgeville when the Statehouse caught fire on November 16 and Smith helped in putting out the fire. At this time Smith ran humorous letters in the Milledgeville papers complaining that the night sessions of the General Assembly were cutting into his theater attendance. Three days after the statehouse fire Colonel William Ward quarreled with Robert McComb, the wealthy proprietor of Milledgeville’s Eagle Tavern. The two men shot each other on the tavern steps; Ward’s wound was mortal. As McComb lay wounded in front of his tavern, Henry Byrom, a close friend of Ward’s and a notorious gambler and duelist, leapt upon the steps, denouncing McComb and his friends as cowards and promising vengeance for Ward. After several hours of ranting, he rushed a crowd of McComb’s friends in the tavern and died instantly in a volley of gunfire. His body still lay on the tavern steps the following morning, pistol in hand.

Smith had known Ward and visited him on his deathbed upstairs in the tavern. The following morning he stepped up to a circle of men discussing the previous night’s slaughter. The man facing Smith was showing the group where he thought Ward had been shot. Smith said “You are mistaken” and reached over to touch the correct spot on the man’s velvet vest. As he did, Smith claimed that he felt a sensation like an electric shock and that he and the man both fell backwards away from each other. Bystanders rushed up to drag both men away. Smith said, “That is Flournoy.”

Many of Smith’s Georgia friends urged him to take personal vengeance on Flournoy, but Smith, both from a Yankee distaste for Southern notions of honor and vengeance, and from respect for Flournoy’s marksmanship, refused. His troupe went on to Columbus and Montgomery, and in the first week of February he returned to Milledgeville to assist in the prosecution of William Flournoy.