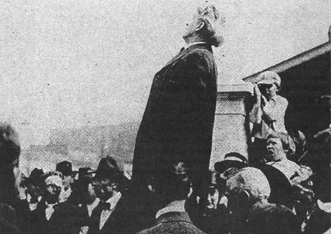 By 1917 Watson had long quit any show of sympathy toward African-Americans.

After nearly three years of strained neutrality the United States entered the Great European War in April 1917. Strong pro-British feeling, based partly on sentimental ties to “the mother country” and, more substantially, by deep industrial and baking connections between U.S. and British capital, overwhelmed the neutralist and isolationist tendencies of leftists, farmers, agricultural capitalists and many immigrants.

Resistance to the war and to the powers granted by the president by Congress aroused opposition throughout the country. Particularly resented was the draft, the first in the U.S. since the Civil War. Last week we looked ar the skepticism of Georgia’ senators toward the war effort, and at some grassroots opposition in northeast Georgia. This week we will continue with a closer look at the leader of Georgia’s antiwar movement, Thomas Edward Watson.

Tom Watson was born in 1856 near Thompson, Ga., 60 miles east of Athens. As a child he saw his family’s fortunes wrecked by the Civil War. He rose from poverty as a successful lawyer, but was not content to amass a personal fortune while Georgia farmers sank steadily into debt and misery. He entered politics and was one of the first Democrats to bolt in the new People’s or Populist, Party in the late 1880s. Watson called for radical economic measures and full political and economic (though not social) rights for African-Americans and denounced militarism and imperialism. He served two terms in Congress but was defeated in a campaign of fraud and violence orchestrated by the state Democratic organization. He ascended to national leadership of the Populist Party just as it was falling apart.

Watson ran two quixotic campaigns for vice-president (1896) and president (1904) of the United States, then drifted into seclusion. Chronic depression, thwarted ambition and addiction to liquor and morphine transformed him into a capricious, ireful monster, a monster adored by tens of thousands of rural Georgians, many of whom did not blush to compare him with Jesus. His weekly newspaper, The Jeffersonian, whipsawed his followers one way and another, manipulating their votes and keeping Watson the kingmaker of Georgia politics, dominating the party he despised and forcing his old political enemies to crawl to him for support.

By 1917 Watson had long quit any show of sympathy toward African-Americans. His rhetoric was abandonedly racist, and he had added Catholics and Jews to his index of demons. He retained mistrust of big business, banks, the military and organized religion. Watson’s weekly blasts of racial and religious hatred and his role in the prosecution and lynching of Leo Frank played a crucial part in the creation of the second Ku Klux Klan.

But Watson parted with his robed offspring on the subjects of war, imperialism, government coercion and radicalism. Watson had opposed the Spanish-American War in 1898, but many Populists had supported it, including Hart County state senator Yancey Carter who had received a colonel’s commission and led Georgia troops in Cuba. Carter and other old Populist leaders from Georgia such as Joe H. Scott and William M. Hairston supported American entry into the First World War with varying degrees of enthusiasm. Still, many of Georgia’s “old Pops” cheered Watson as he defied the harsh sedition laws and poured venom on Wilson and the war.

David Blodgett, an Iowa congressional candidate, reprinted passages from Watson’s antiwar writings and was sentenced to 10 years in federal prison. In August 1917 Postmaster General Burleson denied use of the mails to Watson’s Jeffersonian on the grounds that it was treasonable. Watson challenged the mail ban in federal court, simultaneously taking up the cause of two black men imprisoned in Augusta for failing to register for the draft. Both cases were heard on the same day by U.S. Judge Emory Speer. As a young U.S. representative from Athens in the late 1870s Speer had preceded Watson as the political champion of northeast Georgia’s black and white small farmers and working people, but he had cozied up to the Republicans, and for decades had served as federal judge. He was growing old and cranky and insisted on holding federal court in the yard of his summer home in Habersham county village of Mount Airy. In the third week of August 1917 huge crowds converged on the little town to hear Watson’s arguments against conscription and censorship.